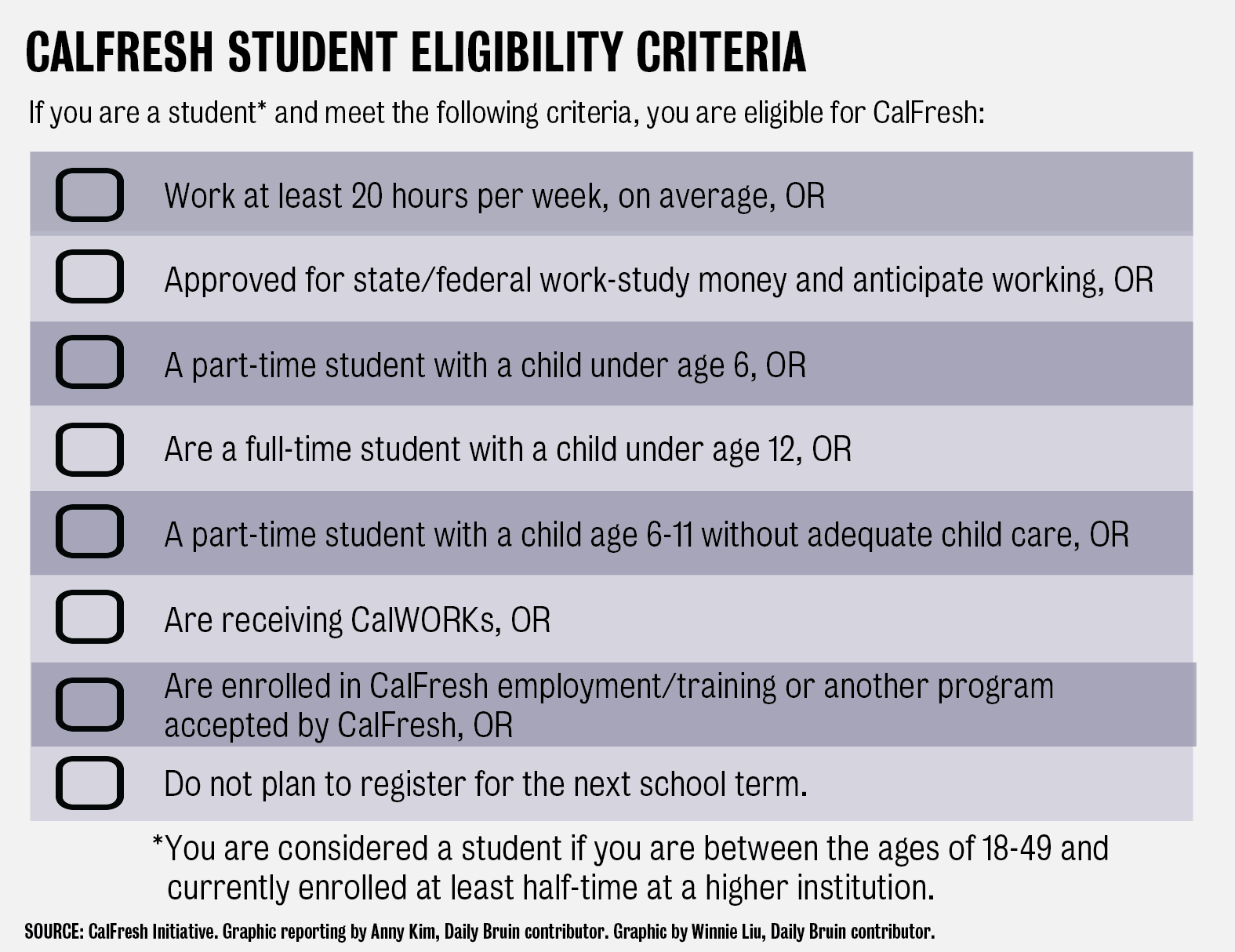 A team of five undergraduate women is trying to combat food insecurity on campus.

Students can receive between $20 to $194 per month if they meet certain eligibility requirements, which include having dependents, working for at least 20 hours a week or being enrolled in some work-study or job training programs.

Gardner, a third-year environmental science and political science student, started the team in February as part of a project for the University of California’s Global Food Initiative fellowship. It currently consists of three outreach interns and two graphic designers.

Gardner said she thinks enrolling in CalFresh could help give low-income students a sense of autonomy and a source of longer-term financial wellness.

“If you are food insecure and not making ends meet, CalFresh gives you the option where you don’t have to take loans out for food or go to a place that’s too (far from campus),” Gardner said. “We’re just trying to break the system and let students know that’s there.”

However, many students do not enroll because they do not know about the program, are unsure about eligibility or worry that CalFresh might affect their financial aid, said Shelly Dieu, a second-year geography and environmental studies student and one of the outreach interns. Dieu added the program does not affect financial aid at all because it is a state benefit.

Only one percent of students are enrolled in CalFresh at UCLA, even though about 42 percent are reported to be food insecure throughout the UC, according to the 2016 UC Student Food Access and Security Study.

“That’s a gap we want to bridge or close with CalFresh,” Gardner said. “There’s no reason we should be going to an institution of higher education and be food insecure or housing insecure.”

She said she found out about the program because she grew up being food insecure, and felt there was a sense of shame around it. She added CalFresh empowered her and gave her options to work toward her own health.

“I’ve gone through that process and I feel like it’s my duty to ensure that other people on campus can go through it too,” Gardner said. “I want to make sure Bruins are enrolled in CalFresh if they need it, until there are longer-term systemwide changes.”

The team has mostly been providing technical support and information for students, Dieu said.

“We just wanna make the process easier and more accessible,” she added. “People can enroll themselves online, but the application is just very confusing for someone who isn’t familiar with CalFresh, and it might turn people away from getting these resources.”

She added that if students want to sign up but are not eligible for CalFresh, the team would point them to other food security resources on campus.

Dieu said the group’s long-term goal is to institutionalize CalFresh at UCLA, and create an office or a compensated position on campus to enroll students.

The team started meeting with administration and campus groups, and also hopes to work with the financial aid office to give eligible students notifications about CalFresh in their financial aid packages.

“Our goal is not to work anymore,” Dieu said. “If the school could spread a lot more awareness of CalFresh materials and resources, our job wouldn’t have to exist.”

The Food Security Working Group funded the CalFresh Initiative with about $4,000 out of this year’s $151,000 allocation from the UC Office of the President to address food security. There will likely be funding support next year as well, said work group chair Antonio Sandoval.

The team plans to have enrollment events every quarter, and the next one will be in fall, Dieu said.