Professor works to clear up effects of dust on climate change 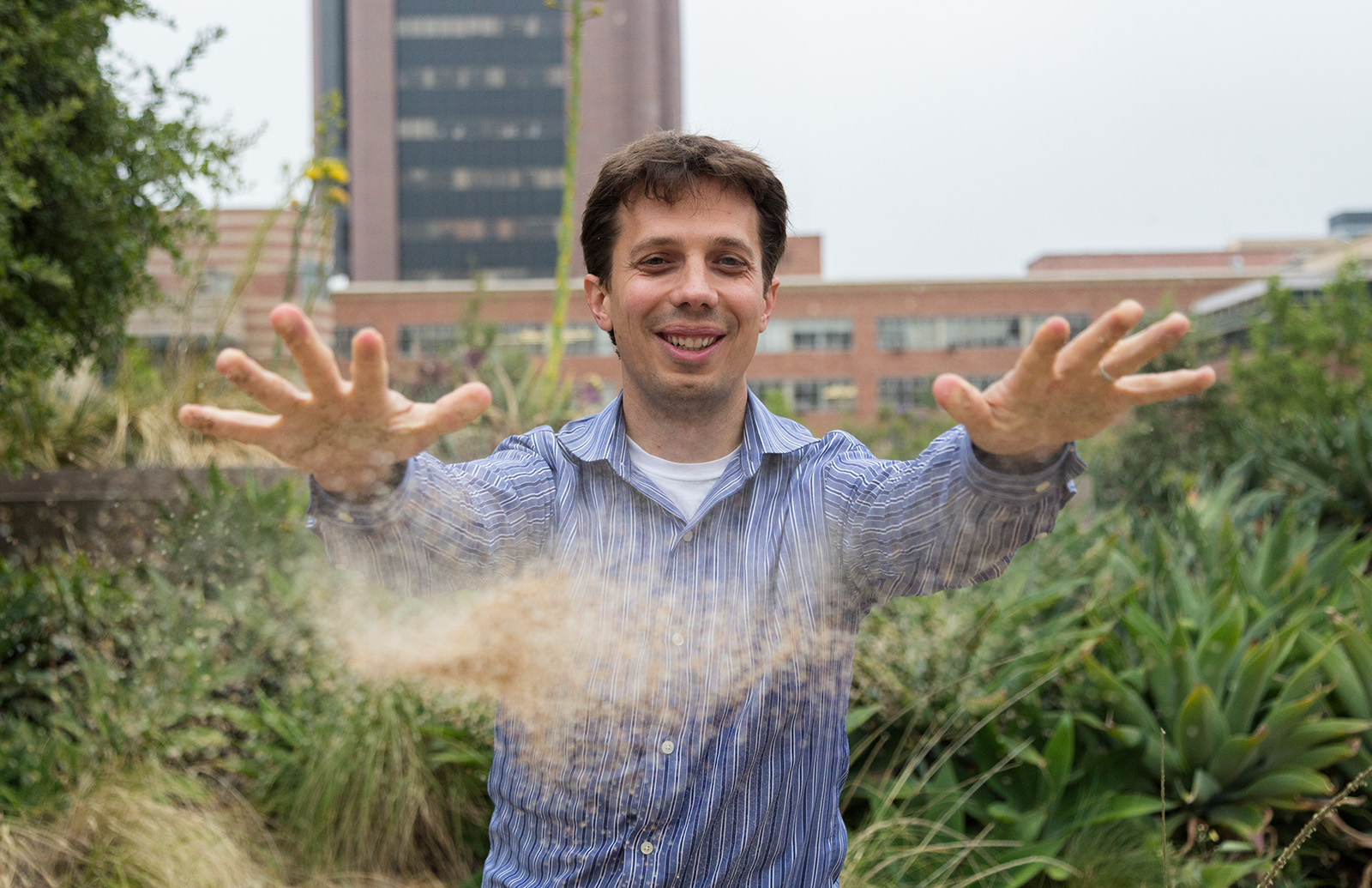 Jasper Kok, an assistant professor of atmospheric and oceanic sciences, is helping elucidate the role dust plays in climate change. He said dust can have either a net cooling or net heating effect on the atmosphere depending on the size of the particles. (Owen Emerson/Daily Bruin senior staff)

Dust in the air can alter climate change in unpredictable ways, according to UCLA researchers.

Jasper Kok, an assistant professor of atmospheric and oceanic sciences, published a paper in April detailing how aerosols such as desert dust can cause temperature and precipitation levels to fluctuate, accelerating climate change.

Kok said aerosols, or particles in the air, are important to consider in modeling climate change because the specks can scatter and absorb sunlight like greenhouse gases.

Additionally, aerosols can often act as the scaffolding upon which clouds can condense. Clouds regulate the temperature of the atmosphere by deflecting incoming sunlight or preventing heat from escaping into space.

“I think (studying desert dust) is the coolest because it’s a natural process, but it’s very much affected by human activity,” Kok said.

Kok said the Salton Sea, a saline lake in California’s Coachella Valley, shows how human actions can cause desertification. Changes in land use and irrigation led the Salton Sea to shrink in size, leaving behind a desert-like landscape that stirs dust up into the atmosphere, he said.

As a desert grows, the dust it produces leads to the atmosphere heating up, leading to more desertification and more dust in the air, Kok said.

Kok said he was able to detect the highest concentrations of desert dust in the atmosphere by using satellite imagery. He added graduate students assisted in data collection by venturing into dust storms to measure the emission, size and quality of dust particles.

He said extraneous variables such as soil moisture and human activity can make it difficult to determine the impact of atmospheric dust on climate change.

“What will happen in the future is very unclear,” Kok said. “It depends on many different factors.”

For example, desert dust may have either a net cooling or net heating effect on the atmosphere, either by acting as a shield for solar radiation or acting like a greenhouse gas. While he said his models have allowed him to predict that desert dust would have a net cooling effect, he added there is also a 25 percent chance that the effect is the opposite.

Qing Zhou, a statistics professor, said he helped Kok determine the uncertainty in the model’s estimates. Zhou said he helped Kok combine multiple data sets to make the most accurate predictions about the effects of dust on the climate.

“For each model you may have different accuracies – some models are more accurate and some are less accurate, so we need to weight them to get the best combination,” Zhou said.

He added it was tricky to determine how best to weigh each individual parameter in the models because there were so many variables present.

Yue Huang, a graduate student in atmospheric and oceanic sciences who is also working on a project that will help validate Kok’s climate change simulations, said Kok’s models still need to be confirmed by real-life observations.

Huang said she is researching how different global regions experience different temperature changes depending on the size of the dust particles in those areas.

“Kok is the first to point out that the size of dust matters in climate change,” Huang said. “Previously, models were limited to two different kinds of dust – large dust and small dust. His research found that the differing sizes matter a lot.”

Kok’s research uses a spectrum of dust sizes, which has allowed him to determine that the smaller the dust particle, the more robust the cooling effect, Huang said. For larger particles, the effect seems to reverse, with the dust acting to trap heat in the atmosphere.

“It’s important to assess the role of dust in climates where you have a lot of it – the Middle East, Central Asia, Northern Africa. Shifts in dust could really impact temperature and precipitation,” Kok added.