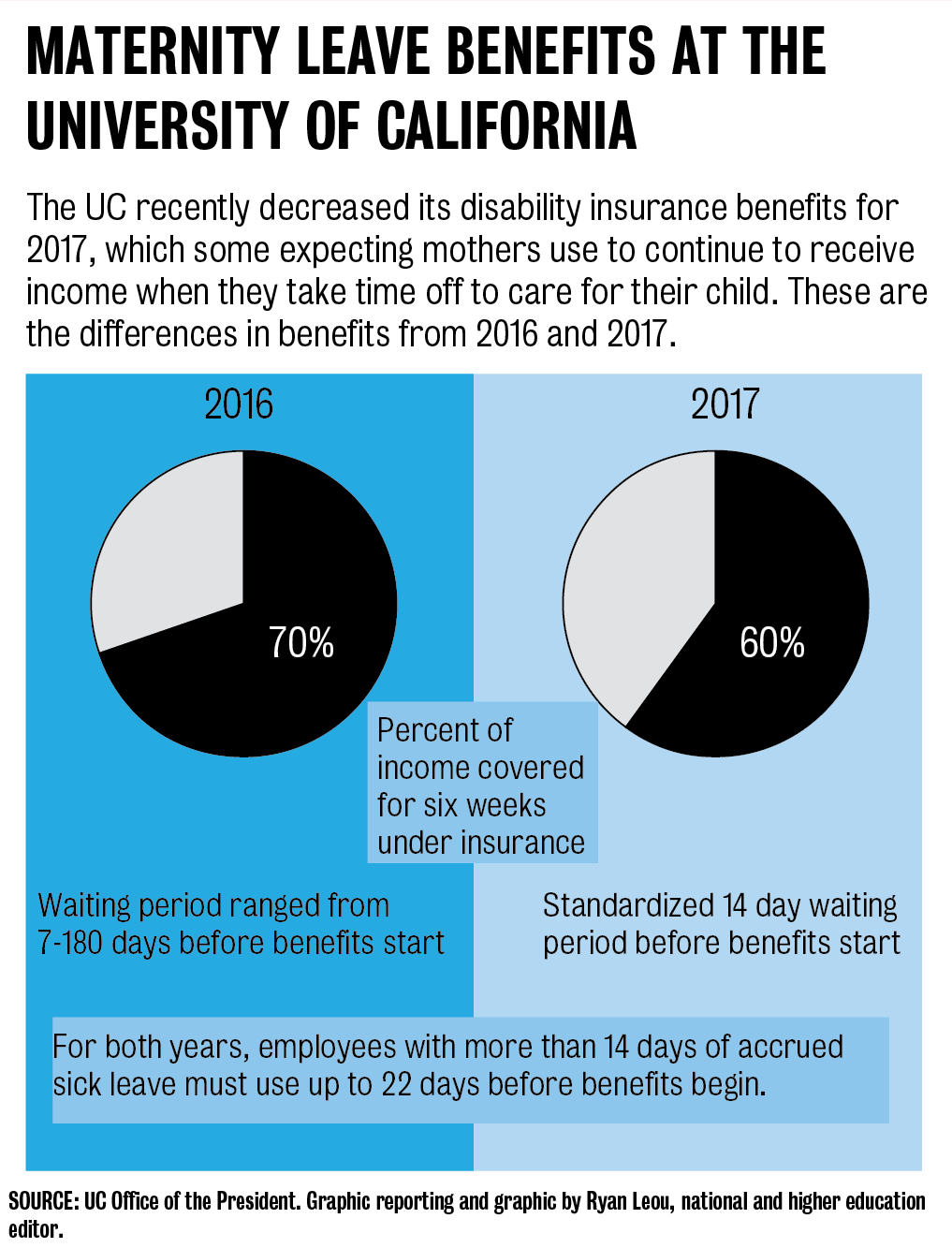 Correction: The original version of the graphic incorrectly stated there was no waiting period for disability insurance in 2016. In fact, the waiting period ranged from seven to 180 days.

Some UCLA employees are concerned a decrease in disability insurance could hurt new mothers, who use it as a form of maternity leave.

Emily Taylor, an expecting mother and director of the master of business administration career education and communications at the UCLA Anderson School of Management, said she recently discovered the change in the University of California’s short-term disability insurance.

UC spokesperson Stephanie Beechem said in an email that the UC’s disability insurance in 2017 now only covers 60 percent of an employee’s income for six weeks, compared to 70 percent in 2016. Additionally, the UC instituted a standardized 14-day waiting period, which previously ranged from seven to 180 days depending on insurance plans, for employees before they can receive benefits. During the waiting period, employees can use sick days or vacation days to continue to receive pay.

Beechem added that if employees have accrued more than 14 days of sick leave, they must use up to 22 of their sick days before benefits begin.

Taylor also said she was shocked that UCLA, one of the largest employers in Los Angeles, did not extend benefits comparable to other employers such as USC.

She added she thinks UCLA does not offer enough resources even after a mother returns to work. For example, UCLA’s childcare costs about $2,000 a month for employees.

Masha Taylor, also an expecting mother and operations manager for the Center for Global Management at Anderson, said she thinks UCLA’s benefits are not as great as the university claims.

“It’s unfair that UCLA and the whole UC system always say how great benefits we have, especially for maternity leave,” Masha Taylor said. “It’s not good at all. All my friends that are working in the private sector get paid maternity leave through their companies.”

Taylor added that as a UCLA employee, she is not eligible for state benefits because the UC does not pay into the California State Disability Insurance program, which provides employees up to six weeks of paid leave per year to care for family members.

“Not only do we not get paid maternity leave, we don’t even get the state benefit,” she said.

The UC is not subject to SDI, according to UCLA Human Resources, though new employees can collect the SDI benefit up to 18 months into their job at the UC.

Chelsea Harder, director of the Applied Management Research Program at Anderson and also an expecting mother, said she only found out about the policy when a colleague started asking human resources for more details about the change.

“It (means) extra planning, calling upon family and considering options I don’t want to consider, like putting my child in daycare at 2 months old,” Harder said.

Some of Emily Taylor and Harder’s colleagues who gave birth while working at UCLA took months off without pay, Taylor said. She also said she knew people who had to dip into their savings or pick up side jobs to avoid going into debt.

Harder added she does not like having to use more of her own sick days because she thinks they should be used for emergencies to care for her child.

Masha Taylor said she does not think the UC should make cuts on maternity leave in general.

“I feel like maternity leave is not the place where we should be cutting benefits, especially when the whole state is trying to give more to maternity leave and a lot of companies in California are supportive (of) maternity and paternity leave,” she said.