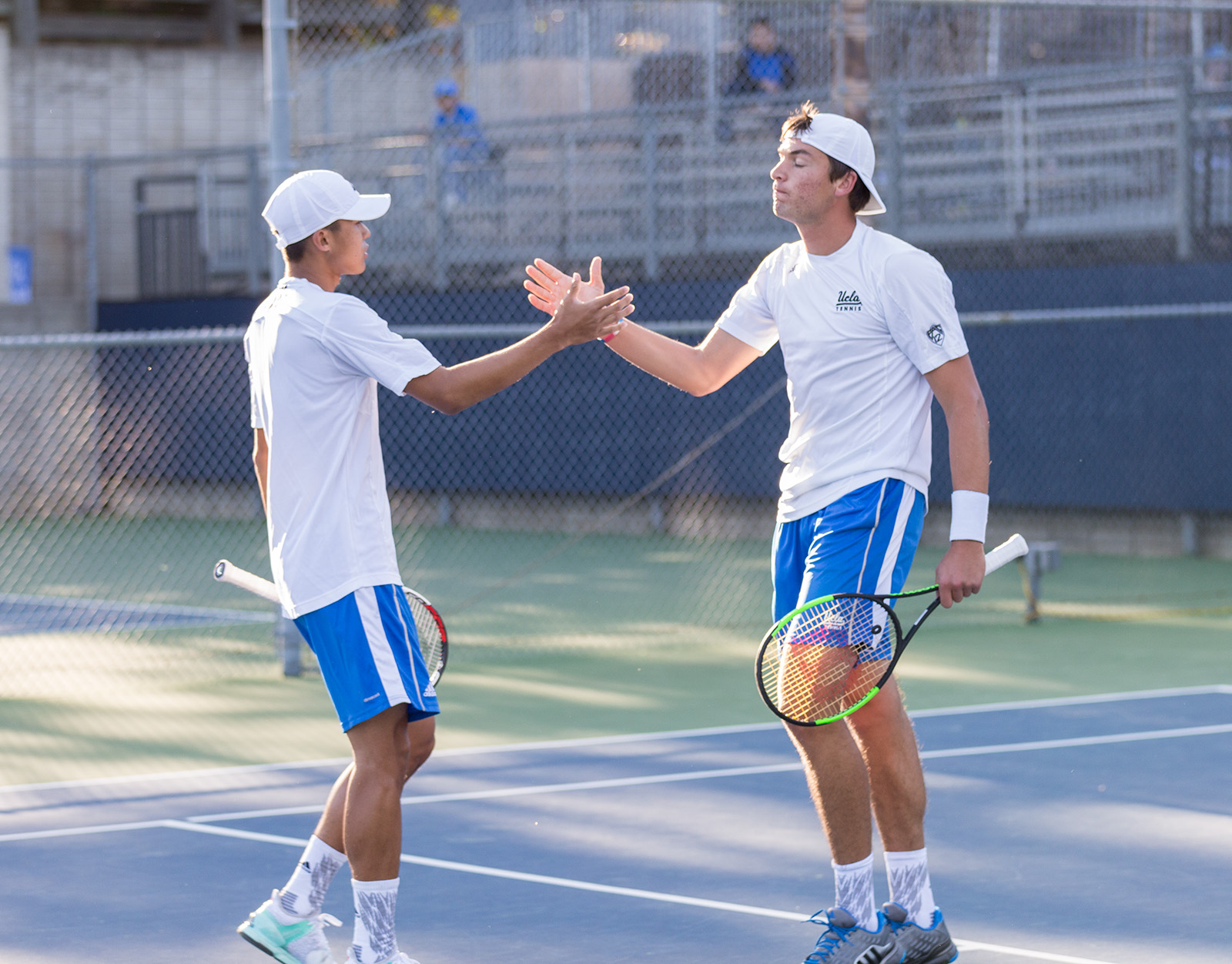 Freshman Evan Zhu (left) and junior Martin Redlicki were the No. 2 seed in this year’s NCAA individual doubles bracket, but they lost to Oklahoma’s Andrew Harris and Spencer Papa in the quarterfinals. The Bruin duo ended the season with a 21-5 record and a 17-3 mark in dual matches. (Kathy Chen/Daily Bruin)

After losing in the quarterfinals of the NCAA Tournament last season, UCLA men’s tennis claimed the individual singles and doubles titles.

This year, there would be no repeat.

Junior Martin Redlicki and freshman Evan Zhu, the No. 2-seeded pair in the 32-team bracket, lost in the quarterfinals to the eventual champions, unseeded Andrew Harris and Spencer Papa of Oklahoma. In singles, an unseeded Redlicki lost in straight sets to his first-round opponent, No. 5-seeded Christopher Eubanks of Georgia Tech.

UCLA’s doubles pair started the tournament with two consecutive 6-3, 6-3 victories against Auburn’s Maxime Hinnisdaels and Conner Huertas and Texas Tech’s Connor Curry and Bjorn Thomson, respectively. In the Bruins’ second match, they took a while to find their footing after facing an early deficit against the Red Raiders.

“We came out, not slow, but the other guys came out really strong. They were hitting some really good balls, got an early break and went up 2-0,” Redlicki said. “We bounced back really well, got the break back for 2-all and then from there it was smooth sailing for us. At the end there, got a good hold from 0-40 down and that pretty much sealed it for us.”

Unlike last year, when the No. 2-seeded team of Redlicki and then-junior Mackie McDonald captured UCLA’s first doubles title in 20 years, Harris and Papa ended the Bruins’ tournament run. Redlicki and Zhu finished the season with a 21-5 overall record, including 17-3 at No. 1 doubles in dual match play.

On the women’s side, freshman Ena Shibahara represented UCLA’s best chance at winning an individual title. The No. 4-seeded Bruin was the highest remaining seed after she defeated Texas A&M’s Rutuja Bhosale 6-4, 6-2 in the first round. Shibahara’s next match featured a rain delay early in the second set, but once play resumed, she broke four times en route to a 6-3, 7-5 victory over Arizona’s Lauren Marker.

“I feel like I started off really well and was hitting it well in the beginning,” Shibahara said. “I had a hard time getting back into the rhythm after the delay, but I figured it out. I made three first serves and held and got the win so I’m pretty happy about that.”

Shibahara’s run came to an end against Vanderbilt’s Sydney Campbell, however, in the only round-of-16 match between two seeded opponents. The freshman, who was named the Intercollegiate Tennis Association Rookie of the Year last week, surrendered early breaks in both sets, eventually falling 6-2, 6-4. She ends her season with a 40-7 singles record and an 18-3 mark in dual match play at No. 1 singles.

The doubles tournament was also the first time Shibahara and redshirt freshman Jada Hart competed together since late February.

Facing South Carolina’s Hadley Berg and Paige Cline in the first round, UCLA lost the opening set 6-3 and was forced to retire down 5-2 in the second set after Hart suffered an injury. The freshman duo completed the year with a 14-5 doubles record.