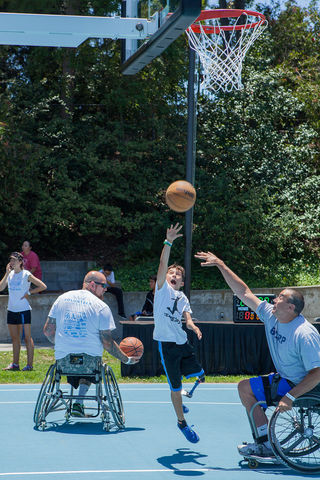 Angel City Sports is an adaptive sports organization that will host its third annual games at UCLA in late June. The games are a way to expose more people to adaptive games in the Los Angeles area. (Courtesy of Angel City Sports)

Angel City Sports, an organization for adaptive athletes, will hold their annual games at UCLA from June 22 to June 25. The games are in their third year and will feature five Paralympic sports this year. The Daily Bruin Sports editors sat down with co-founders Clayton Frech, a UCLA Anderson School of Management alumnus, and Michael Garafola, UCLA’s Adaptive Recreation Program coordinator, to talk about their inspirations, organization, and goals for the Angel City Sports organization.

Daily Bruin: What’s the difference between the adaptive games and the Special Olympics?

Clayton Frech: Everybody thinks it’s the same thing, but Special Olympics is for people with intellectual disabilities and is an inclusion program. We’re part of the Paralympic movement for people with physical disabilities. We’re just sports that have been changed so basketball is in a chair instead of standing, and tennis gets two bounces in a chair. We’ve just adjusted the rules for Paralympic sports or adaptive sports.

DB: Tell me what inspired you to start the group?

Michael Garafola: Clayton’s son, Ezra, was born missing his left knee, left fibula, and four of five fingers, but was always an elite athlete since he was young. And Clayton was like, “Hey, who runs adaptive athletics here at UCLA and why isn’t there more going on?” and this was three years ago. We just had a heart-to-heart and we were kind of in awe like, “You want to do that? I want to do that.” Clay was at the Endeavor Games (an adaptive sports competition) in Oklahoma City and was like, “Why don’t we have one here in Southern California?”

DB: What is the impact Angel City Sports has had on kids and impaired athletes?

MG: When you donate your money, time or equipment to help people get back into sports, it’s an investment. We know from experience, from Ezra and myself, that when you help people get back to sports, it’s changed our lives. Maybe we wouldn’t be as active, as eloquent. We’re always seen as a charity, but we don’t want people to feel bad. We want the opportunity to be included because not everyone has the resources or the time – like the poor kid in East LA or Orange County or wherever. So that’s why we wanted to bring programming to Los Angeles and help grow the movement. We don’t have the opportunities at the rec centers, the equipment’s expensive, the translation barrier – there’s a lot to overcome.

DB: What motivates you to keep doing what you do?

MG: This is why we do it – even if it’s just one person. (A participant) uses a wheelchair and every time she’s there at wheelchair basketball (at Wooden Center) – she’s getting better and making baskets now – I’m like, “Hey, thanks for coming out.” And she texted me back last time saying “(Her friend who does not have a disability) and I were just saying how amazing it was that we could make baskets now. It’s a little weird though. I never, ever imagined that I would be playing sports in college.” This woman in a wheelchair didn’t even think about playing sports, but now she can and hopefully continue that for the rest of her life. My ultimate dream is to have a college adaptive sports program.

DB: Where do you see the future of adaptive sports?

CF: We’re trying to build this adaptive sports program in all schools so that kids have options for where to go. They don’t have to pick between sports or academia and bringing it to all schools will build it. A little Pac-12 or club system competing against USC, Arizona or ASU, that’d be great. We can do this. For right now where we’re going with the Angel City Games – it’s Southern California’s own Paralympic Games. We don’t care if you’re elite like the Paralympic teams or (about) any qualifying times. People are coming from all over the U.S. this year from Florida and the East Coast and even from Trinidad. It’s a welcoming environment for new athletes and hopefully something that can build a movement.