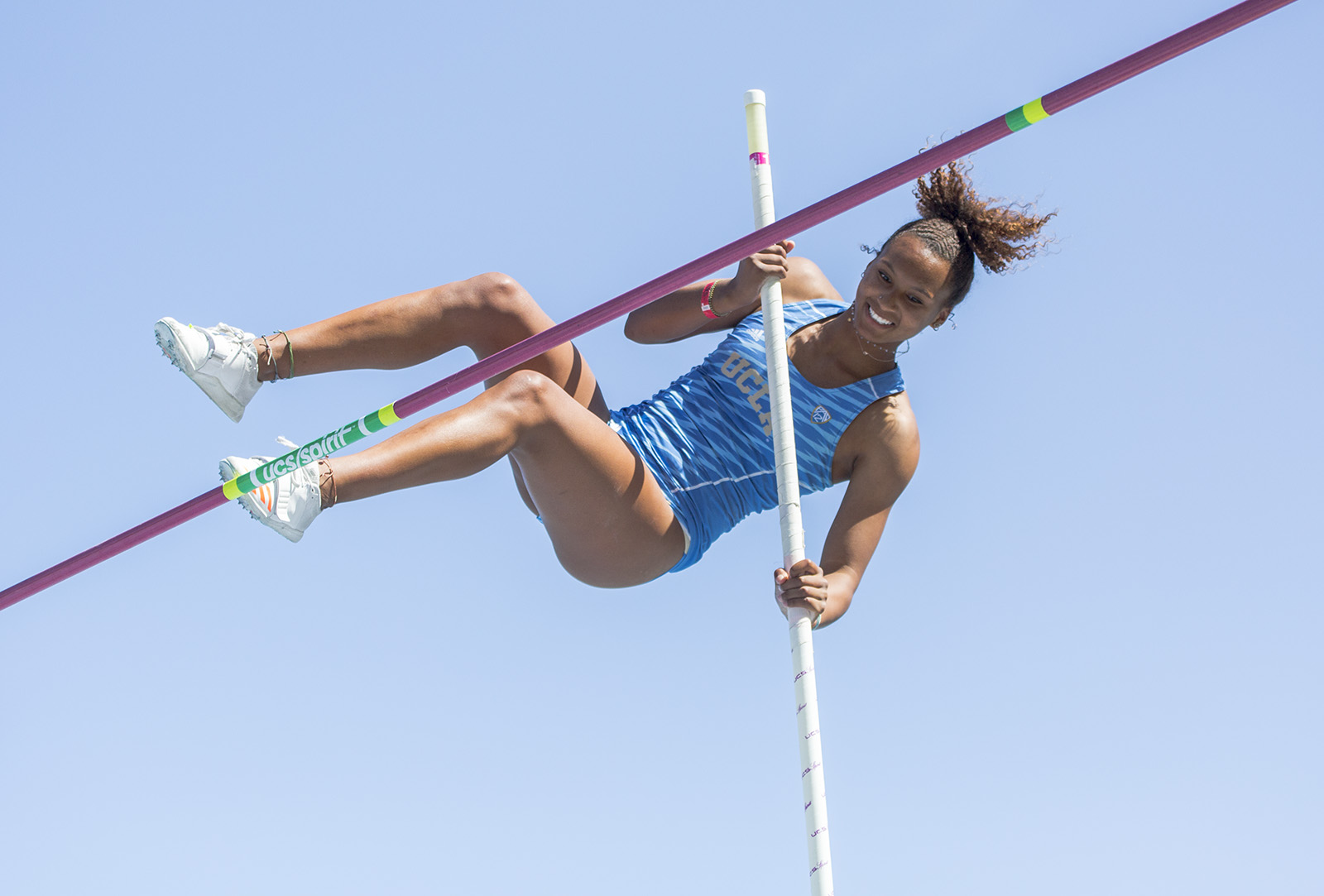 Junior pole vaulter Elleyse Garrett is one of two women’s pole vaulters on UCLA track and field who have made the NCAA Western Regional for the second year in a row. The top 12 move on to the national NCAA meet, and Garrett is entered as the 17th seed. (Keila Mayberry/Daily Bruin staff)

One of the more visible patterns for UCLA track and field of late has been the consistency of its women’s pole vault team.

In every year except 2015, the Bruins have had at least two women’s pole vaulters qualify for the NCAA Division I West Regional.

For the past two seasons, those pole vaulters have been junior Elleyse Garrett and redshirt sophomore Greta Wagner, who this year are seeded 17th and 24th, respectively – the highest seedings for UCLA’s top two women’s pole vaulters in the last three years.

“I think they’re both ready to have one of their best meets of the season,” said volunteer pole vault coach Anthony Curran. “We’ve stopped lifting and we’re just on the high bar and doing a little bit of sprint workouts and vaulting. … Both Greta and Elleyse have been jumping spectacularly in practice, so it just needs to carry over into the meet.”

Heading into last year’s regional, Wagner was coming off a freshman campaign in which she had cleared 13 feet, 8 1/2 inches, good for ninth place on the all-time UCLA pole vault record board.

The mark won her the 15th seed, meaning Wagner entered just three spots behind the cutoff for the national championship meet. She would finish 6 inches short of the 13-6 1/4 that would form the eventual cutoff for nationals. That mark is also her tallest outdoor clearance heading into regionals this year.

That clearance came in one of the Bruins’ very first outdoor meets of the year, however, and Wagner has only come within 6 inches of that score once.

To return to that altitude, she’s moved back one of her strides, she said, and has been vaulting on bigger poles, which is where she’ll get the extra height according to Curran.

Garrett, on the other hand, after making the top 48 last year by no more than half an inch, has surged all the way up to become the 17th seed in this year’s competition.

Her 13-8 1/4 jump on April 1 ranks right behind Wagner’s on the all-time program leaderboard. Since then, she has come within range of that height three times in competition, and has surpassed it in practice.

“She’s had two (personal records) in practice. She jumped about 13-10 in practice about three weeks ago and then on Friday she jumped 13-9 in practice with the bar,” Curran said. “I’ve never seen someone so poised. I give her two years to be as good as the top kids ever at UCLA.”

Two years ago, Garrett was just a walk-on whose first official collegiate clearance was 11-1 3/4, a score more than two feet short of cracking the nation’s top 100.

To improve 2 feet in three years is remarkable, according to Curran. He said she’s his walk-on success story.

“To be here and hopefully making nationals and to be on the top 10 list … I’m still amazed,” Garrett said. “I haven’t done (pole vault) for very long and I feel like I’ve barely tapped on what I can do, so I know there’s a lot more to give. For me it’s all been a crazy process.”

Most recently, Garrett took fourth place at the Pac-12 championships during a dry stretch of an on-and-off rainy weekend. The forecast in Texas is lined up to be in the low- to mid-90s and sunny Thursday, so the only thing the pole vaulters should have to worry about is the wind.

Any amount of wind is cause for a modified approach, though Texas is known for its tailwinds according to Curran. To get used to the feeling of having a wind at their backs, like they will at regionals, Curran and the team had a practice in an area where the winds were really strong.

“One of the biggest things for us is the wind (condition),” Wagner said. “If it’s a really swirling wind then it’s kind of difficult, but other than that we’ve been in pretty much all conditions, so we’re not really afraid to face whatever is coming to us.”