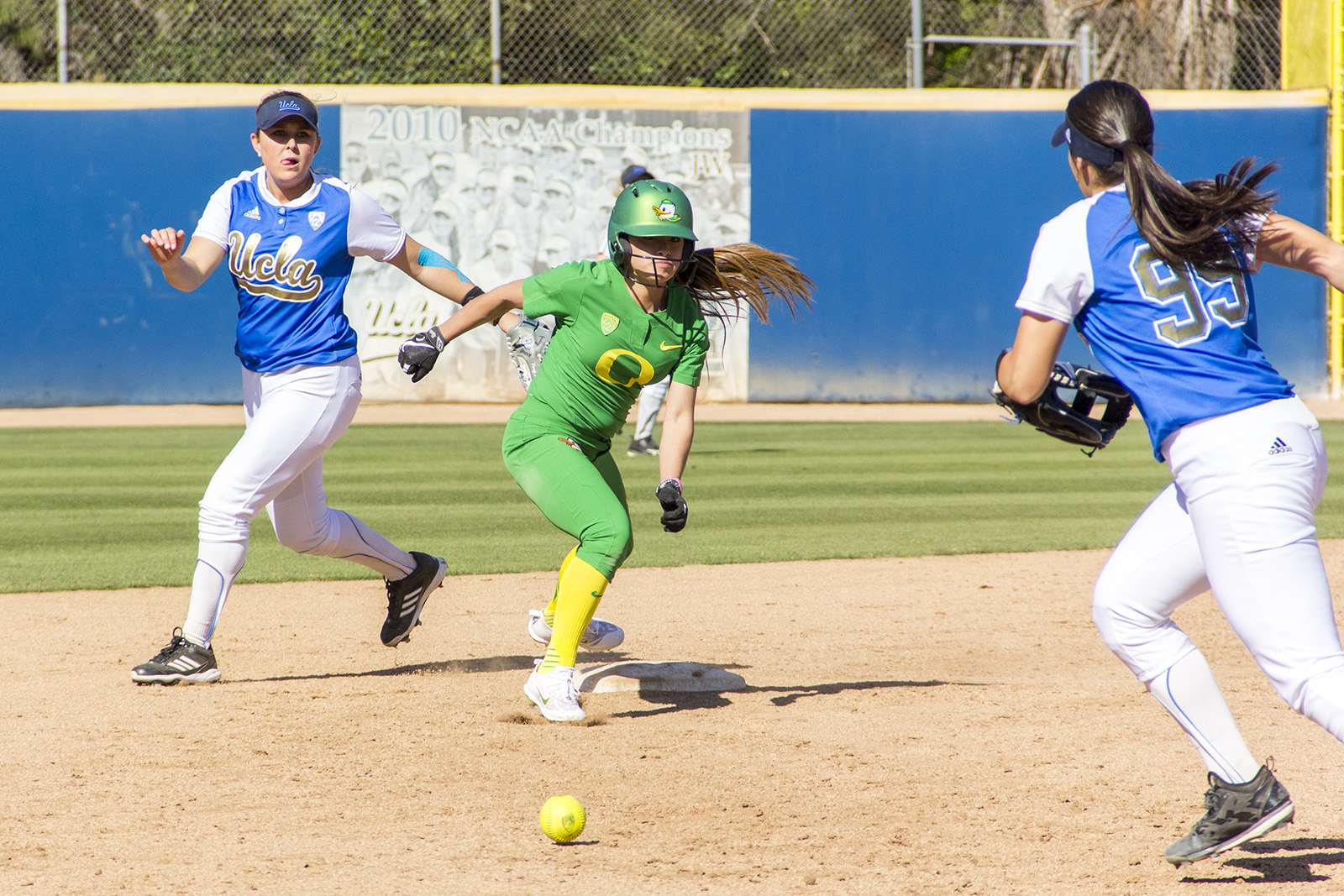 Oregon defeated Wisconsin 9-0 in five innings, clinching a run-rule victory on Sunday. The Ducks will now go on to face the Kentucky Wildcats in the NCAA Softball Super Regionals. (Amy Dixon/Daily Bruin)

After three days, eight teams will move on to match play at the NCAA women’s golf championship.

A winner will emerge Wednesday for the NCAA title.

During the regular season, Arizona State led the way in the No. 1 spot with a rating of 70.56.

Stanford followed close behind at No. 3 and USC at No. 10.

Eight Pac-12 squads made it to the NCAA Softball Regionals and five emerged victorious.

Headed to the Super Regionals are Arizona, Oregon, UCLA, Utah and Washington.

The No. 2 seed Wildcats shut out every opponent they faced – something that no other team in the country has done.

Arizona is in the Super Regionals for the 12th time and will take on No. 15 seed Baylor.

For its 11th Super Regionals, Washington advanced after taking down Michigan 4-2.

Ali Aguilar’s homer early in the game put Washington up 2-1 only for them to relinquish that lead in the bottom of the fourth after Michigan’s Aidan Falk rocked an RBI double to tie the score 2-2.

But the Huskies’ Morganne Flores notched the clincher as she blasted a two-RBI double down the left-field line to put Washington up 4-2 for good.

Washington will get set to take on Utah for its Super Regionals matchup.

Utah was the first Pac-12 team to notch a spot in the Super Regionals after a 14-0 demolition of BYU. That margin of victory was the largest ever in an NCAA contest.

The Utes’ senior Anissa Urtez notched five RBIs on the night and swung 3-for-4 in, possibly, her last home game.

The real Goliath was in the eighth as Utah would put up eight runs to complete the victory.

Oregon took down Wisconsin 9-0 in a five-inning run-rule victory to advance to the NCAA Super Regionals.

Under coach Mike White, Oregon is now 24-0 in NCAA regional games over the past eight seasons.

Oregon will now move on to face No. 14-seeded Kentucky.

On the other end of the spectrum, California had less success. Its season came to an end after an 8-2 loss to Auburn.

The first two innings of play resulted in a deficit the Golden Bears could not overcome as they fell behind 7-0.

By the bottom of the sixth, Cal closed the gap slightly, bringing the score to 7-2 only for Auburn to blast a solo home run in the final frame to finish the game off 8-2.