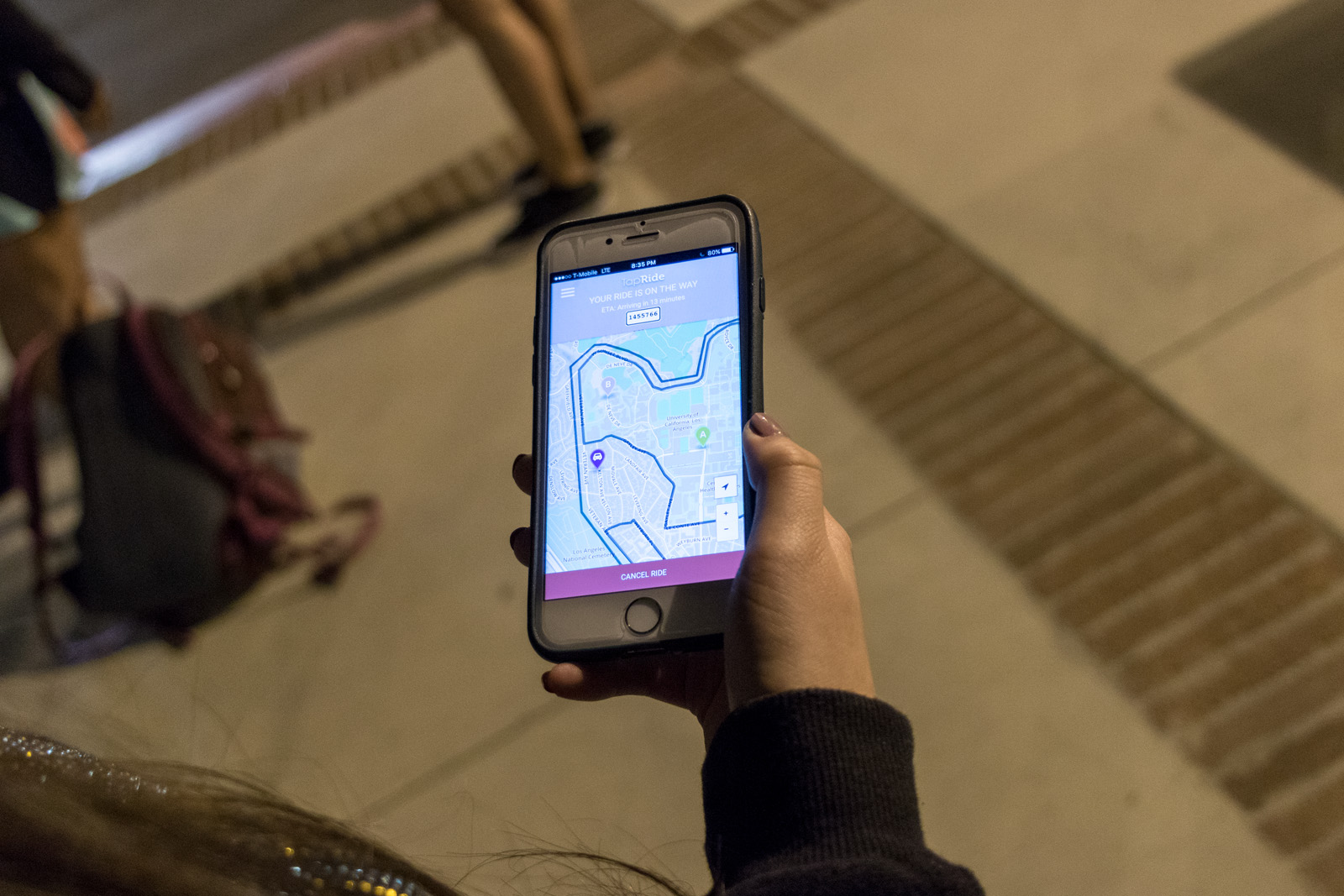 All students will be able to request a ride at designated stops on campus using TapRide, a mobile app introduced to Community Service Officers’ Evening Van Service. (Jacob Preal/Daily Bruin)

Correction: The original version of this article and the accompanying headline incorrectly stated the app's trial period would continue through the summer. In fact, the trial will conclude June 15.

A mobile application that allows students to request rides on campus will continue to go through a trial phase, but expand to allow more students to test the service Monday.

Undergraduate student leaders and UCLA Transportation are expanding the trial period for TapRide, an app that allows users to request rides, similar to ride-sharing apps such as Uber and Lyft, said Zahra Hajee, Undergraduate Students Association Council facilities commissioner. In April, 200 students were selected to beta-test the app, but because UCLA Transportation and USAC wanted to collect more data, they are expanding the beta test to all students, Hajee said.

The data will allow UCLA to see whether the app integrates well with the Community Service Officers’ Evening Van Service, Hajee said.

Students use the evening van service to shuttle between designated stops around campus. With TapRide, community service officers who operate the vans can accept a ride request using mobile devices in their vans and alert students when a van is approaching.

Hajee said students can download the TapRide app and log in using their UCLA student accounts. Students can still call CSO dispatch to request a ride.

Julia Gonzalez, a safety committee member in USAC Facilities Commission, said the app’s interface allows students to track their rides in real time. She added the interface displays each CSO van stop, the routes between each stop and the service’s operation hours.

“Everything is on there,” she said. “It’s nice to just have it all in one consolidated place.”

The trial period will remain open for all students until June 15, and USAC and UCLA Transportation hope to conclude the trial and have a finalized app prepared for students to use in fall 2017, Hajee said.

“We are still working on (the app) over the summer,” she said. “There are not a lot of students then, so these last weeks of spring are important.”

Hajee said UCLA Transportation has been working with TapRide to address issues with the app, including difficulties navigating UCLA’s campus geography. She said TapRide is still not a permanent service and that the expanded beta test will determine whether or not UCLA fully implements the app.

Several students who beta-tested the app said they thought the app was useful but had some technical issues.

Betty Nguyen, a fourth-year biology student who beta-tested the app, said the app’s map makes it difficult to tell which side of the street the vans are on. She also said the van tracking function sometimes freezes, so said she thinks the app should provide a marker that indicates when the van’s location is being updated.

Nguyen added she thinks using the app is easier than calling because she sometimes feels intimidated to call a police dispatcher.

María Martínez, a fourth-year political science student who also beta-tested the app, said she found the app useful because she could request a ride for herself and even indicate how many people she was riding with. She added that sometimes the dispatch line is busy, so it is easier for her to request a ride using the app.

She said the app initially had problems recognizing one-way streets, but added the issue was resolved in later rides.

Martínez also said she was glad to hear that testing for the app would extend to all students because she thinks it would help UCLA Transportation and TapRide work out the service’s current problems, such as the lack of specific address names for each stop on the app’s map.

“The more (students) the better,” she said. “It adds more pressure for them to fix the app.”