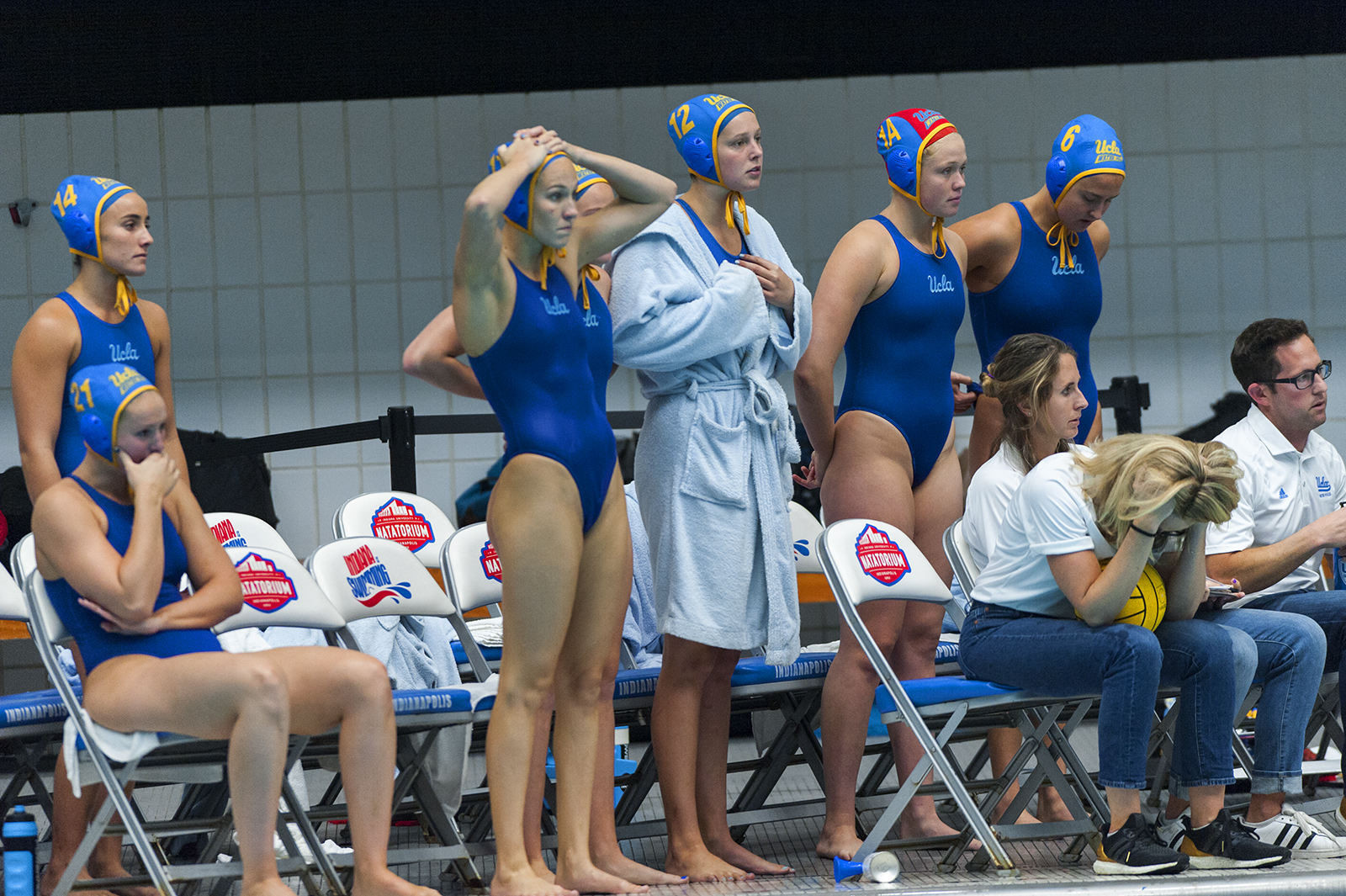 In the last minute of play, No. 2 Stanford stole the ball away from No. 1 UCLA women’s water polo and scored on its next possession. The Bruins could not match the late goal and would fall to the Cardinal in the national championship game. (Amy Dixon/Daily Bruin)

INDIANAPOLIS — Another NCAA women’s water polo final came down to the last minute between UCLA and Stanford, and for the third time in four years, the Cardinal came out on top – narrowly.

No. 1 UCLA (24-2, 6-0 Mountain Pacific Sports Federation) had completed a massive second-half comeback in Sunday’s national championship, and even had a chance to win before eventually falling to No. 2 Stanford (23-3, 5-1) 8-7.

The Bruins had the ball and were fresh off a timeout with 31 seconds left, having just evened the game for the first time 20 seconds earlier.

With a new 35-second shot clock, they had the chance to run the game all the way down and have the last possession.

But cue an intercepted pass, a Stanford timeout and an outside strike from Olympic captain Maggie Steffens, and the Cardinal took an 8-7 lead with nine seconds left, and the win.

And the Bruins were playing from behind from the very beginning.

In a game earlier in the year, they had jumped out to a 3-0 lead over Stanford, but this time it was the Cardinal that struck before UCLA managed to get itself on the board.

Stanford’s Madison Berggren scored on its very first possession and Jordan Raney added another while the Bruins struggled to get anything going on offense for the first four and a half minutes.

Their drives, both weak-side and strong-side, were covered from start to finish, and when they did get their passes into redshirt senior center Alexa Tielmann, a Cardinal defender was a few strokes away to steal the ball.

“In the beginning of the game, we let our emotions get the best of us a little bit,” Brooks said. “That made us a little bit passive, and they capitalized on some opportunities.”

Freshman attacker Maddie Musselman scored the Bruins’ first goal of the game with 3:11 left in the first quarter, and redshirt senior attacker Kodi Hill added a goal in the second quarter to bring the score to 3-2.

Behind Steffens, though, the Cardinal’s offense powered to a 5-2 halftime lead.

On the wing, she drew an exclusion on redshirt senior defender Alys Williams, which led to a power play goal from Raney.

The following possession, sophomore goalie Carlee Kapana blocked Steffens’ initial shot from center and another follow-up before she – while underwater and with UCLA crashing all over her – pushed the ball under Kapana’s arm.

The three-goal deficit UCLA faced at halftime was the most they have trailed to a top-three team since playing then-No. 2 USC in the semifinal of the Barbara Kalbus Invitational in February.

In that game and in the national championship Sunday as well, out of the halftime huddle, the Bruins made a push, though were unsuccessful in the end.

On Sunday, they managed to get three exclusions on offense and limited Stanford to just one goal – which came when UCLA was down a player – in the third quarter, and entered the fourth only down two.

Williams made a quick dart in front of the cage and converted a cross-pool pass on the Bruins’ first possession of the final frame, and they were within one for the first time since the closing minutes of the first quarter.

A few possessions later on defense, however, a miscommunication left Stanford’s Shannon Cleary wide open on the wing, and the easy score for the Cardinal would bring their lead back up to two.

Musselman’s second and third goals of the game – the second one from distance with five seconds left on the shot clock and the third from the left post with 51 seconds left in the game – would bring the match to 7-6, and 7-7, respectively, before the final dramatics sealed another national championship loss for UCLA.

“I’ve played in many national championships over the world and Australia and international stuff,” said freshman utility Bronte Halligan. “But this game was one of the toughest, if not the toughest, I’ve played.”

For Williams, this one stung the most.

It was her’s and the six other seniors’ last game for UCLA, and their chance to cap a near-undefeated season with the most important win of all.

What’s important now, she said, is for her younger teammates to take this loss into next season and simply move forward.

“If I could teach them something, it’s to never give up and it’s not over until it’s over,” Williams said. “We didn’t lose that until the last few seconds.”