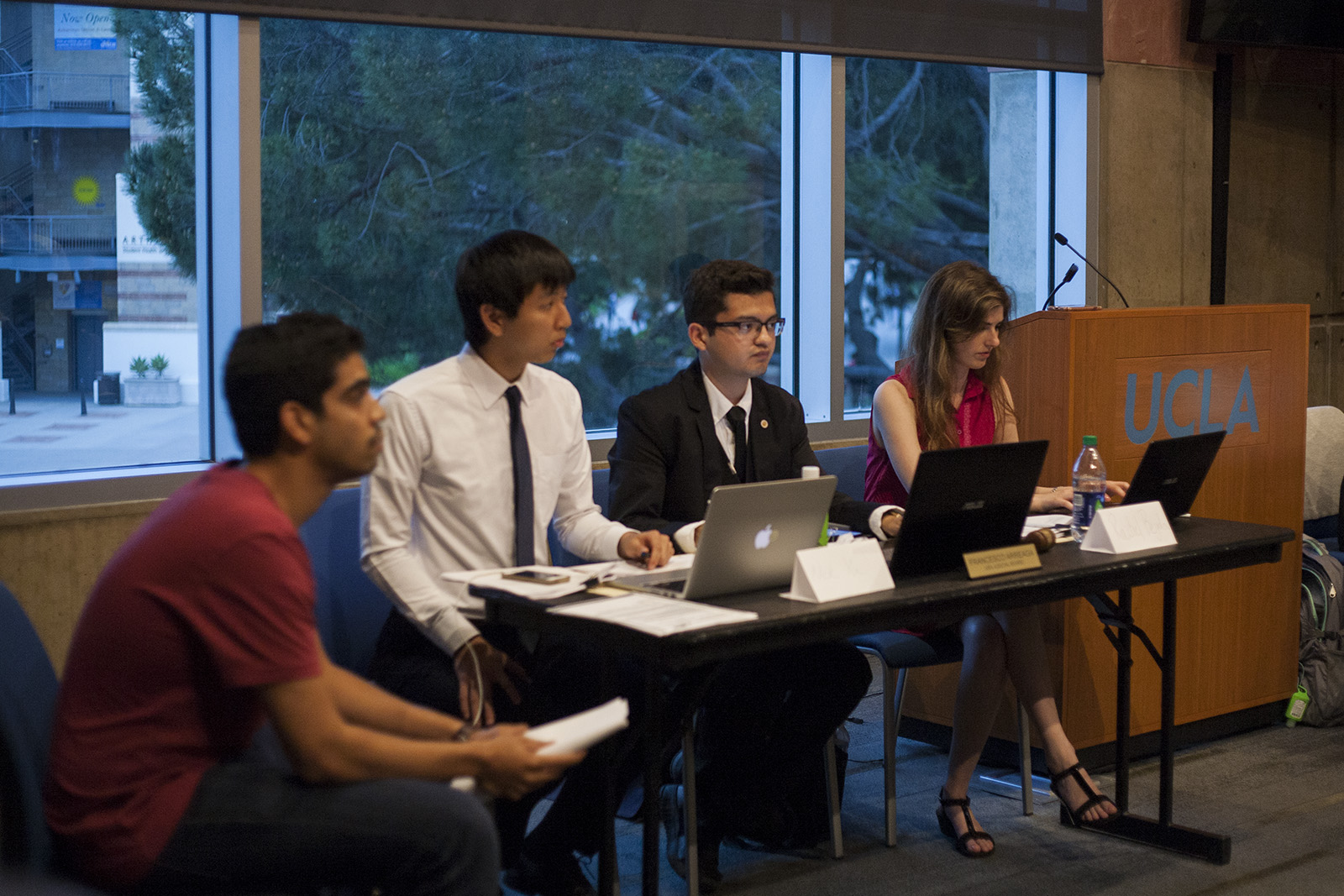 The USAC Judicial Board held a hearing Thursday evening for a petition it accepted the same day. The petitioners asked the board to disqualify all nine Bruins United candidates. (Kristie Hoang/Daily Bruin)

The Undergraduate Students Association Council Judicial Board conducted hearings Thursday on a petition that aims to disqualify the entire Bruins United slate, the board’s first case of the year.

The petitioners alleged the election board violated election code by sanctioning the Bruins United slate too lightly for failing to disclose a sponsorship from the mobile application Barpay. Bruins United did not comply with the sanction and still campaigned Wednesday. The election board issued two more sanctions that the petitioners claimed was also not severe enough, given the slate’s previous violations.

On Thursday afternoon, Alicia Frison, Brad Fingard and Sanjana Nidugondi filed the petition Alicia Frison, et al. v. Election Board. The judicial board accelerated its procedures and began hearings for the petition at 6 p.m. the same day in order for the case to be reviewed before USAC election results are announced Friday.

The election board oversees the USAC election process, and enforces the election code’s regulations. It issues sanctions to deter future violations and repair any damage to the election cycle, in order to ensure an equal playing field for all candidates.

The judicial board serves as the USAC board of appeals, and has the right to determine whether the election board has actually violated the election code.

At the hearing, election board finance director Suman Padhi, represented his board members, the respondents. Third-year philosophy student Jason Hirose represented the petitioners.

Siegel and Rafalian were not present, and later told the Daily Bruin they had not been invited. Rafalian said he believes whoever called him as a witness intended to portray both him and his slate in a negative light. Fingard said the mistake occurred because of miscommunication.

Fingard, a former Bruins United member, spoke about his previous experiences in the slate. He claimed the members have repeatedly engaged in tactics that breached election code to gain votes, such as dorm-storming, or having members of the slate campaign to students on the Hill. Fingard, who is listed on external vice president candidate Chloe Pan’s website, was also formerly part of her campaign team, according to Pan.

Padhi opened the election board’s statements by saying it was not there to defend Bruins United, and only to defend its own actions and compliance with election code. The board said it deliberated on how severely to sanction Bruins United, and maintained that the 24-hour sanction it gave is appropriate based on the extent of the violation and the precedent established this year.

In response to the petitioners’ argument that past Bruins United violations should count toward severity of this year’s sanctions, Padhi said that unless previous offenses affected the current year’s election cycle, they should not be considered again when deciding subsequent sanctions.

Fingard also shared screenshots of GroupMe messages involving current and former Bruins United members, which he said showed intent to violate the election code. The election board members responded that it would be difficult to use the GroupMe messages as a source of intent when deciding on the severity of the sanction because they had never seen them before.

During closing statements, Hirose said the petitioners do not think sanctions are effective as a penalty, and the only solution would be to disqualify the entire slate.

The election board countered by saying they still believed their sanction was reasonable based on the violation’s impact on the election.

“It is not the election board’s duty to be an activist organization,” Padhi said. “The reason we did not disqualify Bruins United is because it would have been a disproportionate remedy for a $654 infringement.”

He added he thinks the 24-hour sanction was harsh enough, and pointed to the Social Justice Referendum’s sanction from 2016, which he said was more severe.

Chief Justice Rachel Beyda adjourned the hearing at about 8 p.m.

Beyda said the judicial board is still deliberating and she expects to release a decision around Friday morning.

Election results will be announced at 5 p.m. Friday in Meyerhoff Park.