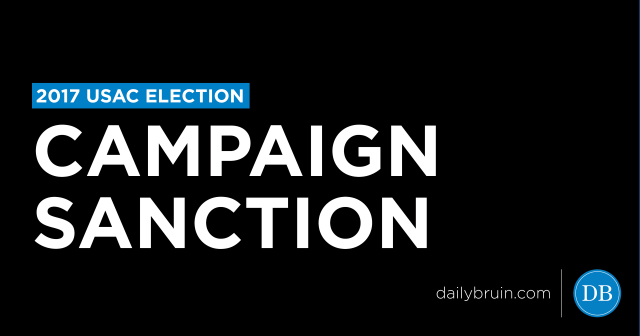 Candidates from the Bruins United slate were banned from campaigning on campus and online all day Wednesday for failing to disclose a sponsorship from a mobile application.

An anonymous complaint to the Undergraduate Students Association Council Election Board claimed Bruins United failed to accurately report sponsorship that constitute donations to the slate. The report was filed after an email sent by Barpay earlier in the week encouraged recipients to “enjoy … Bruins United Inspired Specials” at Rocco’s Tavern, a bar in Westwood.

The election board found that the slate failed to account for its partnership with Barpay in its expense report, though it did not violate the restriction on campaigning within eating areas because it concerns on-campus campaigning. The board issued the 24-hour sanction late Tuesday evening, which will end at 7 a.m. Thursday.

Barpay, a mobile application, allows users to order food and beverages from their mobile device, eliminating a physical check, according to its website.

The election board investigation listed a number of specific services that went unaddressed in the slate’s expense report, including the aggregate discount value of all drink or food items sold with Barpay. The slate also did not account for the use of Bruins United candidate names on drinks and food at Rocco’s Tavern.

In addition to the 24-hour campaigning ban, Bruins United must submit an updated Expense Account and Source of Funding Form by 7 a.m. Thursday reflecting all services provided by the Barpay company. If the slate fails to do so, the election board will continue to prohibit campaigning until the slate submits the necessary forms.

Voting on MyUCLA closes Friday at 3 p.m., and results will be announced at 5 p.m. in Meyerhoff Park.