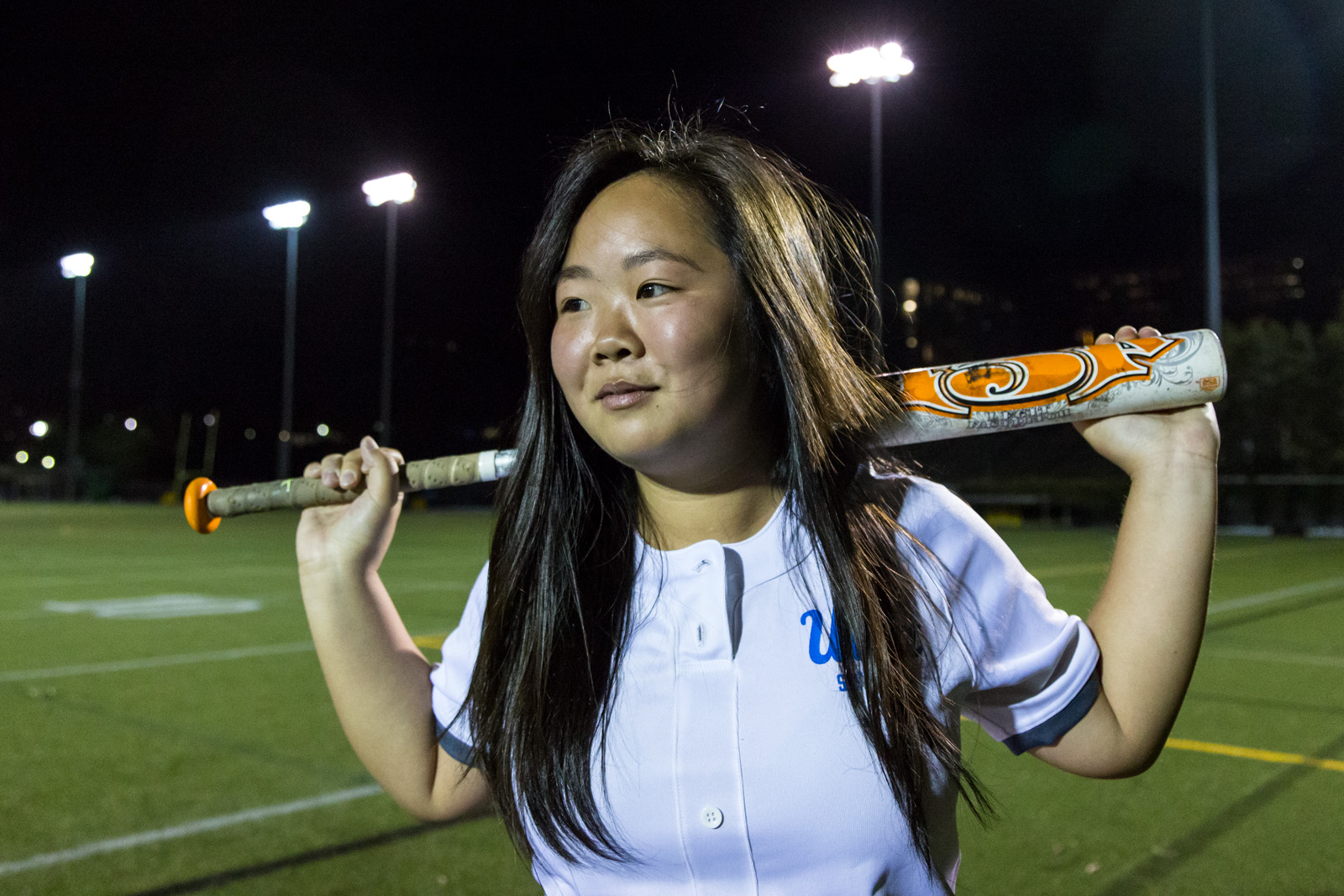 Junior right fielder Flo Lee was only a freshman when UCLA club softball restarted, but is now a co-president. Lee is a linchpin on and off the field for the Bruins, facilitating paperwork and bringing the team together for outings. (Owen Emerson/Daily Bruin senior staff)

Three years ago, there was no club softball team at UCLA.

But a group of students took it upon themselves to restart and build up a program that disbanded years ago.

And now, UCLA club softball boasts a 20-player roster, a 15-game schedule across Southern California and Arizona, and practices nearly all year round.

Despite its growth, the program is still run entirely by students.

Without the luxuries of Division I athletics, many of the veteran athletes take on dual roles, acting as players as well as coaches and administrators.

Those who do take on leadership positions must deal with not only the day-to-day grind of academics and playing sports at a high level, but must also organize and coordinate every aspect of the team.

“It was really hard; our first year didn’t go that well,” Hval said. “We didn’t really have anyone to tell us, really anything, of what we had to do. … It was hard to get people and spread the word to the campus that we (were) starting a team.”

Hval has been with the team since it restarted three years ago and is the current financial officer.

Being in charge of the club’s financial accounts requires Hval to handle purchasing equipment, hiring umpires and acquiring field space.

And even now, the team shares only a bucket of balls, a smattering of bats and a shared collection of helmets – a fraction compared to the wealthier club teams. However, they make it work.

Junior right fielder Flo Lee doubles up as the team’s co-president. Lee handles much of the paperwork and any communication the team requires with the UCLA club sports office and the greater club softball league.

But despite taking on all this extra work, Lee says it’s all worth it.

“The most rewarding part is when we actually get to go to the games and play,” Lee said. “That’s when all the hard work that goes into getting all the paperwork done or practices and conditioning really just comes together and you get to see what you’ve built.”

The experience of going to college can be a big change for anyone, but freshman shortstop Destiny Ramirez found that joining the club softball team really helped to smooth the transition.

“Coming to UCLA, I didn’t know anyone,” Ramirez said. “I don’t have any family in the area and I was the only person from my (high school) class to come here so I was definitely looking for that niche in college where I could find a little home. I was definitely timid at first but now, I feel like they’re definitely more than a second family to me.”

Not only do the athletes see each other on the field, but they also go out to batting cages, get dinner and host socials. And according to Ramirez, it’s this culmination of little things that makes those bonds tighter.

In her first season taking on a heavy leadership role, Lee said she felt as though it was her duty to create a friendly environment for not only the new and younger athletes but for the team as a whole.

Senior center fielder Ivana Petergacova has played on the team for the past two seasons. Prior to that, however, Petergacova played at Santa Monica College and dabbled in softball back in her native Slovakia.

Petergacova found the club softball team to be the perfect fit for her as an athlete and a transfer student.

“I just really wanted to play softball,” Petergacova said. “And it was so nice to have people to know shortly after you arrive as a transfer student.”

The compelling combination of competitive play and a tight-knit community appealed to many of its players, as the club softball program has blossomed from 13 players in its first year to 20 currently on the roster, and a thorough tryout process.

And to many of those within the club softball program, it has become and will continue to be one of the most valuable aspects of their respective college experiences.

“It’s everything that I hoped it would be. We spend time together, not just on the field, but we’ll have socials, and we’ll get food,” Ramirez said. “It’s just really great to have this group of girls.”