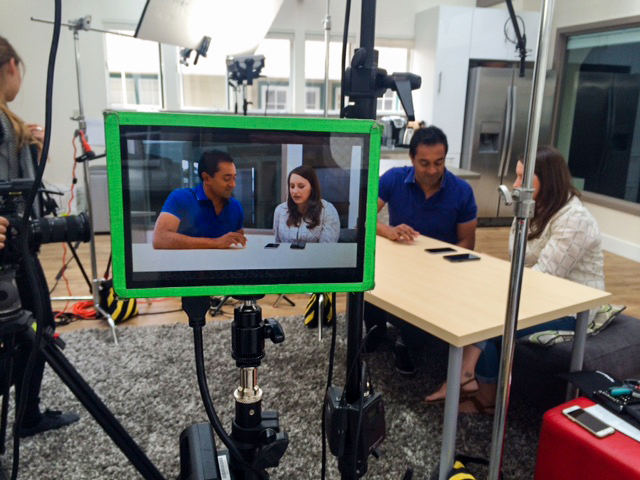 Muttulingam Sanjayan, a visiting researcher and conservation scientist, films a video for the latest Climate Lab series. The first episode, released last week on Vox, was seen by nearly half a million people. (UCLA Laboratory for Environmental Narrative Strategies)

A UCLA researcher is investigating how to best frame climate change research in a way that encourages the public to follow environmentally friendly practices.

Magali Delmas, a professor of management at the UCLA Institute of the Environment and Sustainability and the Anderson School of Management, recently showcased her research in an episode of the video series “Climate Lab” published by Vox news. The University of California partnered with Vox to create the six-episode long series to help fulfill the UC’s 2013 initiative to render the campuses carbon neutral by 2025.

In the first 10-minute long video, seen by nearly half a million people since it was released a little more than a week ago, Delmas spoke about whether it is better to stress the monetary consequences of environmentally unfriendly practices or the health and environmental detriments when encouraging people to save energy.

As part of her study, Delmas equipped 120 apartment buildings in the UCLA University Village with technology that would monitor real-time energy usage per appliance to test her prediction that people would most readily change their energy consumption if presented with the potential monetary gains.

For the first group, Delmas sent weekly emails detailing how much money they could save if they improved their energy efficiency. For the second, she sent emails that described the environmental and health consequences of their energy consumption. A control group received no emails.

Victor Pinto, a graduate student in atmospheric and oceanic sciences, was featured in the video as a participant in Delmas’ study. In the video, Pinto discusses how monitoring his energy consumption led him to discover that his old refrigerator was the culprit for much of his energy usage.

However, he said while he thinks exposure to the health-related messages could be an effective way for some to change their behavior, he found it to be a somewhat accusatory approach.

Pinto, who was placed in the group that received messages about energy use’s effects on health and the environment, said he received weekly emails about how many asthma deaths corresponded to his use of energy and the equivalent carbon emissions.

He added he was raised in Chile where cheaper energy was harder to acquire, leading him to become more conscious of his energy consumption. Because he said he felt like he was already minimizing his energy usage, the guilt-tripping messages frustrated him. However, he said he thinks the average American would nonetheless benefit.

“For a person that typically does not care (about their energy usage), such a strong message would at least get them to think about (the consequences),” he said.

[Related: University of California to partner with Mexico on energy efficiency research]

Jon Christensen, an adjunct assistant professor at the Institute of the Environment and Sustainability, said he thinks the video series is an important way to introduce a shift in climate change communication strategies where past efforts have failed.

He added he thinks one of the past issues with communicating climate change was that it appeared preachy, or overly pessimistic. He said the video focuses more on solutions, offering ordinary people ways they can make small-scale changes that have large-scale impacts.

Subsequent episodes will focus on solutions to climate change other than changing one’s energy usage habits, including ways to reuse and recycle materials and reduce food waste.