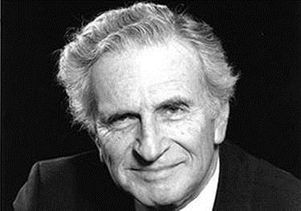 Arnold Scheibel was a professor of neurobiology and psychiatry in the David Geffen School of Medicine and popular among his students because of his unique and inclusive ways of teaching. (UCLA Newsroom)

Elaborate drawings of different parts of the brain covered the chalkboard of Arnold “Arne” Scheibel’s graduate neuroanatomy courses. For more than 50 years, Scheibel shared with students his love for both art and science through his classes.

Scheibel, who was an emeritus distinguished professor of neurobiology and psychiatry at the David Geffen School of Medicine and a former director of the UCLA Brain Research Institute, died on April 3. He was 94.

The passion Scheibel showed in his lectures inspired many students to be interested in neuroanatomy and pursue their own goals in the sciences.

Scheibel was born in New York City in 1923 and received his doctorate in medicine from Columbia College of Physicians and Surgeons in 1946. He came to UCLA as a faculty member of the anatomy and psychiatry departments in 1955 and remained at the university for 58 years.

Prior to his time at UCLA, Scheibel served as an Army medical officer. He also received a John Simon Guggenheim Memorial Foundation fellowship, which led him to spend 15 months at the University of Pisa and the University of Oslo.

He was popular among his students because of his unique and inclusive ways of teaching, said Stephen Wilson, Scheibel’s former student and an assistant professor at the Vanderbilt University School of Medicine.

“(Scheibel) would go through each structure of the brain, and make it so interesting and put it into context … it just came to life,” Wilson said. “It was the most work I had to do for a class, (but) it was not boring at all.”

Meredith Braskie, Scheibel’s former student and an assistant professor of research neurology professor at the University of Southern California, said his enthusiasm for the topic was so contagious that many students enjoyed his class even though it was known as one of the most difficult in the department.

Wilson added he thinks students respected Scheibel because of his personal demeanor.

“He (was) also such a gentleman,” Wilson said. “Really kind, from another age, very dignified, always wore a coat (and) spoke like a TV presenter from the ’50s.”

The students’ textbook The Human Brain Coloring Book, which Scheibel co-wrote with his wife and fellow neurologist Marian Diamond, exemplified his love for both art and science, Wilson said. It also was a product of Scheibel’s continual efforts to ensure the topics he was teaching were accessible to his students.

Scheibel would ask his students to color in the brain diagrams in the book to make it easier for them to memorize. Then, in lecture, he would discuss each part students colored and put the images into context.

“I still have The Human Brain Coloring Book and my notes from the class and refer to them still,” Braskie said.

Karen Emmorey, Scheibel’s former student and a distinguished professor of speech, language and hearing sciences at San Diego State University, said she took his neuroanatomy class even though it was outside of her field and remembers him being an inclusive and sensitive professor to students from all backgrounds.

“I remember (for) oral exams, he asked more linguistic questions,” Emmorey added. “He would go beyond and engage in what students were interested in.”

Scheibel would also make students feel more comfortable by telling personal anecdotes, both related and unrelated to the topics that he was teaching, Wilson said. When Scheibel got married, Wilson said he remembers Scheibel being excited and telling the class about it.

Braskie added Scheibel was always modest about his work despite his popularity with students and prestige in his field. She added that he was so humble, it took her a while to realize that whenever he said “we found,” he was referring to himself and his research team rather than the general neurology community.

His insatiable curiosity on a diverse range of topics and his interests in what his students wanted to pursue were other factors that made him an influential professor, Emmorey said.

“The idea of being passionate is one thing I got from him,” Emmorey added. “It was really clear how interested he was in neuroanatomy. What we were learning, what we didn’t know.”