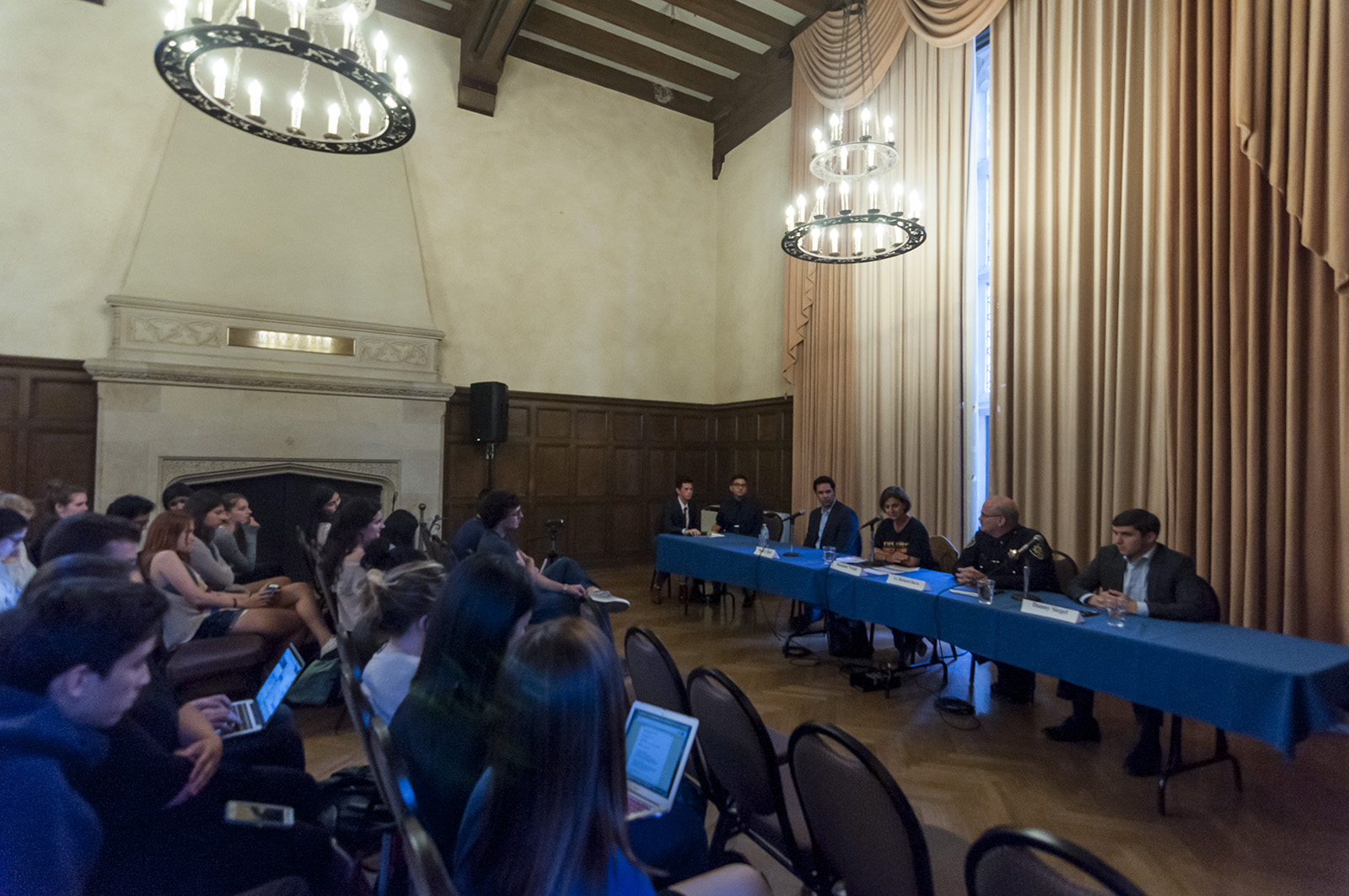 Activists and experts shared their opinions about gun control and how students can protect themselves against gun violence on campus at an event Wednesday evening.

Four speakers discussed their ideas for and against gun control at a panel called “Guns and Our Community.” The Undergraduate Students Association Council external vice president’s office held the event at the Kerckhoff Grand Salon to commemorate the campus shooting which occurred about one year ago.

The panelists spoke to about 20 people about their experience working in areas related to gun violence, measures made to counteract it and their thoughts about gun regulations.

Some University of California campuses have taken action to prevent gun violence at their schools since the murder-suicide, said Gavin Jackson, second-year political science and history student, event organizer and student advocate at the USAC EVP office.

UC Davis, for instance, launched the California Firearm Violence Research Center last summer to study how the use of firearms influences public health and safety.

Jackson said the USAC EVP office’s final goal is to pressure the school to implement more concrete measures to increase campus safety, such as educating students about self-protection.

UCPD Lt. Richard Davis, a speaker at the panel, said UCPD was well-trained for campus emergencies such as last year’s shooting but it is also crucial to give faculty and students proper training as well.

“After the shooting I read from Daily Bruin that some professors told students to cross police lines to go to class,” Davis said. “It is just not the way how this should work.”

Suzanne Verge, panelist and the president of the LA chapter of the Brady Campaign to Prevent Gun Violence, said she hopes to engage more young people, especially students, in fighting against gun violence.

She gave the example of a USC student who launched a website displaying the life stories of student victims of gun violence to advocate for gun restriction.

“It’s unfortunate that we have enough young people to feature on this website,” Verge said. “But what this student does is powerful and a great way to engage more people of your age.”

Daniel Reid, a panelist and attorney for the National Rifle Association, gave an opposing view to gun regulations. He said restricting personal gun ownership is not necessarily the best way to increase social safety.

The increasing gun violence all over the country has aroused people’s attention on different levels, Reid said. The federal government, for instance, has passed more legislation on firearm usage in the past decade.

“It is an interesting dynamic that when something bad happens, the answer is always to have more laws,” Reid said.

Many newly passed laws are actually not well-enforced and their positive impacts are limited, Reid said. For example, people who legally purchase guns and give them to others who are not allowed to own guns are often unpunished.

California has passed eight firearm-related legislations last year, Verge said. From 1993 to 2014, California reduced its firearm mortality rate by 57 percent, a refutation rate that is more than twice the United States’ as a whole, she added.

“We are showing strong gun laws do work,” Verge said.

Davis said that he thinks enforcement of these laws on the individual level is as crucial as lawmaking.

“Guns themselves don’t do anything,” he added. “It is the people who use them that make them safer or more dangerous.”

Alley Madison, a second-year English student who attended the event, said she hopes there can be more events like this to inform students about gun violence and self-protection on campus.

“Last year’s shooting made many students wake up to the fact that (gun use on campus) is a serious issue,” Madison said. “But it didn’t have a lasting impact on our student body.”

Andrew Yamasaki, a second-year electrical engineering student, said he was glad to hear the arguments from both proponents and opponents of gun restriction from the panel.

He added students tend to disagree in how to use guns in real life even though most students share the same goal of improving security on campus.

“Of course there are always differences in opinion,” Yamasaki said. “But as long as we are respectful for each other, we can still reach a constructive conclusion.”