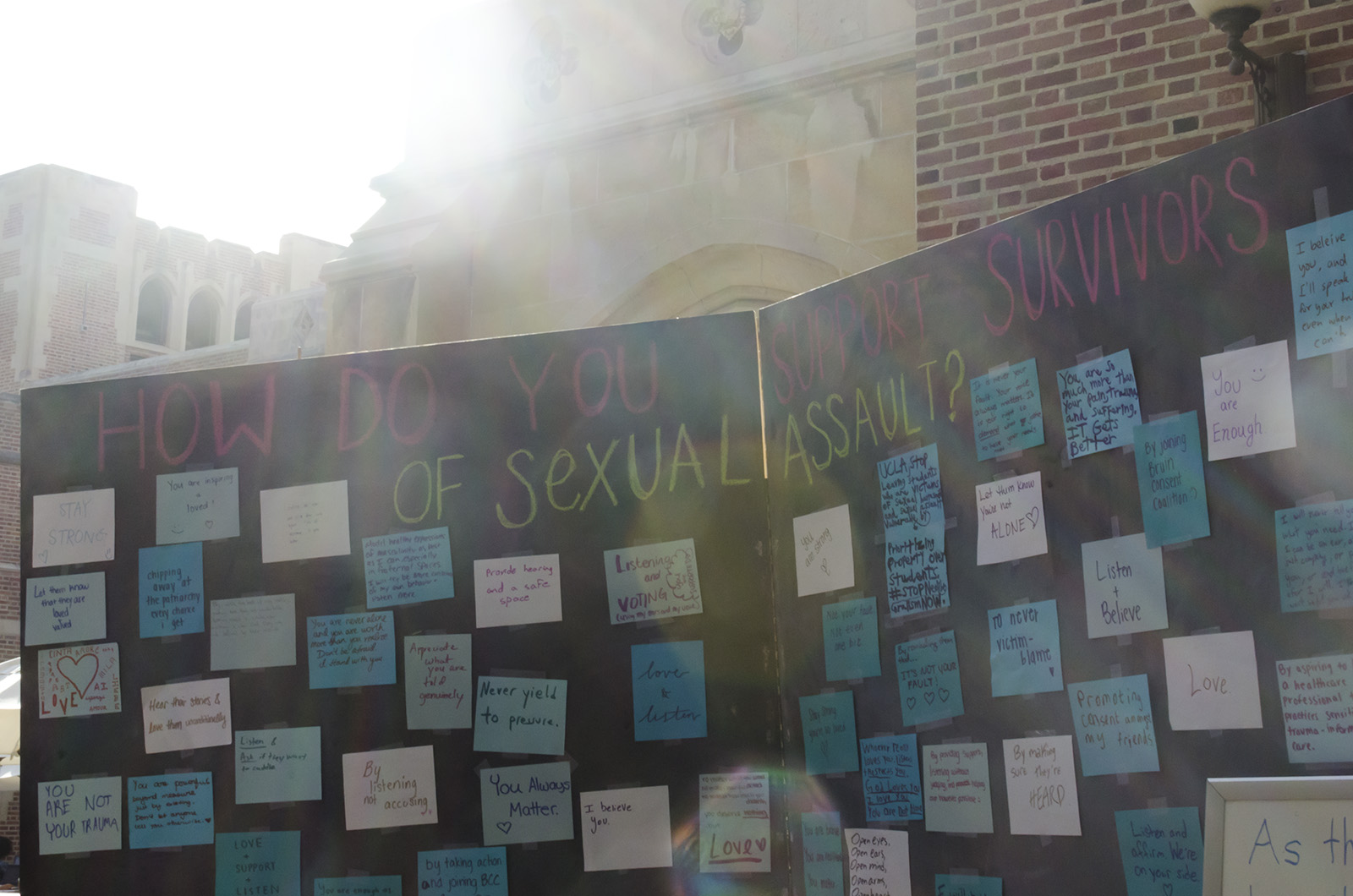 “Til it happens to you, you won’t know how I feel.”

February 28, 2016: Lady Gaga performed her song “Til it Happens to You” at the 88th annual Academy Awards and brought 50 sexual assault survivors on stage in a very powerful performance. Among them was a UCLA student by the name of Becky Stepp.

Every 98 seconds, someone in the U.S. is sexually assaulted. Many of these assaults occur on college campuses throughout the nation, and UCLA is no exception.

Like many other universities, UCLA has taken to educating students and faculty in the hopes of preventing sexual assault and harassment on campus. The school has chosen to teach students about sexual assault prevention through an online training module.

But despite its efforts over the past few years, UCLA’s prevention and education program is not enough to effectively address this issue. The university can more effectively help prevent sexual assault by requiring students to attend yearly interactive sexual assault prevention meetings, where they can hear about this matter through the voice of survivors willing to share their stories. Multiple meetings throughout the year could be offered to accommodate the entire student body.

UCLA’s current sexual education system solely requires having incoming students complete an online module that educates them about sexual assault and harassment. Every incoming student must complete this module designed by Campus Clarity, which covers broad topics such as sex in college, partying, healthy relationships and sexual violence.

But sexual assault is a very serious and sensitive topic that needs to be tackled through other means. And despite the probable benefits of online learning, studies have proven that students prefer the classroom learning environment. What’s more, UCLA students have to take this training program while still on vacation, when they are not truly connected to campus issues yet.

Many students are skeptical about this online module. Sophia Arim is a fourth-year history student and co-director of the Bruin Consent Coalition, a student organization that aims to support survivors and educate the UCLA community. Arim said she would like prevention to be more interactive, as she thinks many students probably click through the online module without absorbing the information.

Melissa Melpignano, a cultural performance graduate student and member of Bruins Against Sexual Harassment, a student organization that fights sexual harassment on campus, also said the online module training is not enough to effectively tackle the issue of sexual assault on campus. Melpignano insisted on the importance of showing the variety of potential perpetrators, such as professors, since some sexual assault cases involve faculty members.

It’s clear that UCLA must improve the sexual assault prevention program it has on campus. And it must do so through mandatory annual interactive sessions, where students must directly engage with sexual assault advocates and student organization like the Bruin Consent Coalition and Bruins Against Sexual Harrasmment. These prevention programs would cover similar topics as the ones covered in the online modules, but through a more direct way allowing students to relate to survivors’ testimonies.

The yearly meetings would replace the online training module and allow students to face the raw truth of what sexual assault really is for survivors. These more interactive meetings would better allow students to understand the trauma behind these terrible acts, and could consequently help students make the right decision when facing these sensitive situations. UCLA students would need to swipe their BruinCards at the end of the mandatory meeting to allow administration to keep track of students’ completion of the program. Consequently, a hold could be placed on students’ accounts if they do not attend these meetings.

Stepp, a third-year nursing student, agrees. She said she believes UCLA is not doing its best when it comes to sexual assault. She added the current online training module offered by UCLA is informative, but she questions how many people really care about it when it can often feel like just another homework assignment.

While Stepp acknowledged it can be hard for survivors to tell their stories, she said she believes it is the only way to effectively fight this too-often censored issue. Survivors’ insights would be a much more effective way of preventing and educating about sexual assault than a clickable online module. Stepp added she would agree to tell her story if people could gain from it.

It may be hard to set up these interactive sessions every year for all students. However, the importance of the problem should push UCLA to overcome these concerns. UCLA has many large lecture halls that can definitely accommodate hundreds of students at a time. Also, while it can be extremely hard for survivors to share their stories, many of them, like Stepp, are willing to talk about their experiences to help educate people around them. And these stories should be shared – with permission, of course – as they can prevent other students from being assaulted.

And regardless of its efforts of late, the issue of sexual assault on campus is still relevant. UCLA currently counts 25 cases of sexual assault between 2013 and 2016 and has mishandled the sexual assault allegations against one of its tenured professors. These types of situations show a clear lack of rigor at UCLA. Sexual assault is an important crime in the state of California.

College campuses should be safe sanctuaries of knowledge, and we must all fight against these abuses. This is not only the survivors’ fight – it is also ours.