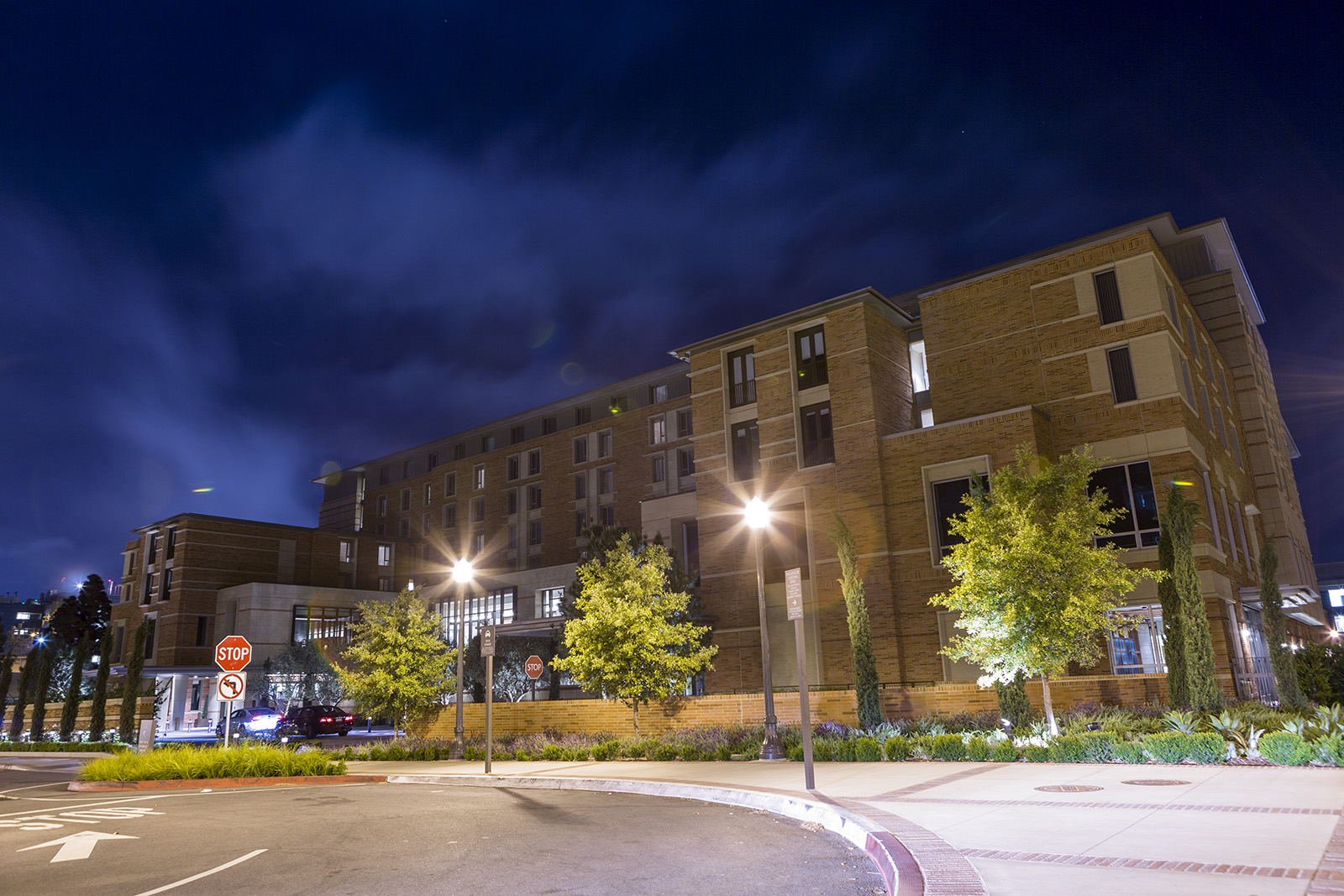 The Meyer and Renee Luskin Conference Center, which opened last fall, is projected to lose nearly $4 million during its first fiscal year, which ends this June. (Jintak Han/Assistant Photo editor)

The Meyer and Renee Luskin Conference Center is projected to lose $3.7 million in its first year of operation.

The center had about 44 percent of its space booked in the first half of its fiscal year, which ended in December, said Peter Angelis, assistant vice chancellor of Housing and Hospitality Services. The low occupancy rate contributed to the center’s net loss, Angelis added.

Angelis said the center experienced a low occupancy rate because it was only able to host conferences beginning in September, even though its fiscal year began last June. He added the occupancy rate increased to 70 percent in the second half of the fiscal year.

It has hosted 219 conferences since it opened last fall and more than 20,000 guests have stayed in the center’s rooms, said Les Utley, the center’s general manager. He added 76 conferences and 57 meetings are booked for the rest of the fiscal year.

The center will not make a profit because it must service the $112 million loan that funded construction, Angelis said. He said without the $5 million necessary to service the loan, the center would actually report a $1.5 million positive net revenue.

Angelis added the center’s slow start is normal for new hotels, and UCLA Hospitality plans to make up for this year’s loss by taking financial reserves from its other venues, such as the UCLA Guest House and Lake Arrowhead Conference Center.

Angelis said it was difficult to persuade organizations to book conferences at the center before construction ended because the organizations typically make bookings years in advance.

“When you open a new hotel, you don’t have a finished building that organizations can see before booking a conference,” he said.

However, Utley said many academic conferences have now been coming to the Luskin Conference Center, because UCLA faculty and students who are part of national organizations recommend the center as a potential site.

“UCLA faculty and students are part of a lot of trade associations, like (medical associations), and they play a big part in working with our sales team to get conferences here,” he added.

Thus far, about 60 percent of booked hotel rooms were booked by people attending conferences, with 40 percent of those conferences being UCLA-related, Angelis said. He added the rest of the booked rooms were for individual purposes, such as parents visiting campus or faculty visiting from other universities.

Angelis said the center performed 10 percent above comparable private sector hotels in third-party customer satisfaction surveys. He added about 96 percent of respondents have said they were satisfied with their stay.

Several organizations that hosted conferences and events at the Luskin Conference Center said the center met their needs.

Amy Junge, a consultant at Education Evolving, which held the Teacher-Powered Schools National Conference in January, said she thinks the center was well-designed to accommodate large groups.

Cary Gordon, who helped organize Code4Lib, a coding conference for libraries and archives, said the Luskin Conference Center was able to meet their large technological needs.

“Since we were doing coding, we brought a lot of technology and used a lot of devices, but the venue was able to accommodate all that and everything worked well,” he said.

Gordon said it was originally difficult to pay the Luskin Conference Center’s cost.

“We don’t really have a formal budget and we really had to scramble to make the payments,” he said. “But we’ve been doing this conference for 10 years and I have to say (Luskin) had some of the best food and facilities we’ve ever had.”

Brandon Baker, executive director of development for the Henry Samueli School of Engineering and Applied Science, said he thinks the center fulfilled space-related needs and the school saved a lot of money by shifting its events there.

“It always used to be a fight for space, but Luskin allowed us to bring events closer to South Campus and to the Engineering School,” he said.

Baker added he thought the center’s accommodations, such as its restaurant Plateia, were nice places to have meetings with donors and other sponsors.

The Luskin Conference Center projects a 61 percent occupancy for the fiscal year as a whole, Angelis said. He added the center hopes to break even in profits next year.

“We have to build up our business the old-fashioned way, through word-of-mouth, and keep spreading the word,” he said.