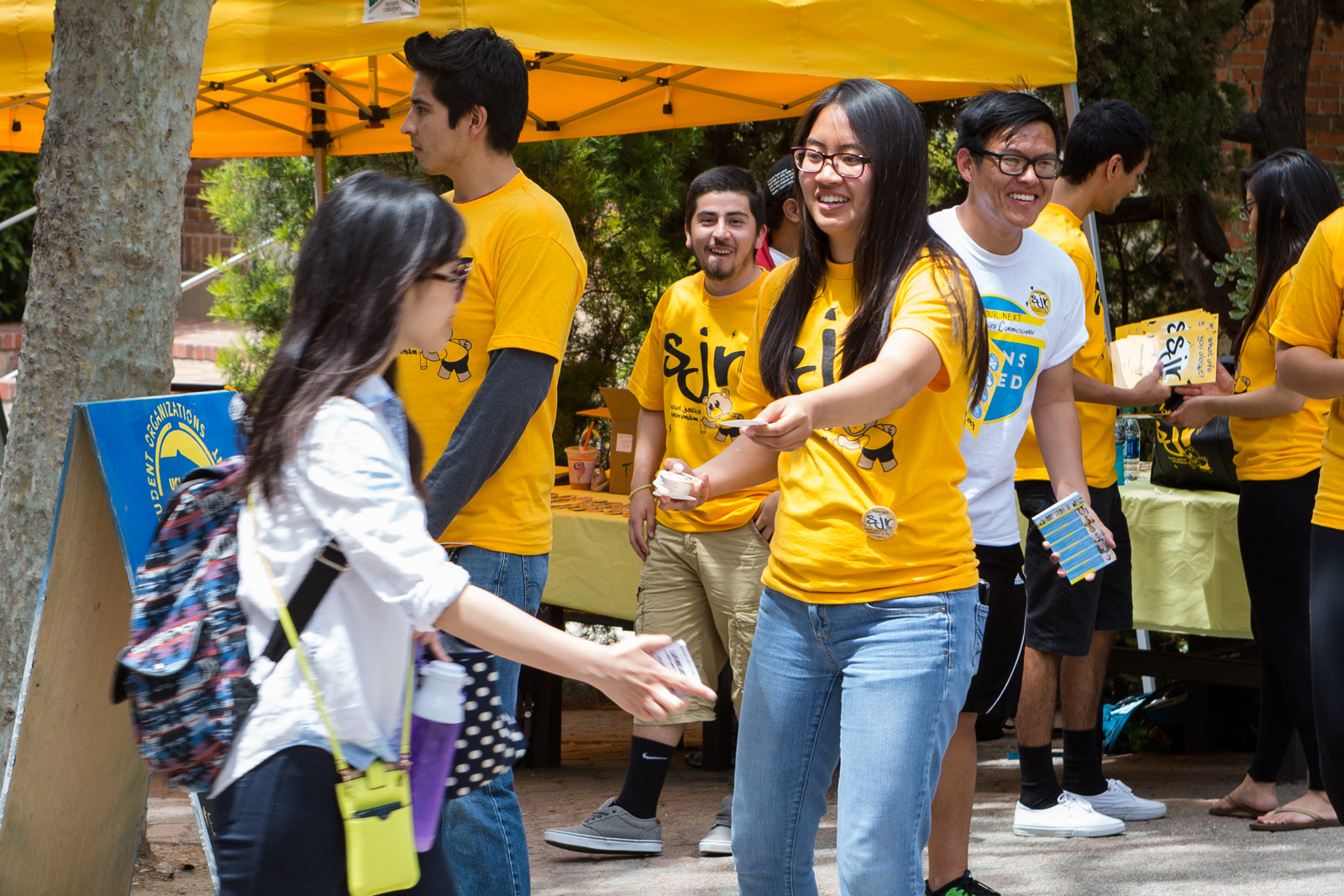 The sun recedes on the aging walls of Kerckhoff Hall. Bruin Walk’s bricks glow an orangish hue. Flyers blow across Bruin Plaza, dancing in the wind and littering the walkway. Oddly cheerful headshots on signboards smile back at students making their way down Election Walk. A horde of students in matching T-shirts carry leftover flyers and retire for the day.

The campus breathes a sigh of relief as yet another day of campaigning ends.

This is UCLA’s inevitable fate. In T-minus 13 days, the Undergraduate Students Association Council’s campaign period officially begins, and the annual overhyped hubbub on Bruin Walk and social media will ensue.

Of course, it wouldn’t be election season without sanctions. In fact, this year has already gotten off to a strong start: Three of this year’s candidates violated the social media campaign rules when an unassuming supporter tagged them in a Facebook post two weeks before online campaigning is permitted. The punishment: The three candidates are prohibited from social media campaigning April 18 for a whopping 30 minutes.

Admittedly, this is a minor transgression, but it forebodes a troubling trend. USAC campaigning has become more and more aggressive by the years, and rightfully so, given the intense competition that comes with contested races. Violations are a byproduct of this more-aggressive campaign style, but lately we’ve seen offenses that sometimes show blatant disregard for election rules.

This year’s election features, among others, one dominant slate and the highest number of independent candidates in recent years. Continuing this transgressive campaigning is dangerous. After all, more so than ever, this year’s election can very well determine the future of slate politics at UCLA.

In order to ensure a fair and substantive discussion on the issues facing the undergraduate student body, not to mention maintain the accessibility of USAC elections, candidates are entrusted with participating in an election bereft of foul play. And this year’s candidates need to do good on that promise.

Let’s be clear, though: We’re not talking about forgetting to include the ever-inspiring “#USACVoiceYourVote” hashtag at the end of Facebook posts or any of the other minor violations for which the USAC Election Board issues many of its sanctions.

We’re talking about the big guns: allegedly selling drugs and alcohol to finance slates or having candidates campaign in students’ faces while they’re trying to vote.

Many of these campaign violations can stem from candidates and supporters campaigning too eagerly or haphazardly, like handing out flyers inside buildings or leaving gaps in their finance reports. Of the 13 complaints filed during last year’s campaign, eight involved either promoting candidates in inappropriate locations or failing to promptly and accurately disclose funding sources.

They may not seem like a big deal, but these violations ultimately demonstrate a disregard for thoroughness and integrity of rules. After all, these same candidates are, if elected, tasked with addressing students’ needs and wielding nearly $5 million in student fees. In these positions, the repercussions of not strictly adhering to rules can run much deeper than simply being barred from campaigning for a few hours: they can damage a council member’s credibility as a trustworthy steward of the student body’s needs.

Certainly, we can shrug off these concerns as just another consequence of everyday politics. Violations are an almost-inseparable facet of USAC elections as we know it and have happened nearly every year in recent history. But the consequences are far too dire this year.

Bruins United has dominated the slate political scene since the demise of the LET’S ACT slate in 2015, and this year’s torrent of independent candidates – and a newly formed Defend Affirmative Action slate – can make or break the notion that student government elections are democratic and accessible for all. If candidates stumble their way into Kerckhoff 417 after committing violation after violation – be that because of slate support or ineffective enforcement on the part of the election board – USAC can kiss its integrity goodbye.

For years, USAC has sought ways to better engage the student body. Elections provide an important opportunity to broaden the council’s diversity, not just in terms of slate representation, but also in terms of ideas. The excitement that accompanies this prospect of a diverse council can sometimes cause candidates to get caught up in the competition and lose sight of the larger purpose of these rules: keeping these elections fair and equitable.

Let’s make this year’s election one where candidates stray away from flippant violations and Bruin Walk is saved from the excessive drama that results. Maybe then, students will go out and voice their votes.