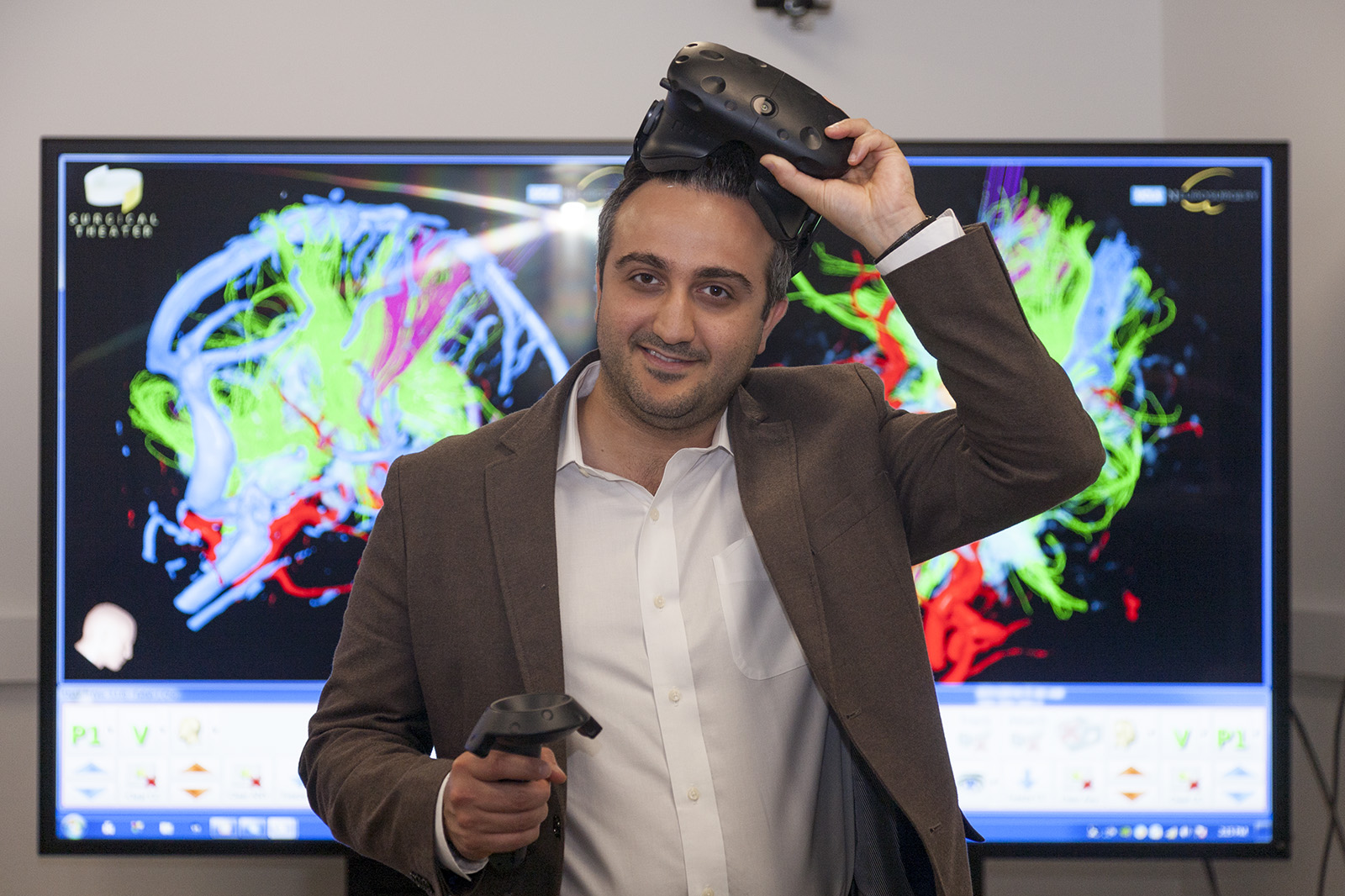 Fallah carefully maneuvered around bundles of neon green brain matter and bright red blood vessels in a three-dimensional scan to reach his target: a tumor nestled deep in the brain.

Virtual reality is one of many novel technologies UCLA doctors are using to treat patients with neurological conditions. Fallah said virtual reality, which was introduced as a surgical technique two years ago, allows him to practice a surgery beforehand by working with a complex, three-dimensional scan of the patient’s brain.

“Virtual reality lets me see the image (of the brain) in great anatomical detail because the greatest concern during surgery is that you can cause a lot of collateral damage if you don’t understand and respect the surrounding tissue,” Fallah said.

Other technologies that have been invented decades ago are now becoming more widely used. For example, Fallah uses laser technology, which was first introduced a decade ago, for fine-scale surgeries that would otherwise require a major operation with a lengthy recovery time and greater risk of damage to surrounding tissue.

He first drills a small hole in the skull and brain of a patient and then inserts a thin laser fiber until it reaches the target site within the brain. A pulse of electricity travels down the laser fiber, heating up the tip to burn away the damaged tissue.

He said some patients, and their parents, are initially skeptical of the new technologies.

“It’s my job to show them how dramatically their lives could be improved with surgery, particularly in epilepsy,” Fallah said. “Oftentimes, the hardest cases to treat with medication are the easiest to treat with surgery.”

Nader Pouratian, a functional neurosurgeon, said he uses deep-brain stimulation to improve function in patients with neurological and psychiatric diseases. Historically, neurologists had to damage imprecise regions of the brain to treat neurological conditions, Pouratian said. Today, surgeons can simply insert a probe and selectively burn portions of tissue in the brain.

However, Pouratian said many patients are discomfited by the idea of destroying brain tissue. Surgeons can now also use deep-brain stimulation, a technology invented approximately two decades ago, to either incite or dampen electrical activity in the brain without damaging tissue.

Inspired by cardiac pacemakers, deep-brain stimulators provide pulses of electrical signals that can alter brain activity. A battery is inserted in the chest, which links to the brain.

Pouratian said deep-brain stimulation has proved very successful in treating patients with certain disorders, such as Parkinson’s disease. For patients with other conditions, such as Tourette’s syndrome or chronic pain, the success rate is only about 20 to 25 percent.

He added one of the biggest obstacles to deep-brain stimulation is patients’ hesitation.

“Deep-brain stimulation is never a life-saving procedure, so it’s hard for people to accept that they are going to undergo brain surgery that they don’t have to have,” Pouratian said. “Typically, patients undergo the procedure about one to two years after the treatment is first suggested.”

He added the technology is gradually becoming capable of responding to its environment and brain activity. For example, some deep-brain stimulators used in epilepsy attempt to prevent epileptic activity by predicting when it will happen.

Pouratian said he has also been collaborating with Second Sight, a company that aims to restore vision for the blind, to develop a deep-brain stimulator.

Current technology requires patients to wear glasses with an attached camera that transmits visual information to the retina. Pouratian said a deep-brain stimulator could bypass the retina entirely and directly trigger visual electrical activity in the brain.

Jason Lerner, an electrophysiologist and pediatric neurologist, uses electroencephalograms – a detection device for electrical activity in the brain – to assist Fallah with surgical preparation.

He said the EEGs can help pinpoint the region in which seizures are originating to help Fallah decide where to make the cut.

He added new technologies have allowed EEG electrodes to be placed directly on the brain instead of on the scalp, allowing for a more accurate readout.

“Epilepsy has a huge stigma and it has one of the most severe impacts on quality of life,” Lerner, whose wife suffers from epilepsy, said. “We’re always looking at ways to better (our technology).”