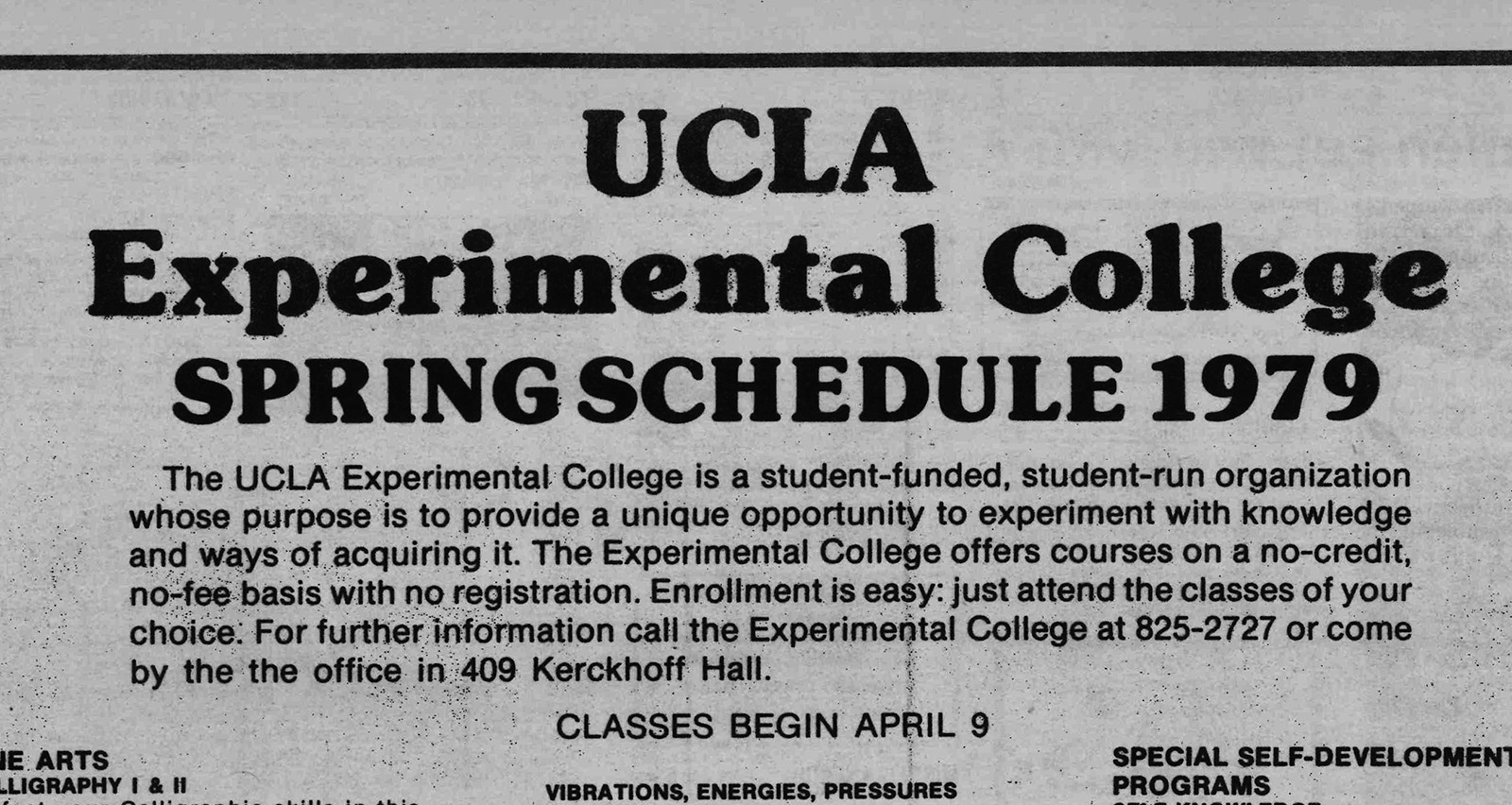 If the university brochures and talking heads on TV are to be believed, college is a time for exploration and self-discovery. Indeed, UCLA has offered opportunities for students to challenge themselves and expand their intellectual horizons both in and outside the classroom.

And then there was the UCLA Experimental College.

A 1979 advertisement in the Daily Bruin described the spring schedule for UCLA’s “Experimental College.” The college, sponsored by the now-defunct Student Education Policies Commission, described itself as “a student-funded, student-run organization whose purpose is to provide a unique opportunity to experiment with knowledge and ways of acquiring it”.

What that amounted to was the Renaissance Man’s fever dream. The classes – taught by students and offered at no charge – delved into topics ranging from the fine arts to self-development to recreation.

Some were practical. One class sought to help students start their own businesses by teaching them how to examine risks and benefits in the corporate world. Another taught students photography and the mechanics of a camera – a valuable skill in an era when telephones had barely acquired buttons, let alone high-definition cameras.

Other classes were more spiritually based. “Peace Through Spiritual Clarity” promised to unlock student’s “full potential” by overcoming internal mental divisions. There were also classes on biorhythms, yoga and practicing assertiveness.

But apparently that wasn’t “experimental” enough for the burgeoning program, because among the self-help and practical skills classes were some courses that were, let’s face it, really weird.

Take, for instance, the “Metaphysics and Psychic Development” class. The course description stated that students would learn about “psychic abilities, clairvoyance, mental telepathy, mind force, white light and healing powers,” in addition to learning “how to see human auras and to understand love.”

Those were pretty lofty goals for a weekly three-hour class, and there’s no reports on psychic Bruins walking around campus. Perhaps they simply learned to conceal their newfound powers.

Another course offered brave students a look into “Macrophilosophy”, or overriding one’s “micro needs” to reach a higher state of being. I had no idea what that actually means so, as the ever-inquisitive journalist I am, I googled it: macrophilosophy requires adherents to accept their worldviews and achieve a higher state of being which would allow their astral forms to time travel.

Yes, time travel. And this (what I assume to be) introductory-level class apparently included “field trips to the future via an altered state of consciousness.” Imagine having that on your transcript.

So yes, classes on American theater, astrophysics and the history of electronic dance music are cool, but I can’t say they provide quite as much oomph on your resume as psychic powers or time travel.

Nonetheless, there’s still a lot of cool classes offered at UCLA in the present, and although the Experimental College may no longer being experimenting, students can still expand their borders and gain some truly valuable experiences from their college education. And maybe those skills will help our future generations better deal with those astral forms from 1970s kids.