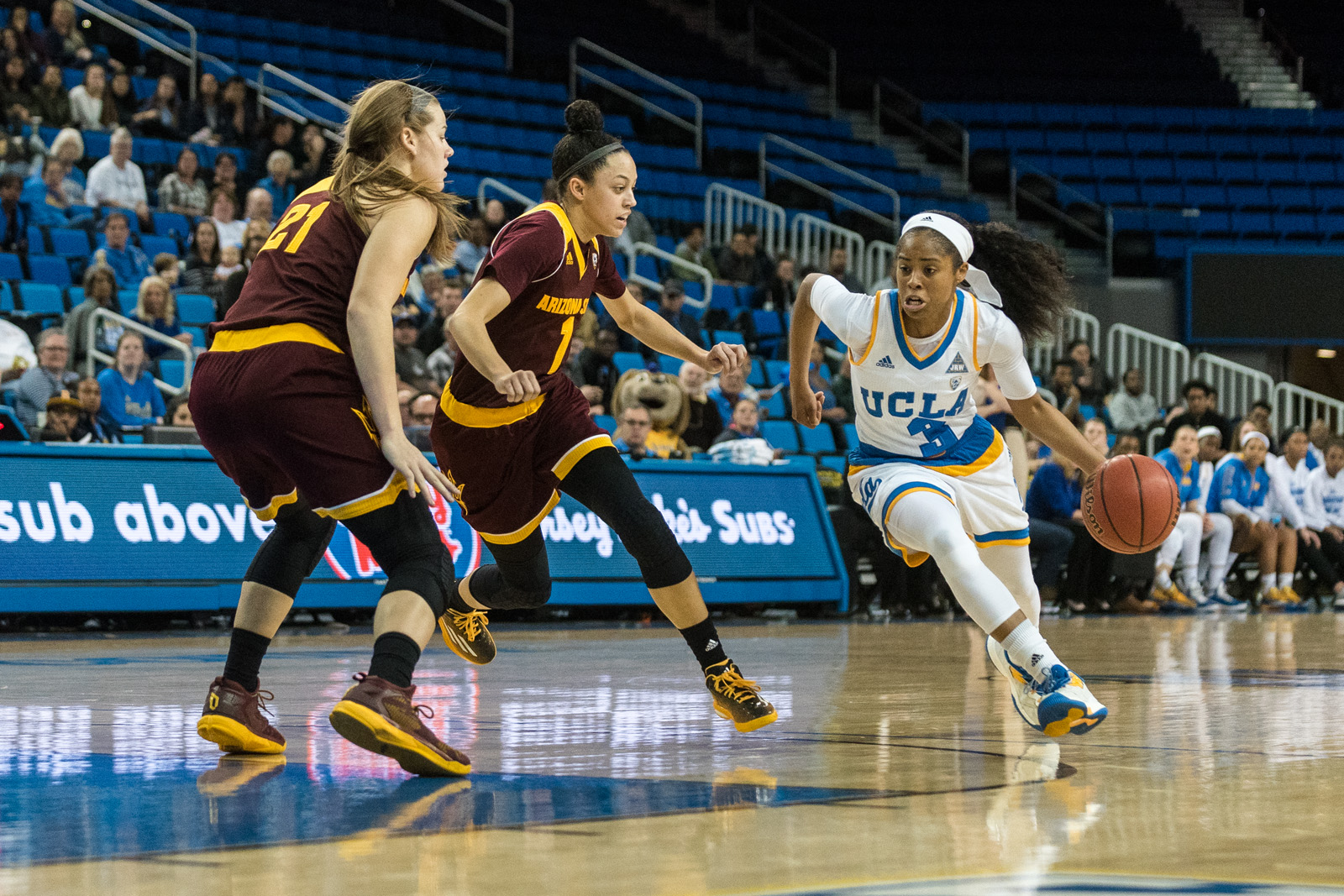 During a season in which the Bruins may have underperformed per their preseason goals, junior guard Jordin Canada was a bright spot. Canada led the team in points per game, assists and steals with 17.8, 242 and 85 respectively.
(Kristie-Valerie Hoang/Daily Bruin)

The women’s basketball team had a season that was defined by what it wasn’t.

At the beginning of the season, coach Cori Close had a vision for the roster.

“I really like our team’s ability to shoot the ball,” Close said in early November. “We’d like to make eight 3s a game. That’s our goal.”

At the time, the team looked to be full of shooters. The eight 3s a game that Close hoped for didn’t seem out of the question. In the Bruins’ third game of the season, they made eight in the first half alone. They had the appearance of the team that could win games from the outside.

It didn’t happen that way.

The Bruins slumped from behind the arc. They kept firing away, but their goal of eight a game became elusive. By the end of the season, the team had shot the second-most 3s in the Pac-12, but finished with the third-lowest percentage at .305.

“Out of the past four years, this has been the worst drought of my career,” wrote redshirt senior guard Nicole Kornet in her blog midway through the season. “I’ve been purposefully avoiding the stat sheet because, well, it’s not too hard to calculate a bunch of goose eggs.”

Kornet followed her self-critique of her shot with a corollary.

At the time of her post, Jan. 31, that was true, too. They were on a six-game winning streak.

UCLA started the season ranked No. 9, and after some initial struggles, seemed to be back to where it was predicted to be, contending for the top spot in the conference.

The team lost three out of its next four games, two of them against then-unranked Oregon and Cal. The Bruins fell to No. 18 in the rankings, and the chances of a Pac-12 championship slipped away.

“We’ve gone through a lot this week,” Close said after two back-to-back losses during that span. “We’ve had to do soul searching.”

The team was not on a promising trajectory.

All-conference junior point guard Jordin Canada got injured during the team’s slump. The season had the potential to get even worse with guard Kelsey Plum and the Washington Huskies lurking, hoping to add to the Bruins’ losing streak.

But, like much of UCLA’s season, that didn’t last either.

Canada played through her injury, and the team won its last four conference games of the season.

“I thought we did a good job, overall,” Canada said at the end of the regular season. “I think we’re, what, 23-7, or something like that.”

Canada didn’t mention the injuries, the poor shooting or the lack of a regular season conference title.

The team lost to Oregon State in the Pac-12 tournament and then to UConn in the NCAA Tournament.

Though the season wasn’t a lot of what UCLA may have hoped it would be, as Canada pointed out, it wasn’t bad either.