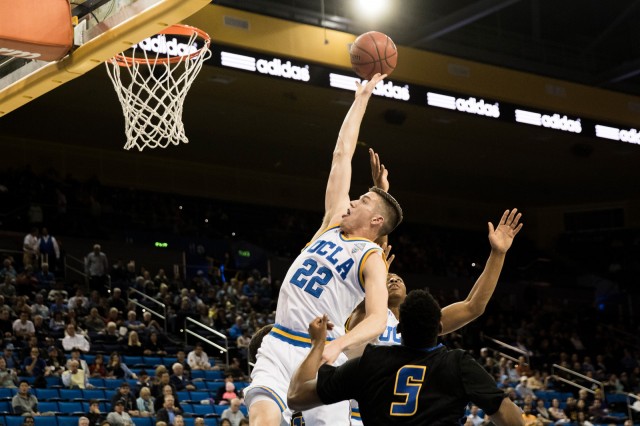 Freshman forward T.J. Leaf announced that he will not return to UCLA for a sophomore season, instead declaring for the 2017 NBA Draft. (Austin Yu/Daily Bruin senior staff)

Leaf averaged 16.3 points per game as a 19 year old, helping UCLA to a Sweet 16 finish in his lone season in Westwood. The Bruins fell to an overpowering Kentucky Wildcat squad that was out for revenge a week ago.

Freshman guard Lonzo Ball announced immediately after that game that he would be entering the draft. Leaf, while widely anticipated to declare, waited a few days to announce that he intends to sign with an agent.

“TJ had such a great season for us, and I completely support his decision to pursue his dream,” said coach Steve Alford. “I’m proud of what he was able to accomplish this season. He brought so much to our team, both on and off the court, and we’re certainly going to miss him.”

The 6-foot-10-inch standout averaged 16.3 points over the course his year at UCLA and is expected to be selected in the first round of the draft.