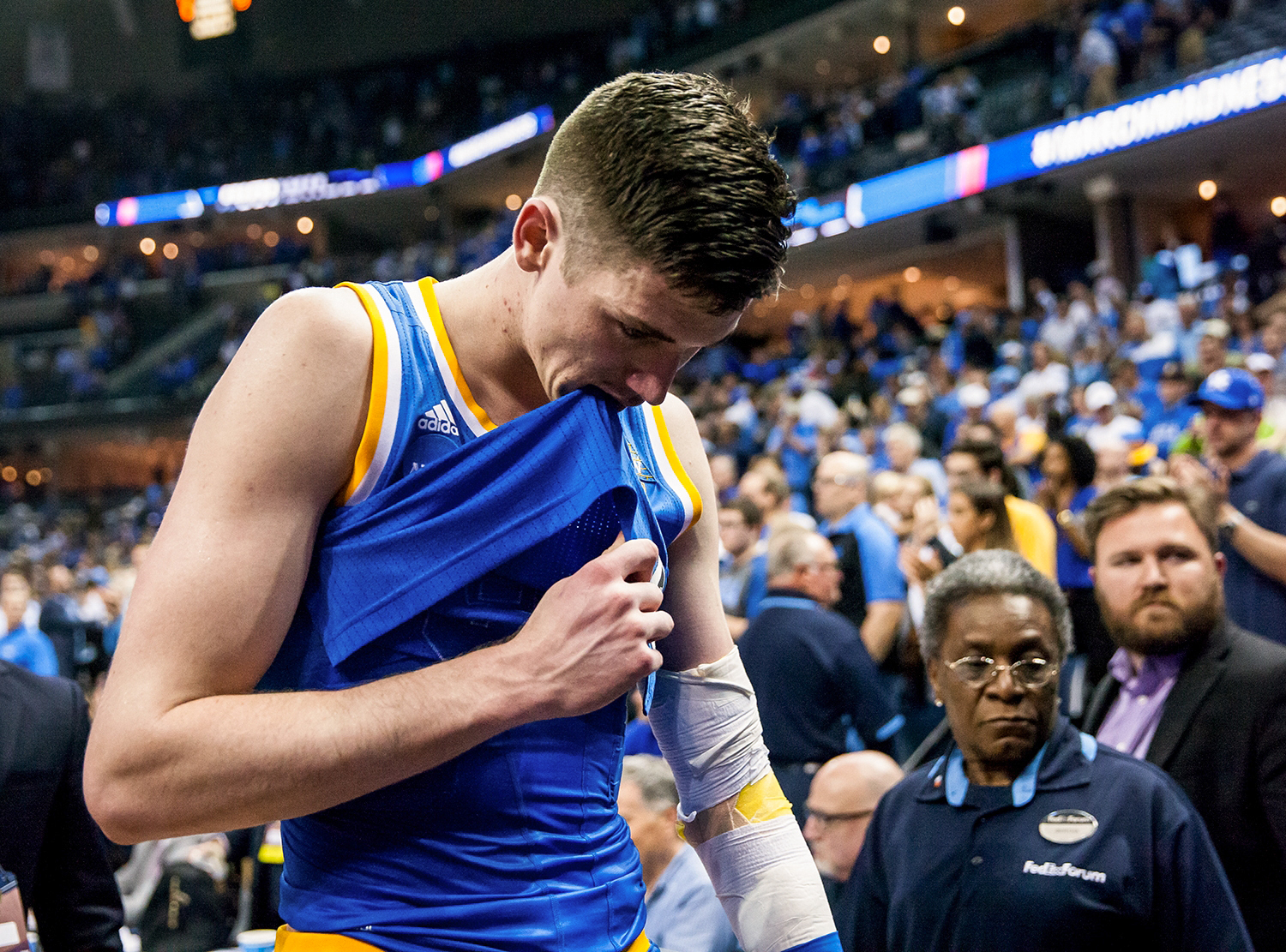 UCLA’s season ended with a loss in the Sweet 16. Freshman forward T.J. Leaf, who many predict will join Lonzo Ball in the NBA draft, choked up after the game. (Aubrey Yeo/Daily Bruin senior staff)

T.J. Leaf un-tucked his jersey as he walked toward the UCLA bench and brought it up to his eyes.

“It sucked,” the freshman forward said after the Bruins were eliminated from the NCAA Tournament by Kentucky on Friday. “When the buzzer sounded, it sucked.”

Not only did the No. 3 seed Bruins (31-6) fail to reach their goal of a national championship but by losing in the Sweet 16, they also missed out on three more opportunities to take the floor together.

“It sucks to lose, but the thing that hurts the most is that I won’t be able to play with these guys again,” junior center Thomas Welsh said. “This team won’t be the same next year, no matter who stays or goes.”

Among the eight primary rotation players, senior guards Bryce Alford and Isaac Hamilton and freshman point guard Lonzo Ball are certainly gone. At this point, it’s unclear which other Bruins will leave.

What is clear, though, is that this group – whose fast-paced brand of basketball reinvigorated a disgruntled fan base and captured the attention of the nation – will never play together again.

“It was just so much fun to play with these guys,” Welsh said. “It was a hell of a ride.”

It was quite the ride for the fans, too, with the Bruins’ electrifying style of play boosting attendance numbers to their highest levels since 1995-1996, the year after UCLA’s last national championship.

Even the rest of the nation seemed to want to believe in this team. Why else would UCLA, a No. 3 seed with a defense that should have disqualified it from the national title conversation, have been the sixth-most popular pick to win the championship among ESPN Tournament Challenge participants?

“Obviously, winning is fun, but how we went about it was remarkable,” coach Steve Alford said. “The character on this team, how they were as teammates, the unselfishness was so fun to watch, and they were so fun to coach.”

Ultimately, that wasn’t enough. The defense that had been questioned all year long cracked against Kentucky’s pair of freshmen guards, Malik Monk and De’Aaron Fox.

As Fox stepped to the free-throw line for what would be his 38th and 39th points of the night, Bryce Alford crouched just beyond the half-court line and smacked the court with his right hand, his eyes welling up. He stayed in that position until Fox released the second free throw, at which point he stood up and used his jersey to dab at his eyes.

Bryce Alford received the ball a few seconds later and hoisted up the final shot of his college career, the final shot that this year’s Bruins would ever take.

The shot was tipped and fell several feet short of the rim.

It wasn’t exactly a fitting end to the season: The team that made more shots than any other in the country couldn’t even draw iron on its final one.

Sitting at his locker after the game with a white towel draped over his head, Leaf stared ahead blankly as he tried to come to terms with the end of the season.

“This was the funnest year I’ve had playing basketball my whole life,” Leaf said. “It sucks it’s over. I don’t even know if it’s hit me fully yet, honestly. I think it will hit me later tonight or tomorrow or maybe even the end of the week when we’re not having practice and we’re not meeting.”

Seemingly pondering for the first time that there would in fact be no more practices and no more meetings, Leaf sighed.

His voice choking slightly, he said it once more.