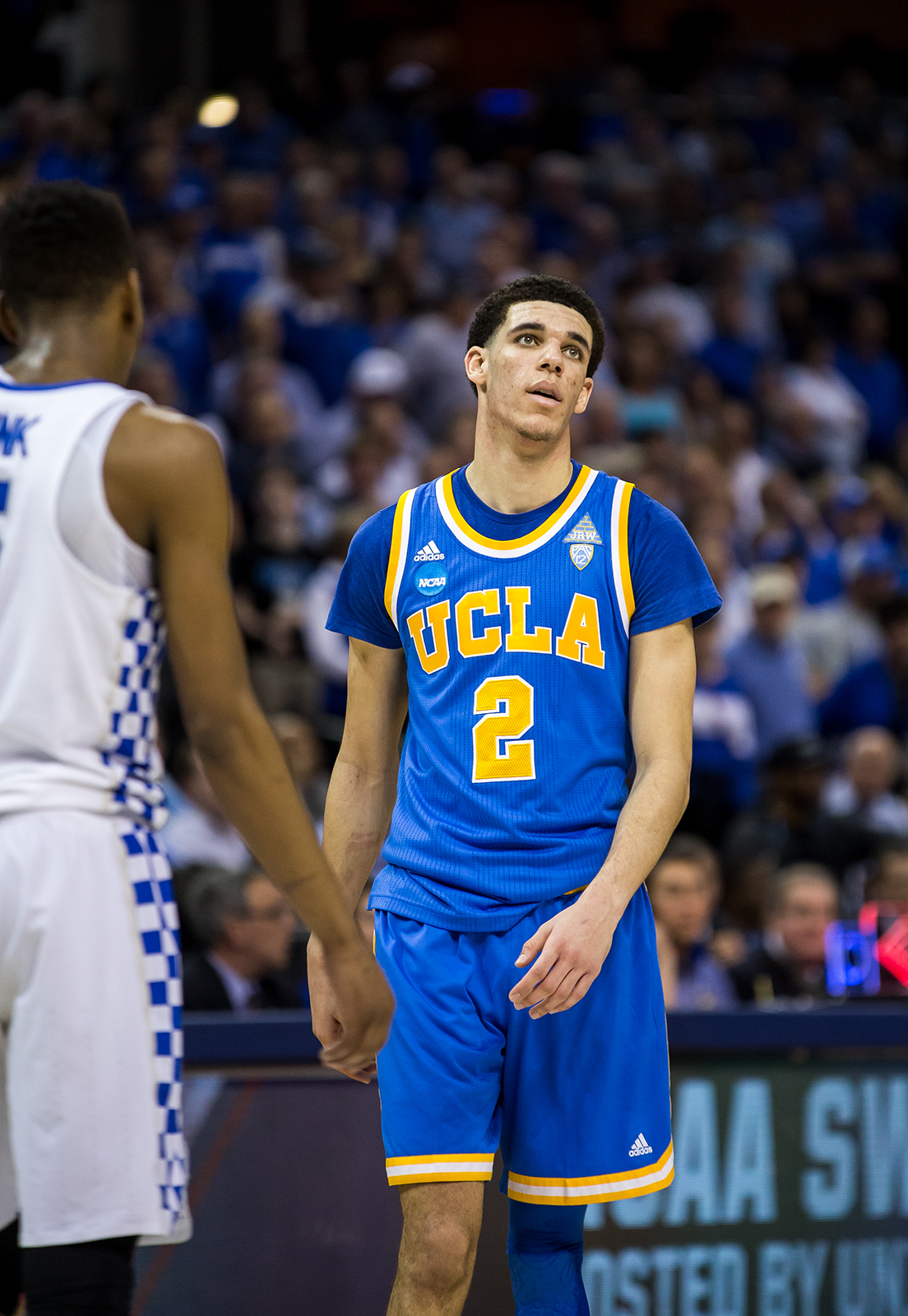 Freshman Lonzo Ball scored 10 points in what is likely his last game for UCLA. The point guard is a projected No. 2 pick in the upcoming NBA draft. (Aubrey Yeo/Daily Bruin senior staff)

MEMPHIS, Tenn. – Ball till you fall.

UCLA’s season ended Friday night in Memphis, falling in the Sweet 16 for the third time in four years.

Behind the freshman guard duo of De’Aaron Fox and Malik Monk, Kentucky led for the entire second half, before advancing to the Elite Eight with a 86-75 win over UCLA.

Fox scored 15 points in the first half, finishing with 39 on the game. Monk turned it on after halftime, with 14 of his 21 points in the second half.

Freshman point guard Lonzo Ball, playing in his last game as a Bruin, dished out eight assists but couldn’t find a way to save UCLA’s season. He finished with 10 points, three rebounds and four turnovers.

Ball, who is widely expected to be a top-three pick in the upcoming NBA draft, was visibly limping, but stayed in the game until the final buzzer.

“I just didn’t make enough plays for my team, put that one on me,” Ball said.

The Bruins were only down by three at the half, but the Wildcats forced seven second-half UCLA turnovers while coughing the ball only once themselves.

“I really thought that the difference in the game was that we had 13 turnovers and they had six,” said coach Steve Alford. “So you get seven more possessions and eight more shots. 16 assists to 13 turnovers, that’s not who we are.”

The game was close for most of the time, as UCLA kept responding to any Kentucky attempts to pull away. But eventually, the floodgates opened and the Wildcats broke free, ending the game cruising with a double-figure lead.

“We just didn’t defend in the second half the way we were defending in the first half,” Alford said.

Kentucky scored 50 points on 51.6 percent shooting from the floor and 45.5 percent from 3s in the second half.

“It kind of sinks in pretty quick knowing that you just lost a game in the NCAA Tournament,” Bryce Alford said. “It’s obviously really emotional, it’s been a great four years. Can’t really complain about anything. Being a senior and in four years having three Sweet 16s, it’s just been a blast to play at UCLA.”

Ball till you fall. On a Friday night in Memphis, UCLA fell behind and just couldn’t find a way to get back up.

“This is a family, we’ll be together for life,” Ball said. “The relationships I built, you can’t touch that.”