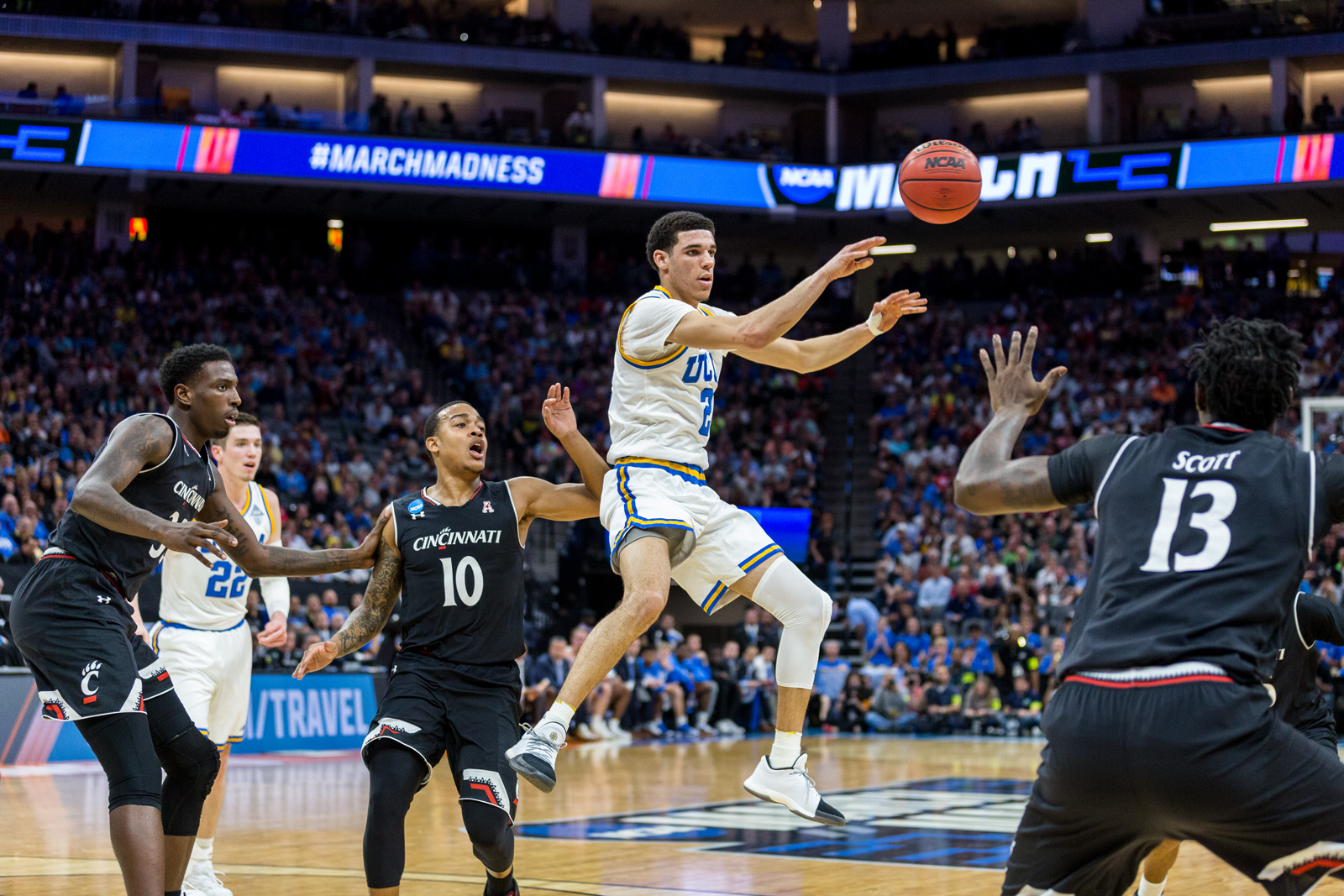 Lonzo Ball took control in UCLA’s second-round game against Cincinnati, putting up 18 points, nine assists and seven rebounds to send the Bruins to the Sweet 16. Two of his 3-pointers put UCLA up midway through the second half. (Jintak Han/Assistant Photo editor)

Watch Lonzo Ball play, and it seems as if he’s perhaps got some special formula in his mind, something that lets him know when it’s time to hit a big shot.

Ask him about it, though, and it’s a lot simpler.

“When it’s time for me to make plays, I try to do my best,” the freshman point guard said. “It’s a game of runs; I feel like I have a good feel for the game.”

Sitting next to Ball at the podium after UCLA’s 79-67 win over Cincinnati on Sunday, coach Steve Alford couldn’t help but tack on.

“He has a great feel for the game,” Alford said of Ball. “Not good. Great.”

That was evident Sunday, when Ball led the third-seeded Bruins back from a three-point halftime deficit to beat the sixth-seeded Bearcats by double digits and advance to the Sweet 16.

Ball drilled three 3-pointers and dished nine assists in the second half, becoming the first player since Connecticut’s Kemba Walker in 2011 to record 18 points, nine assists, seven rebounds and two steals in an NCAA Tournament game.

The Bruins’ offense got rolling quickly after halftime, but they wouldn’t take the lead for good until Ball buried one of his signature step-back 3-pointers around the 13-minute mark.

As if recognizing a chance to step on Cincinnati’s throat, Ball pulled up in transition on the very next possession and drained another 3-pointer.

Ball was stoic through it all, just like he has been the whole season.

The freshman’s composure – as well as his talent, of course – is one of the major reasons the Bruins were not worried when they headed into the locker room after their lowest-scoring first half of the season.

“There has never been panic in our locker room or in a huddle – a lot of that has to do with Zo’s demeanor,” Alford said. “His teammates play off that.”

Ball’s approach was exemplified in the way he thought about UCLA’s cold-shooting first half.

He didn’t have a single assist, and the Bruins shot just 37.5 percent, with freshman forward T.J. Leaf and senior guard Bryce Alford combining to go 1-for-10. That didn’t worry Ball one bit.

“Bryce and T.J. weren’t hitting the first half – that’s a good and bad thing,” Ball said. “Bad that they’re not scoring, but good that I know they’re not going to do that two halves in a row.”

Leaf and Bryce Alford combined for 24 points in the second half, and Ball assisted on five of their nine made shots.

With Ball taking control down the stretch, UCLA looked the part of the fastest-paced team in the NCAA Tournament. The Bruins scored 15 points in transition after halftime, with Ball assisting on four of their six transition baskets, per Synergy Sports.

Buoyed by the fast-break opportunities, UCLA shot 63.3 percent and averaged a ludicrous 1.49 points per possession in the second half.

“Any time we’re playing that pace, it’s a ton of fun,” Leaf said. “That’s what’s made this year so fun. It’s a bunch of good guys, we’re all best friends off the court and on the court, we play with this incredible pace. It makes for an incredible dynamic.”

Perhaps even more impressive, the Bruins continued to be able to push the pace without coughing the ball up. They turned it over just three times against the Bearcats, who had generated at least six turnovers in every other game this season.

At the center of it all was Ball, with just one turnover – steady as ever, both in his play and his attitude.

“He’s trained to be a winner all of his life and showing a lot of emotion is not part of it,” Alford said. “When your point guard plays with the poise that ours plays with, I think it has a calming effect on everybody.”