UCLA to head to Sweet 16 after defeating Cincinnati 79-67 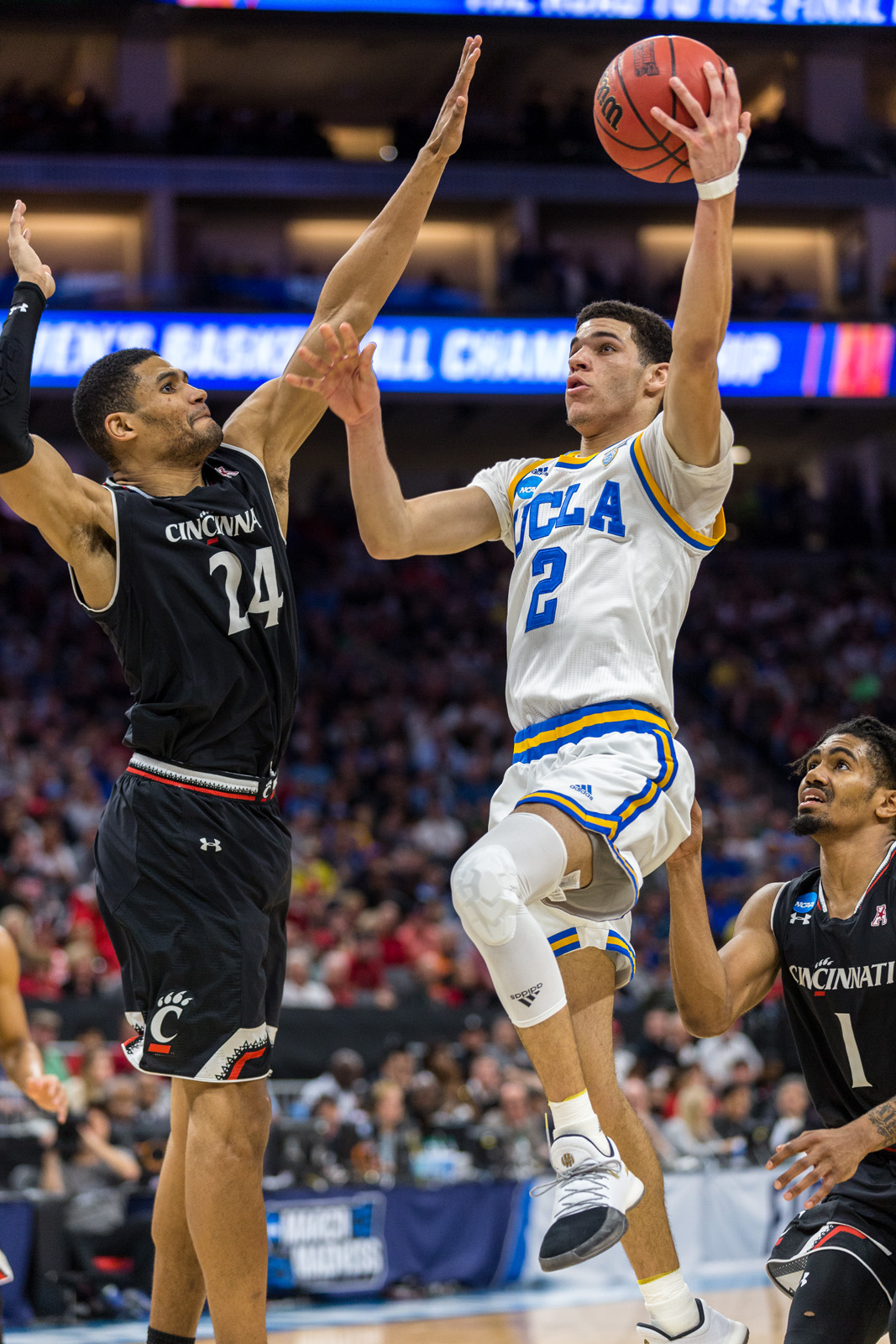 Freshman guard Lonzo Ball led the Bruins with 18 points and added on nine assists. His 3-pointers helped lead the team in the second half. (Jintak Han/Assistant Photo editor)

“Trying to slow it down sometimes works on us for a little while,” the senior guard said Saturday regarding UCLA’s matchup with Cincinnati. “But I feel like at some point, we start to get stops and then we can run. In the second half of games, we always go on a run at some point.”

That’s exactly what happened Sunday. The No. 3 seed Bruins shook off their lowest-scoring first half of the season to defeat the No. 6 seed Bearcats 79-67, advancing to the Sweet 16 thanks to a scalding offensive performance in the second half.

UCLA, which will next face No. 2 seed Kentucky on Friday, made seven 3-pointers and shot 63.3 percent from the field in the second half after putting up just 30 points in the opening period.

Freshman point guard Lonzo Ball led the way, finishing with 18 points, nine assists – all in the second half – and seven rebounds. He and Alford drilled three 3-pointers each after halftime, and freshman forward T.J. Leaf rebounded from a scoreless first half to add 11 second-half points.

“That’s been our biggest thing all year – I’ve never felt panic in this locker room,” Alford said after the win. “We’re so confident that at some point, we’re going to wear a team down and do what we do.”

It didn’t take long in the second half for the Bruins to do what they do. They came out of the locker room more active on offense than they had been at any point in the first half.

Alford drilled a 3-pointer within the first 20 seconds of the half. Two possessions later, he found Ball for an open 3-point look, but Ball instead faked the shot and rifled a pass to Leaf for an easy dunk.

It was the first assist of the night for Ball, who would end up with nine, and the first basket of the game for Leaf, who shot 0-for-5 in the first half.

UCLA then began to accelerate, with defense and rebounding spurring its dangerous fast-break game.

The Bearcats misfired on the possession after Leaf’s dunk, and senior guard Isaac Hamilton pushed the ball up-court in transition. He missed on a floater, but 7-foot junior center Thomas Welsh was there to slam home a put-back dunk.

After another Cincinnati miss, Ball tossed a pass ahead to Hamilton, who set his feet in the corner and drilled a 3-pointer.

Cincinnati coach Mick Cronin quickly called a timeout, but UCLA had already taken the lead and grabbed control of the game.

The Bruins held the Bearcats to just 41.2 percent shooting in the latter period.

“I thought our defense was the key to the second half,” said UCLA coach Steve Alford. “When we get stops, we’re a whole different type of offensive team. It takes us to another level.”

That was quite apparent to Cronin, whose team gave up far more than the 61.3 points per game they allowed on average this season.

“They’re probably the best offensive team to play college basketball in a long, long time,” Cronin said. “They’ve got a chance to win the whole thing.”