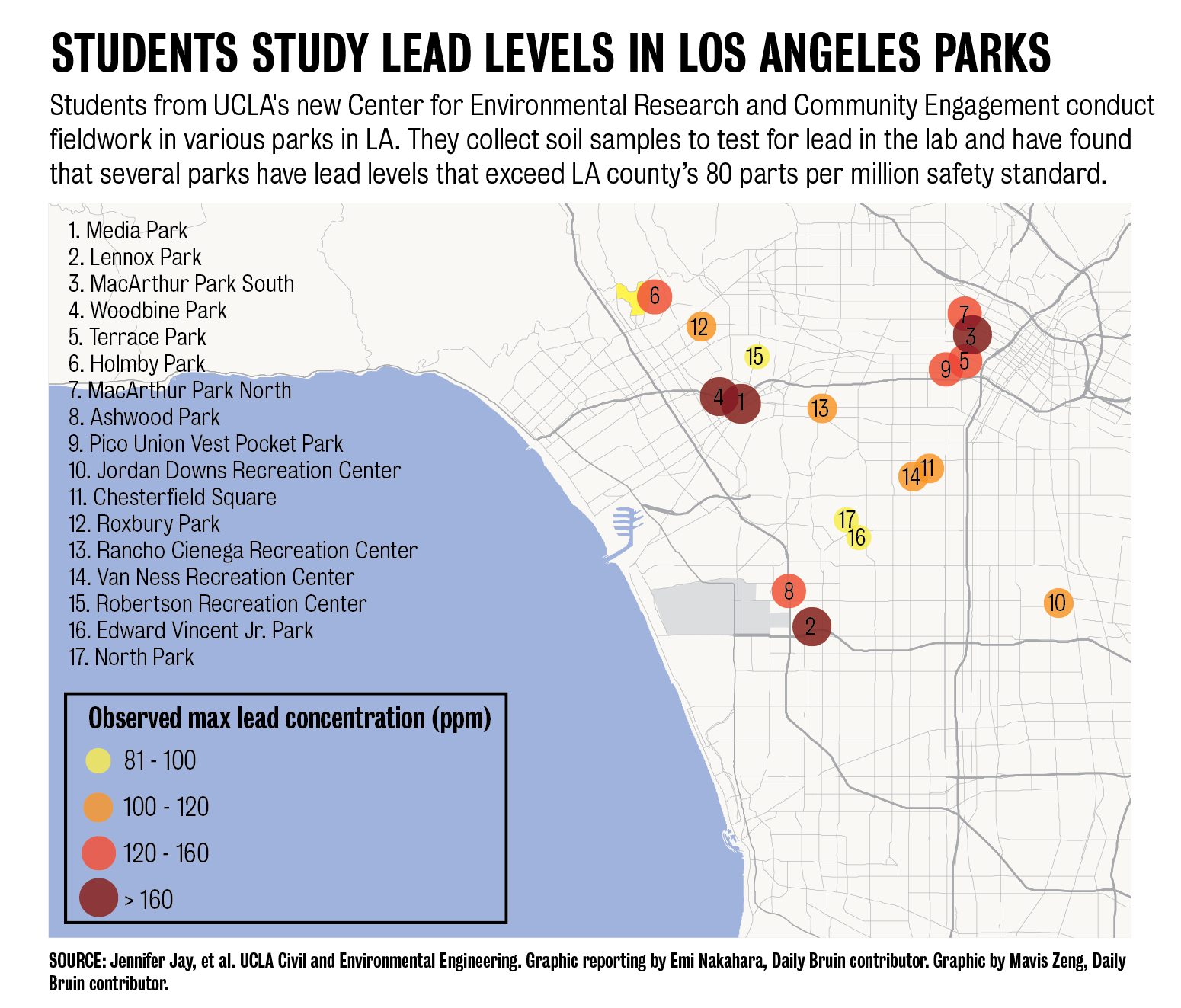 Carefree children play and roll around in dirt at parks throughout the Los Angeles area every day, unaware of the potential dangers in the park’s soil.

Students in the Center for Environmental Research and Community Engagement, have found higher levels of lead than normal in the soil of several parks in Los Angeles that could damage children’s and other residents’ health, said Jennifer Jay, creator of CERCE and an environmental engineering professor.

Students in the team have collected soil samples from 66 parks as of May 2016. For each park the students visit, they collect three soil samples and then melt the soil using hot acid to detect lead and other metals.

Jay said the dean of engineering approved CERCE last spring and the new program received its first grant from the Skyscrape Foundation, a family foundation that funds research grants, in November. CERCE researchers use the $25,000 to pay for chemical equipment and transportation to the parks.

CERCE plans to publish and disseminate the data to the community once data collection is complete in May. Jay added she hopes policymakers will put heavily tainted parks on the priority for cleanup.

“Lead poisoning is difficult to identify, so it’s important to test the environment for it,” Jay said. “The results could really impact people’s lives.”

According to the Los Angeles County Health Agency, lead poisoning can negatively affect the brain, kidneys, liver and other organs. Young children and pregnant women are especially susceptible, because lead can affect child development and learning and cause premature birth or miscarriage. Inner-city communities near factories are at greater risk for lead contamination, according to the Centers for Disease Control and Prevention.

Jay said she came up with the idea for CERCE after attending an event about a controversial housing project in downtown Los Angeles with dangerous amounts of lead in the soil from a nearby Exide factory. She advised Wayne Hung, a graduate student in civil and environmental engineering, to pursue research on the topic.

“When I take samples of the soil, I’m very careful,” Hung said. “I wear gloves, walk carefully and wash my hands right after,” Hung said. “It’s really weird when I see people lying on the soil and kids playing on it while I’m so careful.”

Hung said he expected mostly poor communities to have high soil concentrations of lead, but was surprised by data results showing rich communities, such as Beverly Hills, also having tainted soil. Hung said he has also found that old railway systems, old cars and small plants are major sources of lead contamination.

Jay said she thinks CERCE has potential to expand beyond testing for lead in soil. She said once the current research findings are published, the organization could add a more diversified set of skills and look into other types of contaminants in the soil, air and water.