Men’s volleyball looks to continue upturn in performance against Lewis 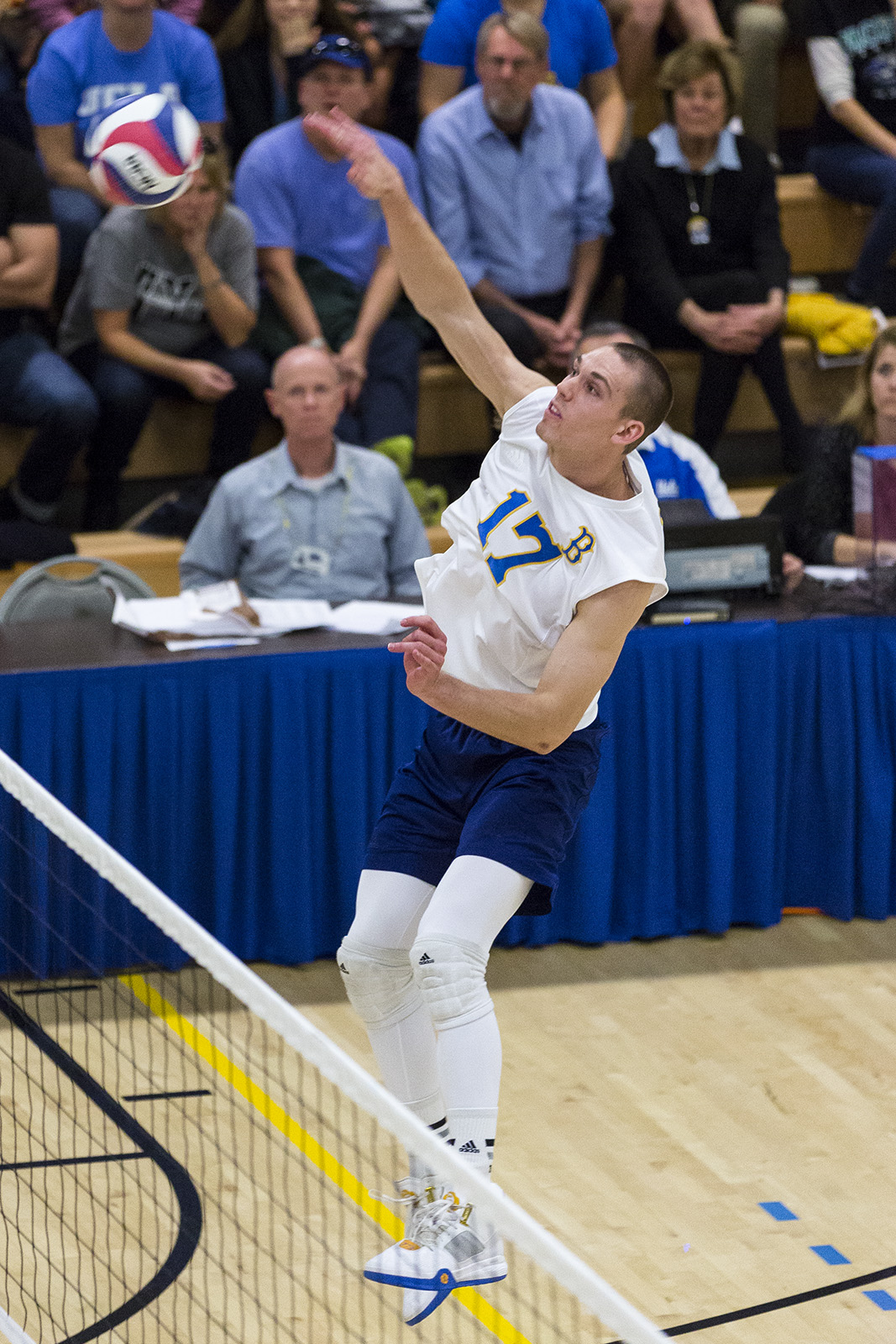 Junior opposite Christian Hessenauer has taken the reigns as junior outside hitter Jake Arnitz works his way back from injury. Hessenauer has hit for a team-high 16 and 15 kills over the last two games, respectively. (Jintak Han/Assistant Photo editor)

Despite injuries crippling its starting lineup, the UCLA men’s volleyball team has seen other players stepping up to turn things around in the second half of the regular season.

Physical injury has plagued the team since last month, which has resulted in UCLA dropping to No. 7 in the American Volleyball Coaches Association polls. During the team’s week-long hiatus, the Bruins have focused on improvements in the gym before taking on more competition.

Coach John Speraw said that he’s seen progress in the team’s defensive work, and in the blocking work of both freshman middle blocker Daenan Gyimah and junior outside hitter Jake Arnitz.

After returning from a foot injury, Arnitz has been back on the court for the past three games. He has notched 12 kills, second behind junior opposite Christian Hessenauer, to help push the Bruins to a four-set win against UC San Diego.

“We decided to lift a little bit harder and push it a little bit,” Speraw said. “We’re just trying to work on what we can with the guys that are in the gym, and see if we can keep chipping away here and there on each guy.”

The Lewis Flyers are currently riding a seven-game win streak, and boast a 7-2 record on the road.

“Lewis is a really important volleyball match. They’re an at-large bid contender,” Speraw said. “I don’t know that we are anymore, but I think we have to think that way.”

Despite dropping two of the past three games, the Bruins have improved offensively from 40 kills across three sets against Long Beach State to 61 kills over four sets at UC San Diego.

“We’re just trying to get our touches back, work on our fundamentals and make sure that we’re ready for these next games coming up,” said redshirt junior middle blocker Oliver Martin. “These are huge games for us.”

Despite members of the team’s starting lineup taking hits to their health, Speraw said that he has seen players like sophomore Dylan Missry and redshirt junior Eric Sprague capitalize on their additional playing time.

Missry has hit over .315 in the past four matches and earned a season-high 21 kills against CSUN last month. The outside hitter has seen playing time against the past nine opponents in a row.

“I think Missry’s really taken advantage of his opportunity here. Eric Sprague has done a really nice job for us,” Speraw said. “I thought we had really great four middles and I think that’s proven to be true.”

Sprague earned a season-high six points against UC San Diego. The middle blocker has contributed more playing time alongside Martin and Gyimah after senior Mitch Stahl suffered from an ankle injury in February.

“We’re going to need the guys to be healthy in the end of March and early April,” Speraw said. “So if we need to continue to rest guys, we will. We’re just going to have to keep getting better day by day.”