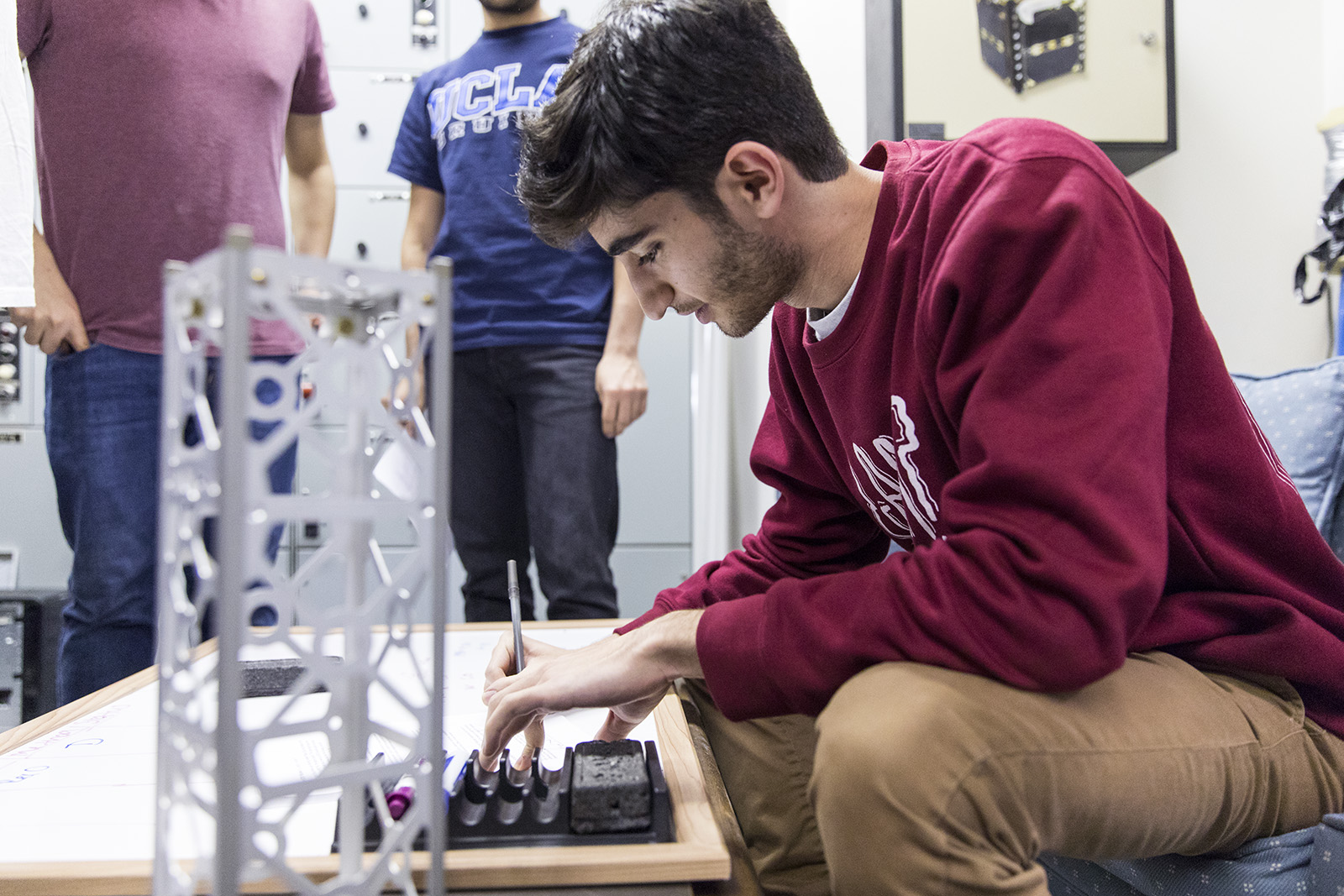 A member of Bruin Space works on the technical logistics of Project Reach, which is developing spacecraft technology for a rocket competition this summer. (Dayoung Lee/Daily Bruin)

Bruin Space is one of the newest student groups to reach for the stars – literally.

The engineering club has taken over a circuit room on the roof of Boelter Hall, which students can find by stepping out of an elevator beneath the open sky.

On the evening of March 1, the room buzzed with voices as members of the club’s Project Reach team discussed the spacecraft technology they are designing for a rocket launch this summer. Afterwards, a few stuck around to fire questions about circuit design at Bruin Space’s president, Nick Adair, who outlined diagrams on a whiteboard using blue and magenta markers.

Bruin Space originally launched in 2013, but students rebranded the club this fall as a resource center for undergraduates who want to explore spacecraft engineering. Members are currently working in teams to prepare for several competitions this year, including one hosted by NASA in Texas.

Adair, a fifth-year electrical engineering student, was previously involved with the Electron Losses and Fields Investigation team, another student club that developed a CubeSat – a satellite – for a NASA rocket mission set to launch this year that would analyze space weather phenomena.

But then, students learned the launch would be delayed until 2018.

SENTINEL-1, Project Reach’s final goal, is a bundle of equipment set to ride aboard a rocket constructed by UCLA Rocket Project for a competition in New Mexico this June. Ideally, the rocket will paint a trail 10,000 feet tall through the sky, with SENTINEL-1’s instruments collecting real-time launch data on parameters such as altitude and acceleration. The equipment is encased within a rectangular satellite frame of CubeSat design, Adair said.

As he discussed the project, Adair placed a blue prototype for the rocket’s nose cone atop the frame, demonstrating where it will sit in the final craft.

“Right now, we’re trying to build up our engineering skill base,” Adair said. “Even those who have no experience can find space in this group.”

The organization recruits students in four project tiers, Adair said. Students with little technical experience join the Sandbox Initiative, where small teams can tinker and experiment with ideas for proposals.

Earlier this year, several Sandbox teams entered the NASA Micro-g Neutral Buoyancy Experiment Design Teams competition to design tools for astronaut use in space. Of about 100 teams nationwide, two from UCLA advanced to the next round with their proposals: a hardy subsurface drill called Excalibur and a projectile drill system designed to collect surface samples from moving celestial objects.

Bruin Space launched a Spark campaign Wednesday to fund its trip to NASA’s Neutral Buoyancy Laboratory in Houston, Texas, for the competition, where it will test its self-fabricated devices, Adair said.

Sandbox had only a month to prepare for the competition, added Lydia Bingley, internal vice president of Bruin Space and a graduate student in space physics.

“We thought this was a good project we could toss (first years) in,” Bingley said. “So the day we woke up and saw that two teams had advanced to the competition, it completely blew us away.”

The higher tiers of Bruin Space each focus on a single goal. In the case of Project Overseer, that goal is creating and releasing a high-altitude balloon – a contraption filled with helium and sensors set to reach a burst altitude of 100,000 feet, Bingley said.

Project Reach, the third tier, focuses entirely on the spacecraft technology for UCLA’s entry in this summer’s New Mexico competition. The project requires advanced work in specialized areas such as systems and communications, said Ryan Weber, Reach project manager and a first-year aerospace engineering student. While some students design circuit boards, for example, others may write computer code for ground operations.

Reach is also collaborating with Vista Magnet Middle School in San Diego, which may send worms to space onboard with UCLA’s CubeSat for a science experiment, Weber added.

Weber, one of about 25 first-year students in Bruin Space, said he is learning about engineering and management as he goes. His leadership includes supporting members through a design review of Reach’s project this weekend, which could entail as many as three hours of discussion with professionals from NASA’s Jet Propulsion Laboratory.

“I’ve been trying to delegate as many tasks as possible to these students,” Weber said. “I don’t do the work for them; I let them get their hands dirty.”

Bruin Space’s fourth and highest tier, Project Rapid, recruits the most advanced engineering students in the club for the exploration and execution of future CubeSat projects on campus, Bingley added. Yet she emphasized that Bruin Space’s leaders redesigned the group with students in mind.

Chelsea Dyapa, a first-year physics student, joined a few weeks ago with only a couple lower-division physics classes under her belt.

“I’ve been interested in aerospace engineering, or getting involved with space research,” Dyapa said. “So I’m excited to build.”

The team hopes to eventually integrate life sciences into their projects and send students to the UC Berkeley Space Policy Debate in April to discuss current contemporary space law issues.

Bingley and Adair said they think it’s important to remember that huge space companies are not powered solely by engineers – they also require policymakers, artists, journalists and businessmen to reach new heights with their goals.

“It’s much like a startup culture around here,” Bingley said. “We want the next generation of students to be better than us.”