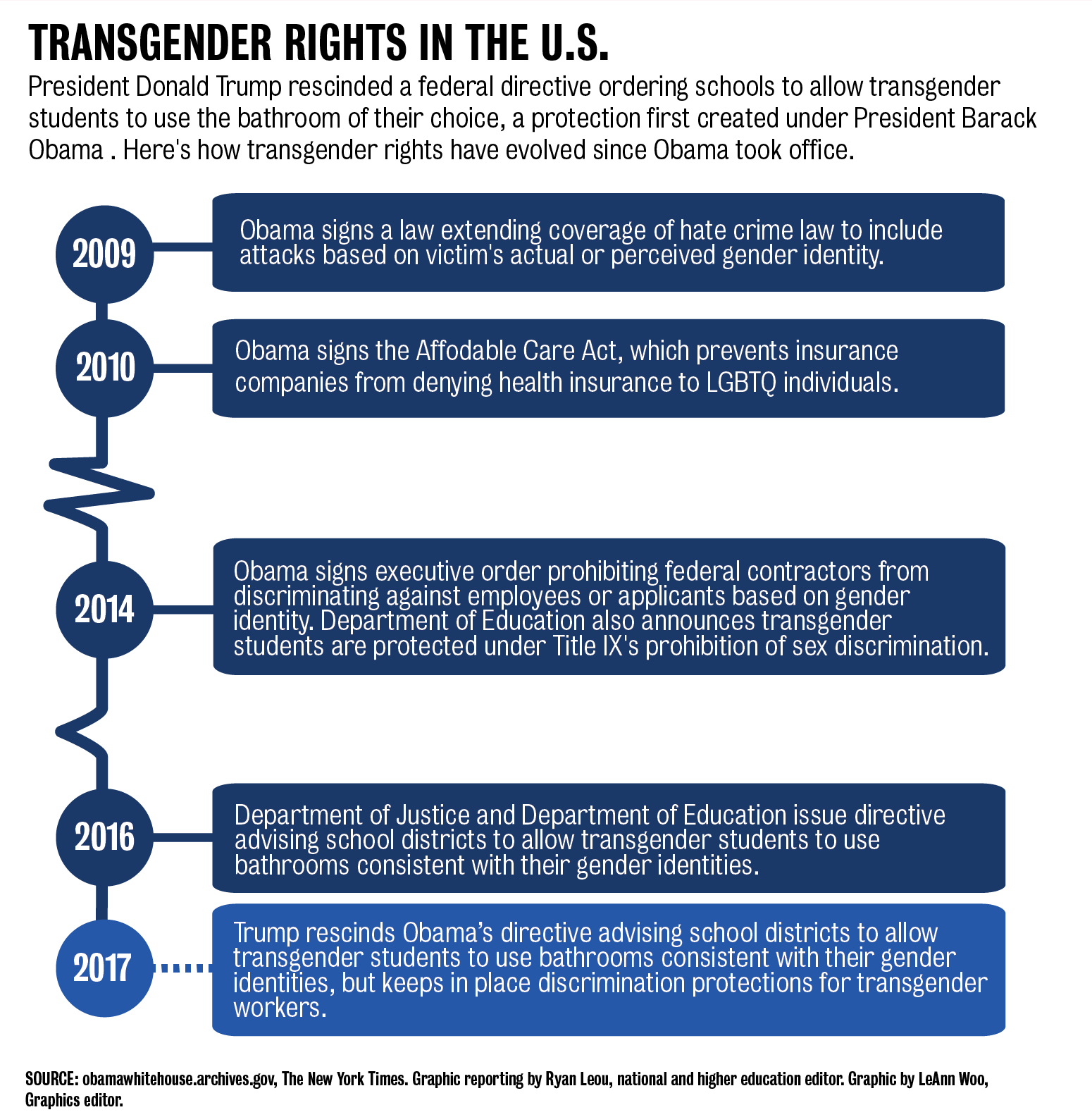 The rights of transgender students in California are still protected despite a directive administered by the Trump administration.

The guidelines, established in May of 2016, stated that Title IX of the United States Education Amendments ensures their right to use restrooms or locker rooms that align with their gender identities.

In a letter issued by the U.S. Department of Justice and Department of Education in February, the Trump administration said educational policies regarding transgender student rights should be handled by individual states and school districts.

Jody Herman, a scholar of public policy at UCLA’s Williams Institute, said she thinks people should be concerned when civil rights are discussed as a matter of states’ rights.

The Williams Institute at the UCLA School of Law conducts research on law and public policy regarding sexual orientation and gender identity.

Herman, who studies anti-discrimination protections in public facilities for transgender and gender-nonconforming individuals, said there is a history of states’ rights being used as a way to allow states to disenfranchise people. She pointed to the Civil War as an example of a time when the states’ rights rhetoric was used to preserve the institution of slavery.

California and the UC, however, are maintaining their positions in protecting the rights of transgender students.

In 2013, California became the first state to enact a law protecting the rights of transgender students to use facilities corresponding with their gender identity.

A statement by Tom Torlakson, the California state superintendent of public instruction, reiterated California’s commitment to protecting the rights of transgender students.

“California will continue to work to provide that environment for our lesbian, gay, bisexual, and transgender students regardless of any misguided directives by the federal government and the Trump administration,” Torlakson said.

In February, the University of California Office of the President echoed this reassurance in a statement.

“The University of California, in accordance with state law and in keeping with its own principles of nondiscrimination, will continue to ensure that its transgender students, faculty and staff have unrestricted access to restrooms that conform to their gender identities,” the statement said.

In 2013, UCLA was named among the Top 10 Trans-Friendly Campuses by the Campus Pride Index.

UCLA was one of the first UC campuses to cover medical needs for transitioning students under its student health insurance plan.

In 2015, UC President Janet Napolitano released the UC Guidelines for Providing Gender Inclusive Facilities, which apply to restrooms and athletic facilities in all university-owned buildings. Additionally, in April 2016, a new university policy required every UCLA building be renovated or constructed after July 2015 to have a gender-inclusive single-stall restroom.

Andreas Papadopoulos, a member of Transgender UCLA Pride and fifth-year biology student, said they think the Trump administration’s rollback of Obama’s guidance is sad but unsurprising.

TransUP is a student group for transgender, genderqueer, gender-nonconforming, nonbinary, gender questioning and allied members of the UCLA community.

“By denying trans people protection from harassment and discrimination while using bathrooms, Trump is sending a very clear message: Trans people have no place in the America he wants to make great again,” Papadopoulos said.

Eris Tehrani, a TransUP member and graduate student, said she thinks Trump’s impingement on transgender rights is about more than just restrooms – it’s about transgender people’s freedom to exist in public space.

“If we can’t use the washrooms we feel comfortable with, then our mobility is seriously hampered,” Tehrani said. “The people who support this bill – and who really understand what it means – simply don’t want us to exist. Unfortunately for them, we will continue to exist.”

Tehrani said that if transgender students are forced to use facilities that are unsafe for them, then their participation in society will become more taxing for them.

Tehrani said she thinks everyone should care about Trump’s rollback whether or not they are affected by the decision.

“So many people have been put at risk because of this, and that’s reason enough to care,” Tehrani said. “We’re all human. You are, too. You should care.”