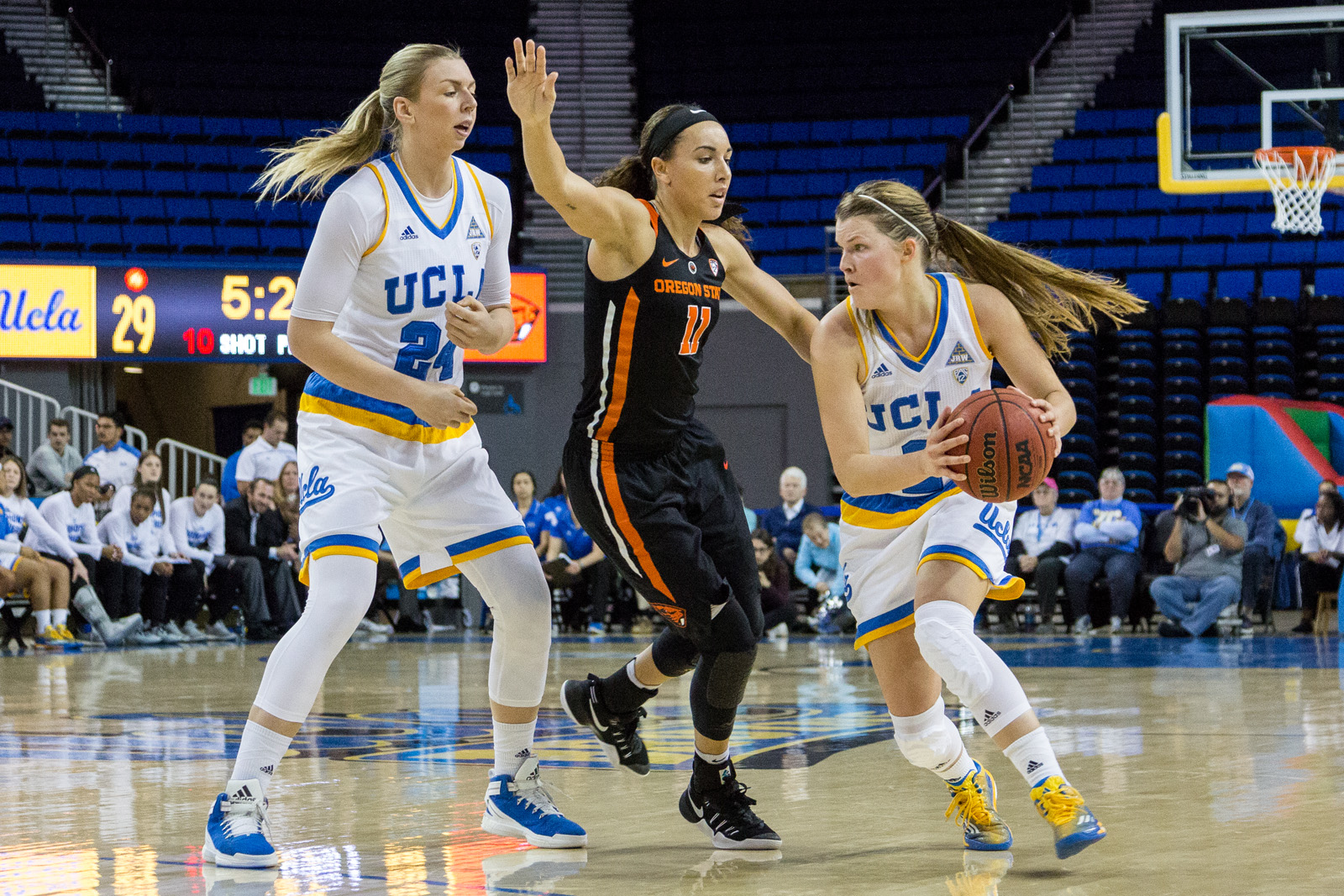 Redshirt senior guard Kari Korver (right) leads UCLA with 62 3-pointers this season – in her career, she’s made 241. She has also been voted as a team captain for the past four years. (Amy Dixon/Daily Bruin)

After the loss, junior guard Jordin Canada was in tears while talking about her teammate.

“There’s no one that I’d rather play basketball with than this one right here,” Canada said, pointing to Korver who was also in tears. “She is the epitome of a basketball player. Her heart (and) her dedication to this team is unbelievable, and sometimes it doesn’t show on the court, but off the court you have no idea how much she affects this game and affects our team.”

Korver has been one of the captains on the team for the past four years, including her sophomore season when she didn’t play at all while recovering from knee surgery.

During that season, Korver did everything she could do to contribute. She was one of the few players with a car that year, so she would drive her teammates around whenever she could.

On the court, Korver takes the role of a spot-up shooter who helps stretch the floor, largely the same role as her cousin Kyle Korver, who plays for the NBA’s Cleveland Cavaliers. Even though her shooting can be somewhat streaky, Korver always looks for ways to help her team excel.

“I asked her a couple weeks ago, ‘Would you rather be just a good shooter or a really good basketball player?’” said coach Cori Close after Korver made six 3-pointers against Arizona in January. “Because I think she’s a really good basketball player. Just because her shooting numbers aren’t what she wants them to be, we can’t take her off the floor most of the time because she changes the game.”

Korver has been known for her hustle on the court since her days of high school basketball in Cerritos, California.

Ranked as the number 99 prospect in the class of 2012, her scouting report on ESPN read: “(Korver’s) approach on both ends is to leave it all on the floor and anything she might be lacking physically is more than compensated for competitively. Still a steal but no longer a secret.”

With Close being hired in 2011, Korver was one of the players that she recruited and is the last player remaining from the 2012-2013 squad. She and Canada are the only two players that were starters in for the 2015 team that went to the Women’s National Invitation Tournament and the team that made it to the Sweet 16 last season.

“When we’ve had year after year after year of high levels of competitive greatness, I think we’re going to look back and say Kari Korver helped us start that,” Close said in 2014. “Kari Korver’s example is the one that started that foundation.”

Korver still has basketball left to play. The team is more than likely going to the NCAA Tournament, where they are currently projected by ESPN’s Charlie Creme to be fourth-seeded, which would give them hosting privileges for the first two rounds.