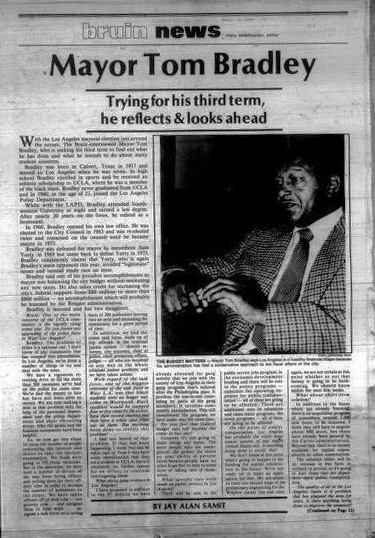 With the upcoming mayoral elections in mind, the Quad looks back on Daily Bruin’s 1981 interview with Tom Bradley. (Daily Bruin archives)

Some things never change. Especially when it comes to politics.

If you haven’t heard, Los Angeles is holding its city elections next week on March 7. Angelenos are being entrusted to determine a multitude of things, like whether or not the city has the power to regulate and tax marijuana, if development projects should be stalled for two years and – most importantly – whether or not LA harbor department leases should be extended from 50 to 66 years.

Of course, if the technicalities of city measures don’t excite you, it’s worth noting the upcoming elections will also give Angelenos a chance to select their next mayor.

This year, a whopping 11 mayoral candidates are battling it out for the prestigious City Hall armchair. Contestants include Eric Garcetti, the current mayor of LA who is running for his second term in office, and others such Mitchell Schwartz, a political strategist who directed President Obama’s 2008 campaign in California. There’s even Paul E. Amori, a political outsider running on the “Vote 4 Love” campaign to spread more love in LA. Talk about variety.

The candidates have brought many issues to the table, such as LA’s homelessness, troublesome traffic, lack of affordable housing and even the LA Department of Water and Power’s lack of transparency. Garcetti has campaigned on the promise to build on the achievements of his tenure these past four years, while other candidates have pointed to the persisting problems of LA as reasons for not reelecting him.

Now, this might sound like politics as usual, but it should come as a surprise to know that this year’s mayoral election is similar – arguably a hairline short of identical – to the one 36 years ago. Of course, Garcetti wasn’t running for mayor back then, but as the Daily Bruin reported on April 6, 1981, Tom Bradley was.

In a question-answer session, Tom Bradley spoke to editor Mary Astadourian about his campaign for a third term as mayor and the challenges the city was facing at the time.

Astadourian questioned Bradley on a variety of issues, like the city’s crime rates, the potential federal government funding cuts to the city under the then-Ronald Reagan administration, LA’s bid for the 1984 Olympics and the solution to the city’s ailing transit system. And when you stop and think about it, these are many of the same issues Angelenos face today.

Of course, some of Bradley’s answers differ greatly from Garcetti’s stances. For example, Bradley spoke vaguely about addressing the city’s mess of a transit system, telling Astadourian how uncertain he was about the effects of increasing commuter lines in the city – a process, he claimed, would take a lot of time and capital funding. On the other hand, Garcetti helped author and pass a ballot measure to revitalize LA’s transportation system through rail and bus expansions.

And when asked about the then-rapidly rising crime rate, Bradley pointed to his efforts to increase the city’s police force and the number of patrolling vehicles. On the contrary, the Los Angeles Police Department’s leadership – and Garcetti – has worked to address the tension caused by policies such as Bradley’s.

By all means, this isn’t an apples-to-apples comparison, considering Garcetti has a 36-year head start on Bradley. However, despite the two men’s differences, it’s clear the road to reelection – at least in LA’s case – can be fairly cookie-cutter at times.

Considering Garcetti isn’t all that worried about his competition, that might be a fair way to put it.