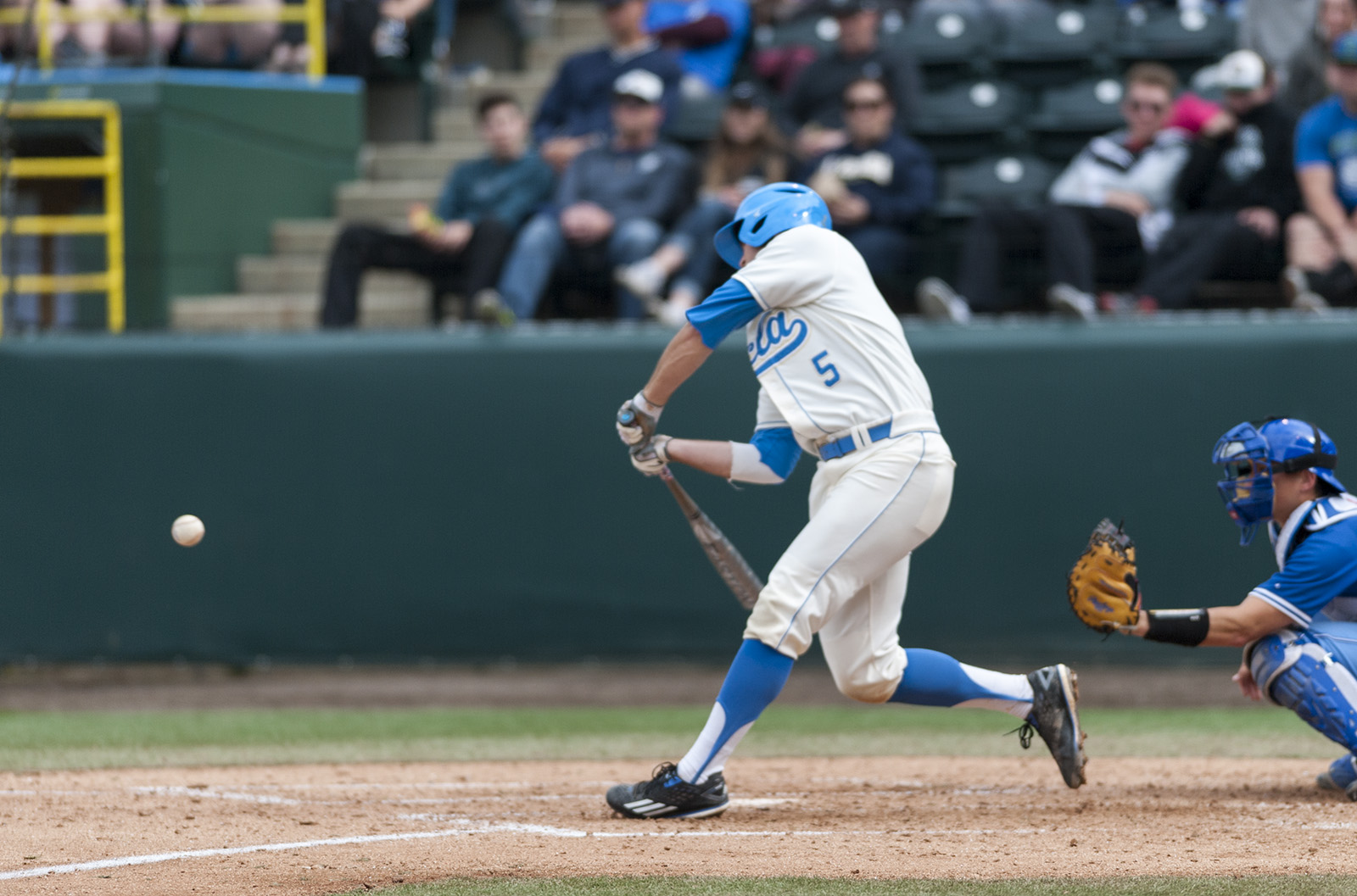 Sean Bouchard went three for three with a home run and a walk in Tuesday’s loss to Cal State Northridge. On the season, the junior first baseman is batting .478 with a slugging percentage of 1.000. (Isabelle Roy/Daily Bruin senior staff)

“We have to be better,” said coach John Savage. “This is our first road test, and we didn’t do what we needed to do. It was disappointing.”

Senior Moises Ceja came on in relief and allowed a game-tying homer to the first batter he faced and a single to the second before Savage pulled him in favor of redshirt sophomore Matt Walker.

The Bruins gave up 90 feet five separate times in the remainder of the inning. One Matador base runner advanced to second on a bad pickoff attempt and then got to third on a passed ball. Another walked and then ran straight to second base – a classic little league play.

This put CSUN third baseman Nolan Bumstead in a position to notch a single that scored two. Bumstead himself advanced to second on an error by Bruin sophomore center fielder Daniel Amaral, and would score on a single during the next play. At the end of the inning, UCLA trailed 6-3.

“Those are careless errors, and we haven’t done that really this year,” Savage said. “Today we had two mistakes and it ended up being costly.”

Savage added that defense is one of the strengths on his team, and that Matador Field is one of the most offensive ballparks in Southern California due to a hard surface and consistent winds.

Junior first baseman Sean Bouchard responded with a two-run home run in the top of seventh, but that was the last time UCLA would score.

“To walk away with five runs in that park is disappointing,” Savage said.

Before the sixth, the Bruins were in good shape. Sophomore lefty Justin Hooper fired five wild but effective innings, allowing two runs on three hits with three wild pitches, exiting the game in line for the win.

The Bruins scored twice in the second. Redshirt sophomore shortstop Nick Valaika doubled, freshman second baseman Chase Strumpf walked and a double steal put them both in scoring position. Freshman third baseman Ryan Kreidler followed up with a one-out, two-RBI single up the middle that put UCLA up 2-0.

Each team added a run in the fifth inning.

With freshman catcher Will McInerny on third, senior left fielder Brett Stephens hit a deep fly ball into foul ground, but the CSUN outfielder opted to make the catch. McInerny scored on the play, giving UCLA a 3-1 advantage in the fifth.

Hooper gave up a solo shot to CSUN catcher Albee Weiss in the bottom of the inning, but retired the other three he faced in the inning.

“There wasn’t a whole lot of guys on base when (Hooper) pitched, and that’s always a good sign,” Savage said. “Unfortunately we gave up four in the sixth, and that really was the difference in the game.”

The Bruins will play an exhibition game against Korea Professional Baseball’s NC Dinos on Wednesday before the Dodger Stadium College Baseball Classic starts this weekend.