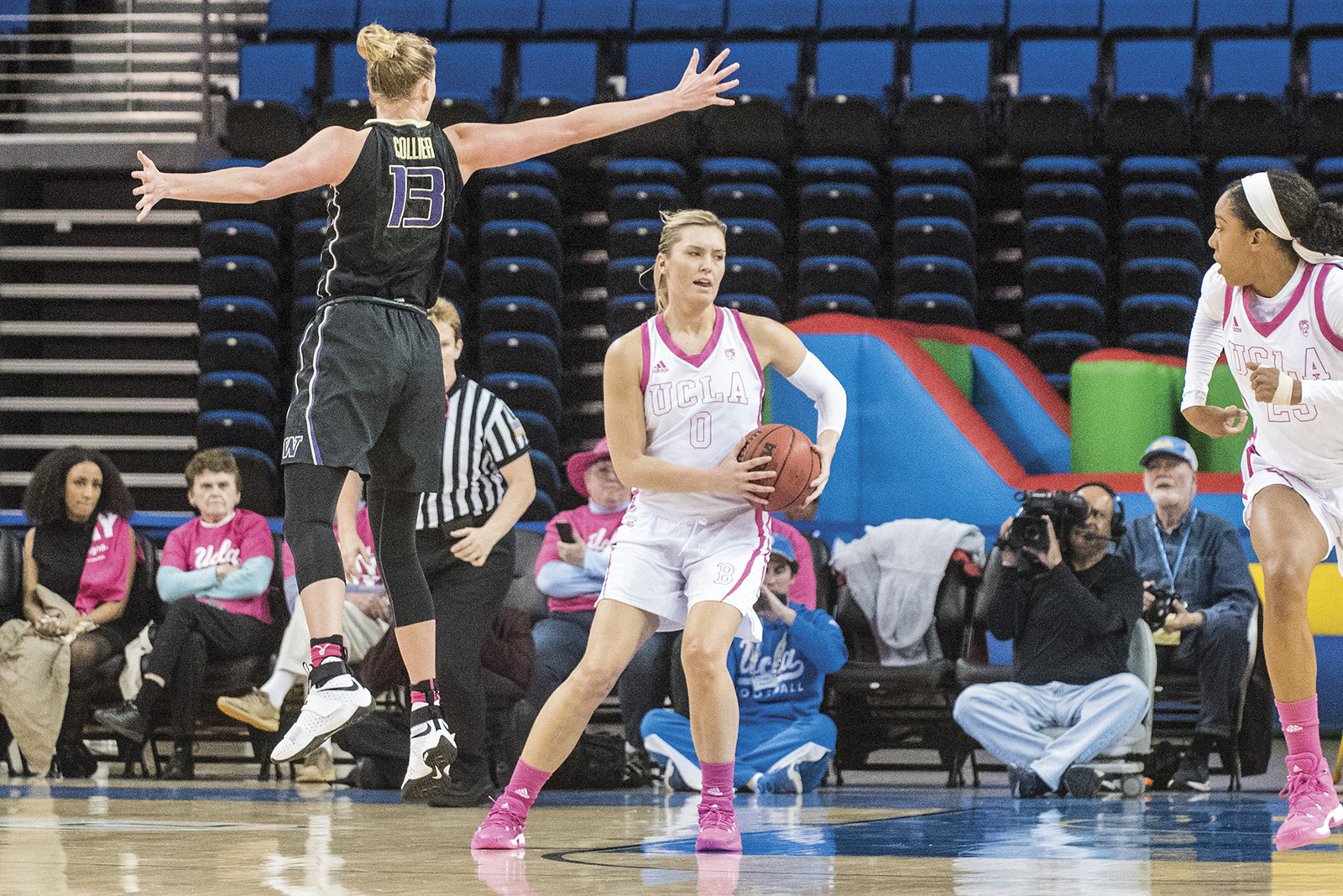 Against the Wildcats, junior guard Jordin Canada went off for 21 points on 8-of-13 shooting and had four steals, but she wasn’t the only highlight of the night for the Bruins.

Kornet had the biggest game of her collegiate career, pouring in a career-high 21 points on 6-of-12 shooting while pulling in 11 rebounds in just 25 minutes.

The redshirt senior guard credited her work on the glass as the key that eventually unlocked her offensive game.

“When you rebound, get putbacks and get to the line, it makes everything easier,” Kornet said. “Shootingwise, I actually didn’t start off too hot, but I found my touch later in the game and I think getting boards and being scrappy is what helps me a lot.”

Kornet began the season as the Bruins’ starting two guard, but has since been moved into the sixth-man role due to the insertion of senior guard Kari Korver into the starting five.

“At this point of the season you embrace your role and you own it,” Kornet said. “I’ve embraced it, and I’ve learned to love it.”

Coach Cori Close has been searching for consistent play from players other than Canada and junior forward Monique Billings, and Kornet contributed her first career double-double.

On a night the Bruins owned, the Wildcats did have one bright spot, forward LaBrittney Jones. Jones stands at just 6 feet 1 inch tall but didn’t struggle to hang with UCLA’s taller bigs. She scored 26 points on 10-of-17 shooting to go along with seven rebounds.

“She works really hard, credit to her,” Billings said. “She’s a great player and she stays very active, so you can’t get caught sleeping on her.”

In Sunday’s contest against the Sun Devils, both squads struggled offensively. UCLA shot just 33 percent from the field compared to Arizona State’s 39 percent.

For the Bruins, another unsung hero would lead the way. Burke led UCLA in scoring and rebounding, finishing with 16 points on 7-of-12 shooting and nine rebounds in 36 minutes.

Burke’s contributions were vital after both Billings and Canada were slow to find an offensive rhythm. Canada finished 3-of-13 from the field and Billings shot just 1-of-9, finishing with a season-low four points.

“Mo was kind of struggling so it was a team effort for all of us to crash the boards,” Burke said. “We were trying to be patient on the offensive end, because in the first half we were rushing, so in the second half we really improved on being patient with the ball, finding each other in the paint, drawing fouls and all that.”

After the win Friday night guaranteed UCLA the No. 4 seed in the upcoming Pac-12 tournament and a first-round bye, the Bruins learned that they will play the winner of the Utah Utes and the Arizona State Sun Devils in the second round.

Burke feels like the Bruins match up better against one team in particular.

“I would say Arizona State,” Burke said. ”Obviously they’re a great rebounding team, but so are we so I think we match up really well with them.”

Questions about Jordin Canada’s health are still a concern as well. She suffered a whiplash injury against Oregon State two weeks ago but says she is feeling better.

“It’s feeling pretty decent. There is still some soreness, but not so much pain, which is a good thing,” Canada said. “I’m just continuing to get rehab on it, making sure that it stays as soreness and nothing more.”