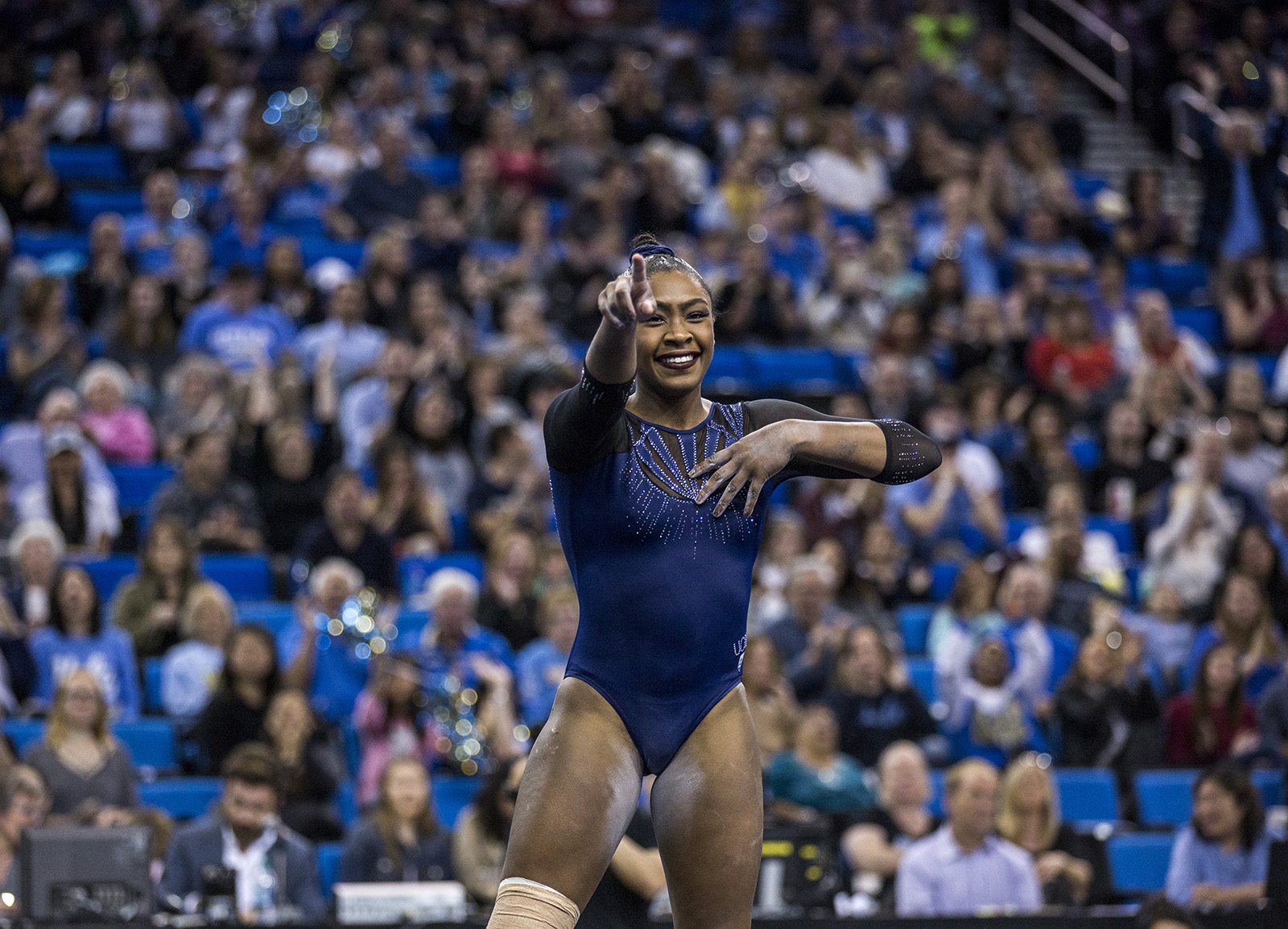 Senior Hallie Mossett capped off UCLA gymnastics’ meet Saturday by recording a 9.975 on the floor exercise. The score marks a career-best for Mossett, as the Bruins also finished with a season-high 49.625 on floor. (Keila Mayberry/Daily Bruin staff)

Senior Hallie Mossett danced across the floor in her Beyoncé-inspired routine. She already stuck the landing on her first tumbling pass and lined up to close the meet with another well-executed round of tumbling.

She flew into it and stuck the landing again. Her teammates crowded her, anticipating a 10.

[Related: UCLA gymnastics aims to leap back into action after lackluster performance]

“I’m really, really happy with my floor routine, definitely the best one that I’ve done,” Mossett said. “The other routines I’ve done this season, I usually step forward on one pass or the other, so I was happy that I could pull myself together before this routine and feel sort of calm with myself and confidence that I got it.”

Despite the positive performance, coach Valorie Kondos Field felt the team was missing something.

“Honestly, I thought we were a bit flat,” Kondos Field said. “I think that they did really well controlling their energy, making sure their bodies went where they wanted their bodies to go, but I just felt we were a little flat. It’s nice to be able to score this well and be this consistent without having that extra something that takes you from that 9.9 to a 10.”

The Bruins’ display on vault also left something to be desired. Whereas the other three events had strong routines and multiple scores in the 9.9-or-higher range, every gymnast in the vault lineup posted a score in the 9.8s.

No one turned in a spectacular score, but unlike Monday, no one fell.

As a result, the team stayed true to its current form in the event, in which scores hover around 49.2, and collected a 49.175 team score.

“49.2 is probably on the lower side of most of our meets,” said freshman Madison Kocian. “I think we need to find all of those landings right now. The meet we got a 198, we got a lot higher and had multiple stuck landings.”

On the opposite end of the scoring spectrum, UCLA snatched a season-best 49.625 on floor exercise, a stark contrast from Monday’s season-worst 48.

Rest, according to Kondos Field, played a big part in the day’s successes, as the Bruins only had one day of training during the week.

“Rest was a huge part of this because we had three meets in seven days,” Kondos Field said. “Our No. 1 goal was to heal them and get them as much time as their muscles needed to rejuvenate and heal.”