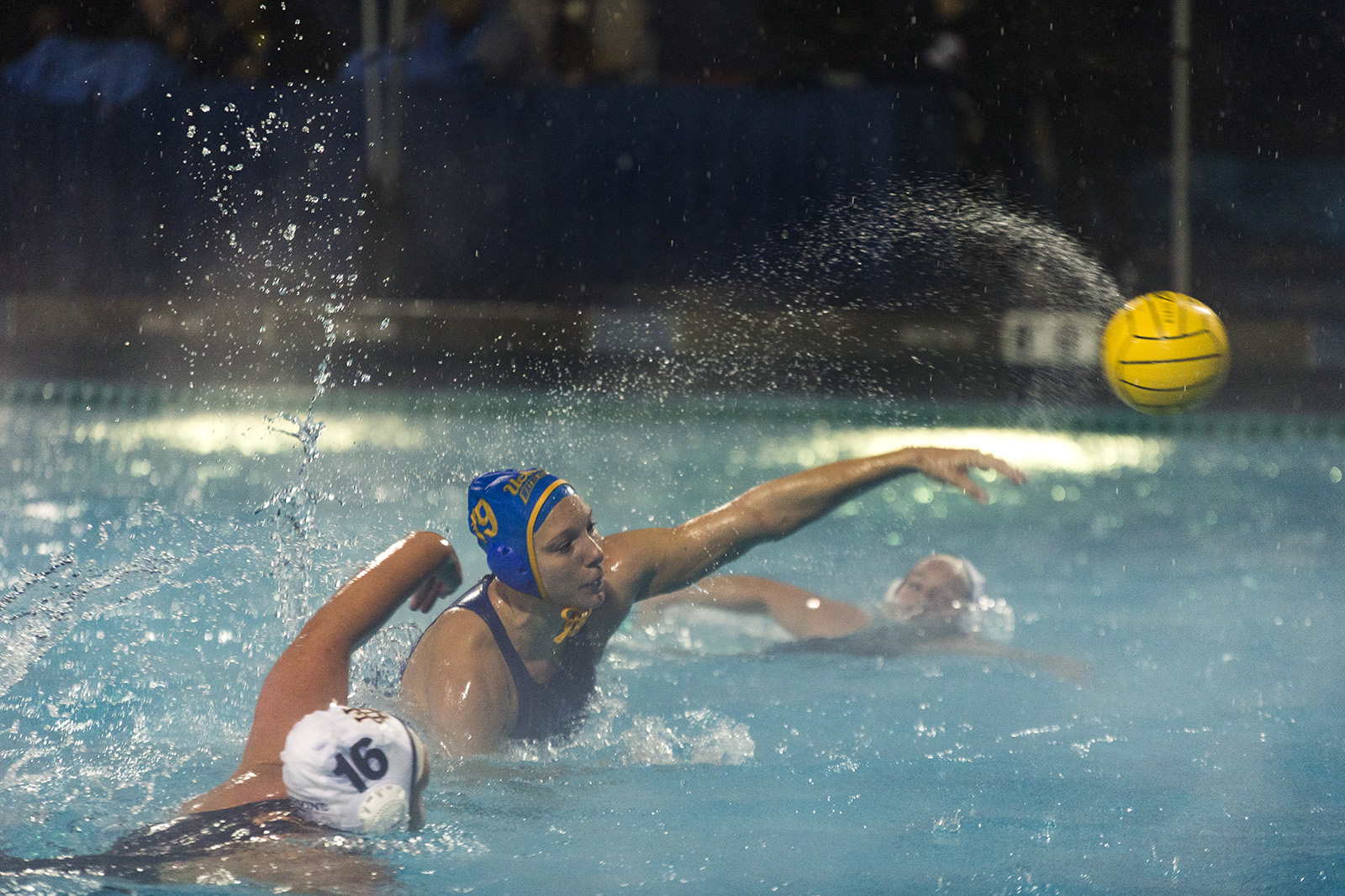 Sophomore attacker Lizette Rozeboom had a hat trick in Friday’s home opener against No. 6 UC Irvine. She and the rest of the No. 3 UCLA women’s water polo team will be traveling to Anteater territory this weekend for the Barbara Kalbus Invitational. (Aubrey Yeo/Daily Bruin senior staff)

Women’s water polo coach Brandon Brooks said that the Mountain Pacific Sports Federation conference championship is the most competitive tournament of the year.

“The depth there is unmatched,” Brooks said.

That’s still months away, but he added that nearly all of the teams that will be there will also descend on the tournament UCLA is going to this weekend.

Beyond the Barbara Kalbus Invitational being the first major tournament of the season for the No. 3 Bruins (8-0), it will also feature the nation’s top competitors at their most concentrated thus far this year.

UCLA will be one of nine teams competing in Irvine that are ranked in the top 10.

“All the best teams are there,” Brooks said. “This is our big championship-format tournament thus far in the year – it’s definitely going to be very competitive.”

Under Brooks’ eight-year tenure, the Bruins have made it to at least the third-place game in every Irvine invitational, but have only captured the tournament title twice.

“This is our first time we’ll be having a chance to match up with some of the other top four teams right now,” said sophomore defender Rachel Whitelegge. “So I think our ultimate goal is to go and dominate everybody in the tournament.”

The Bruins will play their first game against No. 16 UC San Diego (4-5) on Friday afternoon, with their three remaining games all depending on the results of other teams in the tournament.

There’s a good chance, however, that UCLA will face at least one of this year’s top two teams. The team has faced either No. 1 Stanford or No. 2 USC in the Irvine tournament each year since Brooks started, sometimes facing both.

The Bruins haven’t faced the Trojans this year but scrimmaged the Cardinal back in mid-January. Though UCLA tried out different rotations in the unofficial match, Stanford finished 8-for-11 when the Bruins were down a player on defense.

Sophomore attacker Lizette Rozeboom, who scored three goals in Friday’s home opener against No. 6 UC Irvine (7-4), said the team has been working on not just man-down defense but defense as a whole for a while now.

“We’ve been working on different types of defenses, and we’ve also been working on every single position as an individual,” Rozeboom said. “I feel like now that we all know what to do, it will be a lot easier to hold them down to a lot less goals.”

Of late, UCLA’s 5-on-6 defense has been nearly lights-out. Whitelegge said that she thinks the team as a whole has been limiting man-down scores to about 8 percent, and Friday, the Bruins held the Anteaters scoreless in their eight man-down scenarios.

“Keeping teams to one or zero goals is ultimately the goal on those,” Whitelegge said. “I think we’ll be able to do that as long as we’re all on the same page and not a step behind.”

Now, at the onset of the heart of its season, UCLA’s been able to learn a decent amount about itself through its early-season games, according to Brooks.

The Bruins have yet to officially play any team ranked higher than them, but Whitelegge and others are eager to see how their new plays are going to pan out in the bigger games and bigger situations that will come this weekend.

“This weekend will tell us a lot more about ourselves,” Brooks said. “But yeah, we’re playing against all of the other best teams in the country, and we expect to try and get the best result.”