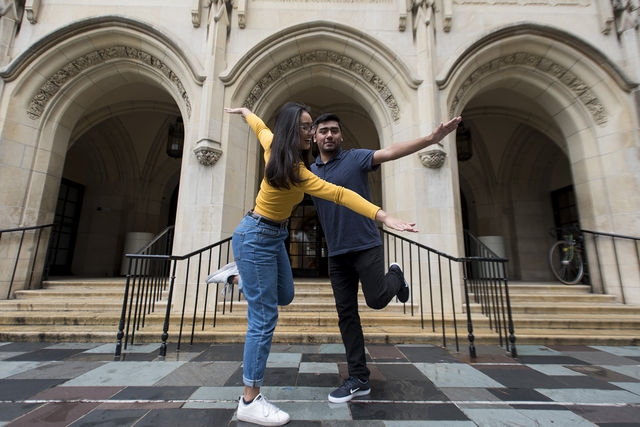 Ryan Gosling and Emma Stone aren’t the only ones who tap and waltz around the “City of Stars.”

In “La La Land,” aspiring actress Mia (Stone) and jazz pianist Sebastian (Gosling) are determined to pursue their dreams together while singing and dancing around Los Angeles.

3rd Street Dance, a dance studio in LA, celebrated the film by kicking off its “La La Land” workshops Saturday. The workshops started with a lesson in “A Lovely Night,” the dance number depicted on the film’s purple posters. Around 30 dancers of different ages and skill levels packed a pink-walled studio with windows that overlooked the cars zooming down 3rd Street by the Beverly Center.

For $20 per class or $59 for the whole four-week workshop series, movie fanatics can learn the film’s dance pieces including “City of Stars,” “Another Day of Sun” and “Someone in the Crowd.”

The workshop’s instructor, Larisa Bates, helped the cramped group of dancers navigate the dance number step by step. “A Lovely Night” involved an emphasis on footwork, as the film’s characters moved forward, backward and spin in a parking lot.

In all my years of dancing, I never thought I would hop and slide to the voices of Emma Stone and Ryan Gosling.

I joined the “La La Land” dance workshop hoping to learn the movements of the gorgeous Oscar-nominated musical and to acquire some snazzy party moves. I also wanted to expand my dance palette, which is comprised primarily of classical ballet.

First-year psychology student Daniela Rodriguez signed up for the workshop after her friend made her watch the film, which she enjoyed for its lively dances like “Another Day of Sun.”

After a little more than an hour of shuffling and turning in the cramped studio, the other participants and I learned one minute of the 1.5-minute routine on a very basic level.

The instructor flipped through a notebook marked with arrows, counts and step names to teach the class. Bates danced in front of the mass of students, prompting them to follow every step she took in her beige ballroom shoes. While calling out the steps, she reduced the dance moves into simple terms like tap and turn, with the occasional use of ballet jargon like rond and chaîné, which represent a circular leg sweep and quick turns, respectively.

“Five, six, seven, eight,” Bates yelled above the music, prepping the dancers for the opening four slow walks into a little hop onto the right foot.

Fancy footwork was the main focus of Saturday’s lesson. I’ve danced minute-long ballet pieces full of quick pirouettes and jumps, but even that did not prepare me for the fast-paced “A Lovely Night.”

While I understood most of the choreography, setting the sequence of movements in order to the fast and upbeat music was challenging. I caught myself miscounting the number of walks and switching my foot placement to match Bates. The ballet moves, including quick turns and picturesque high kicks, were my favorite steps. However, the unfamiliar tap-inspired movements, like the traveling heel pivot in which the foot turns out on its heel, were the moves that left me smiling.

The group split into two subgroups, allowing the dancers more space to perform the steps. The space, however, was still not enough for me to execute the steps as grandly as the actors – I occasionally bumped into my peers.

After a round of rapid spins comes a high kick, which I couldn’t perform due to my concern of kicking those around me.

The overall workshop experience, despite the lack of sufficient time and space, was enjoyable for film fanatics or dancers willing to try new styles. I stumbled trying to perform the correct step on the right count, but learning and perfecting such a fast-paced piece would not be complete without some slippages.

The workshop reminded me the film’s scene was the final product of hours of rehearsal, allowing me to appreciate the stars’ hard work even more. The workshop allowed me to feel like Stone rehearsing the piece for the very first time.

But learning the number by watching YouTube and practicing on my own time would have been a better alternative to squeezing into a studio with 30 other people for an hour.

The fancy, synchronized footwork of “La La Land” choreography didn’t look too difficult until I tried learning it.

I am a bigger fan of the movie’s singing and dance sequences than the plot itself, which I felt was a bit dull and cheesy.

I practiced the dance’s more complex turns and kicks in the small studio east of Beverly Hills, but even the truncated version made me nervous. To my relief, everyone else in the workshop looked like they were struggling as well.

My prior dance experience consisted of Latin genres such as merengue, ranchera and Mexican pop. The class is meant for people of all experience levels, though some people will definitely have a harder time keeping up than others.

Watching the movie and knowing how successful it has been heightened the novelty of the dance moves for me. Bates started the lesson by breaking up the group into pairs – I played the film’s Sebastian to my partner’s Mia, who was more experienced than I and kept improving as the hour went by.

The dance starts off simple: four steps forward and four steps back; we turn left and move side to side. From there, we had to practice a series of turns and foot movements, known as ronds.

What made the dance more difficult is the song’s quick tempo.I found myself speeding up my footwork to get back in sync with the song.

However, Sebastian’s part was less complicated than Mia’s in that it required fewer steps – at one point, the guys had to stand and wait while the women did a series of turns. The second half of the song was more complicated for me, as it involved fast-paced turns and the moves were hard to memorize in a short period of time.

I hoped we would have gone over the sequence more in depth.

Maya Bakir, a first-year cognitive science student, said she thought the lesson was too fast-paced and too short for beginners.

However, Bakir did learn to appreciate “La La Land” more after learning the steps to the movie’s most famous scene. It was Bakir’s first dance lesson; she only casually danced jazz when she was young.

“It gave me a good perspective about how good the choreography was,” Bakir said.

The quick lesson motivated me to learn the moves quicker and pack more into the lesson.

Even though I’m not the biggest fan of “La La Land,” learning the dance moves made me appreciate the movie’s choreography. The short hour, though, left me feeling unsatisfied.