Gymnastics teeters but wins tri-meet against Bridgeport and Utah State 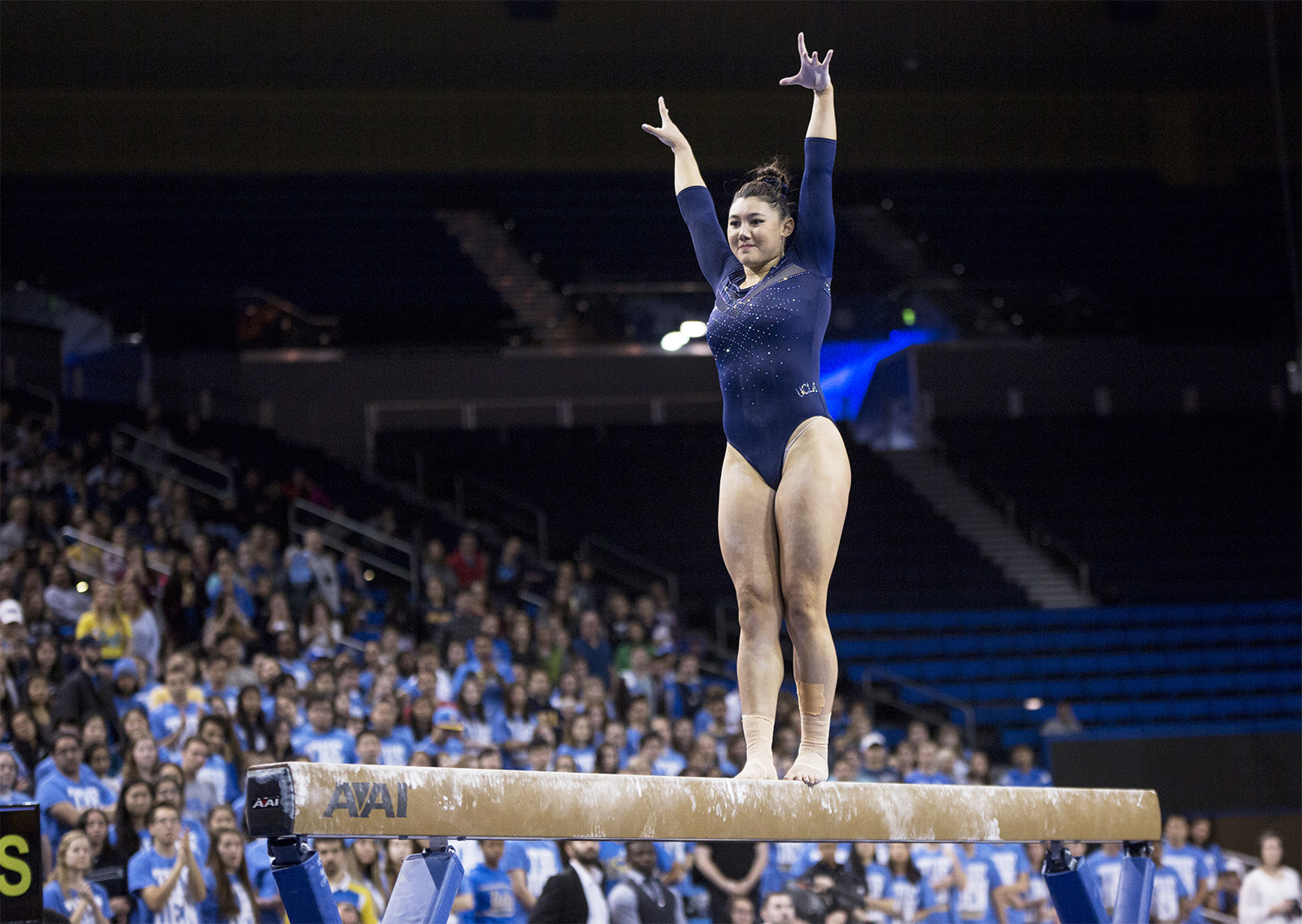 Freshman Kyla Ross scored a perfect 10 for the second meet in a row, this time coming on the balance beam. Her two previous perfect scores both came on the uneven bars. (Keila Mayberry/Daily Bruin staff)

Before UCLA gymnastics competed in Monday’s tri-meet against Bridgeport and Utah State, freshman Kyla Ross had two 10.0 routines under her belt. Both were on the uneven bars and both happened on the road.

After nabbing her second in Salt Lake City on Saturday, Ross established another target for herself. She wanted to get one at home.

[Related: UCLA earns highest away score in loss to Utah]

Two days later, she made that goal a reality on the balance beam.

“I knew before my dismount it was solid routine, so all I had to do was stick the dismount,” Ross said. “When I did, I was so excited. It was great to get at home in front of my friends and family and all the fans at Pauley (Pavilion).”

Now, she can claim a perfect 10 in two events.

“For her to earn a 10.0 on an event besides bars was so great,” said coach Valorie Kondos Field. “It was just awesome.”

No. 4 UCLA gymnastics (5-2, 3-1 Pac-12) beat Bridgeport and Utah State partially on the strength of Ross’ third perfect 10 of the season, but it did so by a narrow margin.

But even after two meets in three days, Kondos Field refused to blame the low score on fatigue.

“They’re not tired,” Kondos Field said. “We’re not using that excuse, at all.”

Whatever the case, UCLA failed to be consistent in their routines. The gymnasts either nabbed big scores or failed to stay on their feet.

Ross’ 10.0 exemplified the positive side of the performance.

So did redshirt freshman Macy Toronjo’s 9.9 on floor exercise during her competitive debut as a Bruin. Following sophomore Katelyn Ohashi’s 9.9, Toronjo helped energize the entire arena.

“I haven’t competed floor since (Women’s Junior Olympic National Championships), so it’s been a little over a year, but I love competing floor,” Toronjo said. “I felt so ready. I’ve been working really hard in the gym trying to build up stamina.”

Her efforts may have landed her a more permanent spot in the floor rotation.

“Macy got an opportunity on floor, and she killed it,” Kondos Field said. “She’s in the lineup. Someone’s coming out.”

Freshman Gracie Kramer’s falls on vault and floor epitomized the low end of UCLA’s Monday display and pointed out the chasm between the good and the bad.

“It’s the same thing. Gracie Kramer got an opportunity,” Kondos Field said. “She’s been hitting that routine in training, so I don’t know when her next opportunity is going to come, but she needs to be ready when it does.”

For the remainder of the regular season, the Bruins will not have to contend with such a quick turnaround on the schedule. They had two meets in one weekend, including a chaotic road trip to Utah.

After an up-and-down performance on all four events, consistency is UCLA’s paramount focus from here to its last meet.

“We need to work on our consistency,” Kondos Field said. “We’re past midseason now and whoever is consistent will be competing. We are no longer going to be playing with the lineup.”