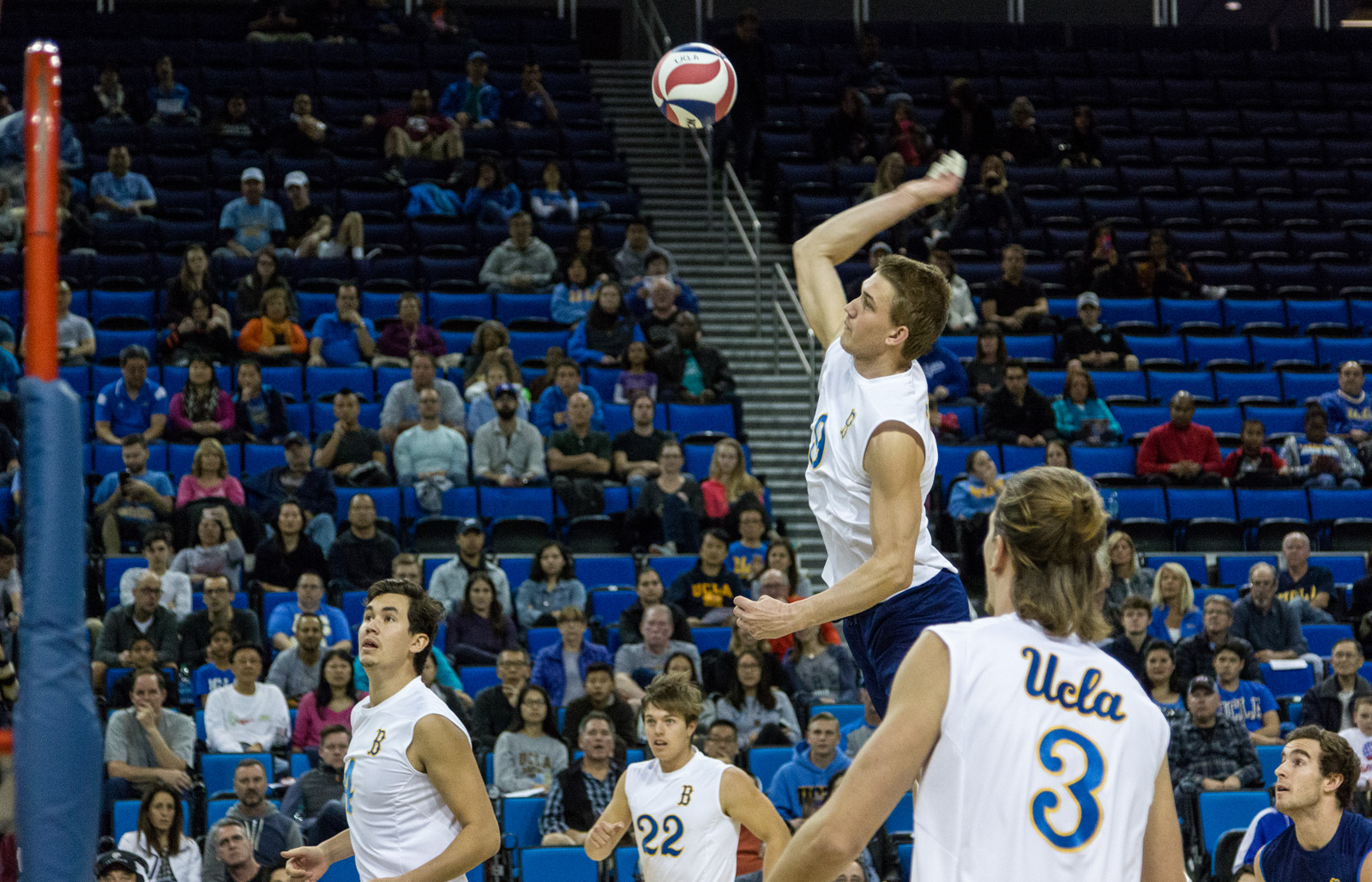 Junior outside hitter JT Hatch led the Bruins with a season-high 24 kills during their five-set victory over the Pepperdine Waves on Saturday evening. (Amy Dixon/Daily Bruin)

The first four sets on Saturday brought memories of UCLA men’s volleyball’s three consecutive losses, but the Bruins finally got back on track in the fifth.

The Bruins only hit .252 on the match, but posted a hitting percentage of .600 in the decisive fifth set.

“That fifth set was really what we needed to be at the whole time,” said junior outside hitter JT Hatch, “We played point by point and we fought hard. … Hopefully that sets a standard.”

Outside hitter Jake Arnitz was still sidelined due to a foot injury, and coach John Speraw said that the junior’s absence requires more offensive production from his other hitters. Hatch stepped up against the Waves and posted a season-high 24 kills and 16 digs, leading all players in both categories.

“JT may not get as much attempts when Arnitz is on the floor, but now he’s got to kill the ball for us more frequently,” Speraw said. “That puts more pressure on him and forces him to be better at what he does.”

Senior middle blocker Mitch Stahl returned for his second match since missing last week with an abdominal injury. Stahl was second on the team with 11 errorless kills, but his major contribution came from the serving line. Speraw said that Stahl consistently served tough and gave the team a lot of opportunities by making 85 percent of his serves.

While UCLA came out on top in the end, the first four sets of the match were far from perfect. Speraw said that his team did not attack well in the two sets that it lost – the Bruins hit .114 in the first and .094 in the third.

Stahl said that the match was a good learning experience for the team and will help to give UCLA some confidence after a tough week.

“We learned a lot about ourselves this match,” Stahl said. “I think some guys who were struggling in recent matches got a lot of confidence. The thing we need to really be careful of is toeing the line of confidence and cockiness because we went to the final four last year, and that’s kind of the expectation of everyone around us, including our team.”

Speraw said that the middle of the season is always tough, especially with the Bruins’ current injuries, but he feels good about his team and his players’ improvement through the season.

“We’re only going to get better if we’re pressured, and right now we’re under quite a bit of pressure,” Speraw said.