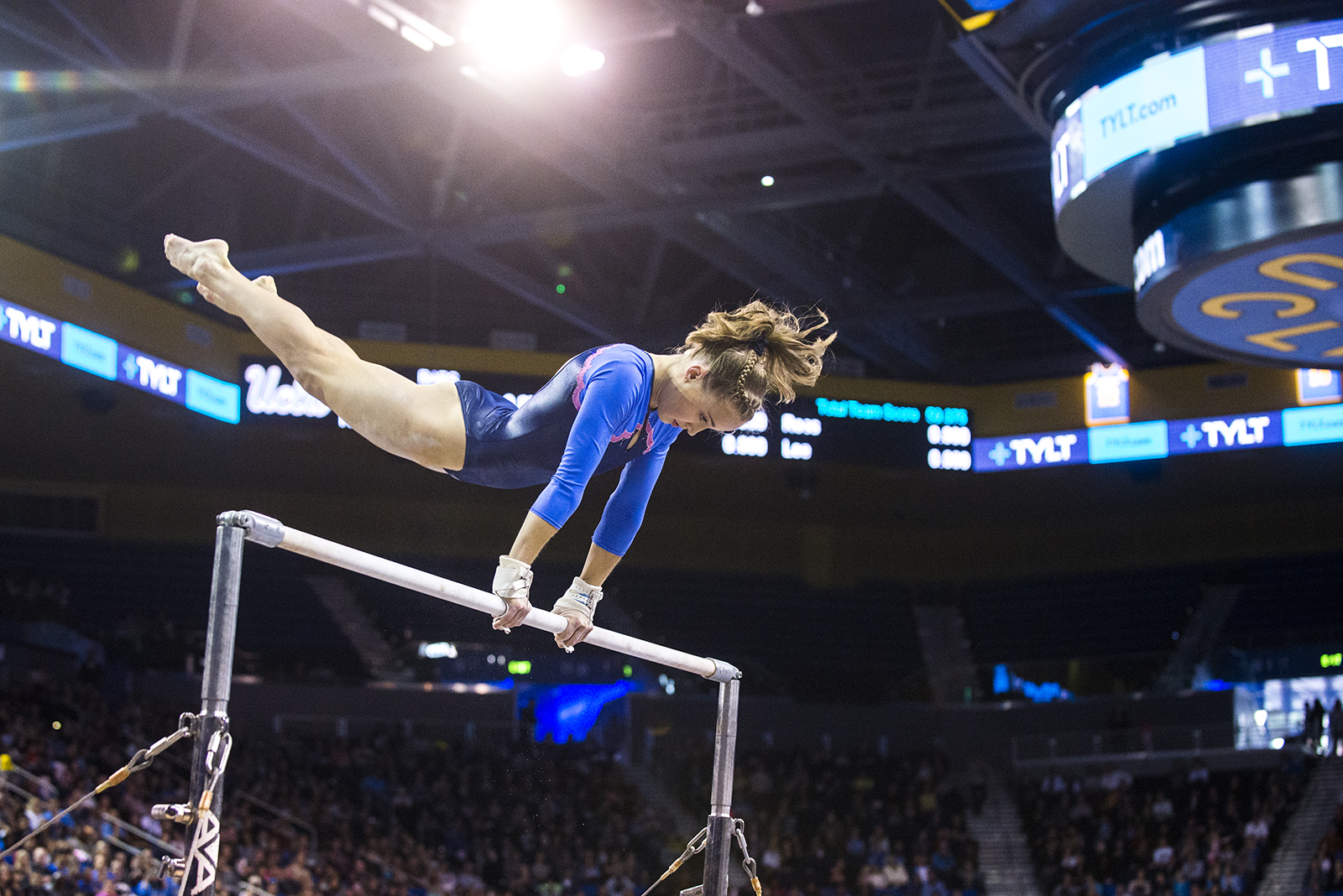 Freshman Madison Kocian, a co-world champion on the uneven bars, scored her first perfect 10 on the event en route to winning the all-around for the fourth time this season. (Angie Wang/Daily Bruin senior staff)

Four season-high scores, three perfect routines and two 10s later, the Bruins capped off the meet against the Stanford Cardinal by setting a new national standard.

“I keep saying we’re right on track,” said coach Valorie Kondos Field. “It’s awesome to have the highest score in the country, but it’s more awesome that we did this well and still have room to grow.”

The meet’s defining moment didn’t come when the team recognized it broke the 198 threshold for the first time since 2012, but during the second half of the uneven bars rotation.

Freshman Madison Kocian, following three successful routines, stepped up on the apparatus that sent her to the Rio Olympics. She flew from bar to bar, catching every single handstand, and finished the routine by sticking the dismount.

Moments later, the judges revealed the score – 10. It was the first of Kocian’s collegiate career.

“For me, it was a whirlwind of emotions,” Kocian said. “I thought I was going to cry, but I was so excited inside. I couldn’t stop smiling.”

After the celebrations died down, freshman Kyla Ross took her turn. She was clean and finished the job with a stuck landing.

This time, however, the judges found a flaw and awarded Ross a 9.975.

Redshirt senior Peng-Peng Lee was UCLA’s anchor on the uneven bars. She zipped through her livewire routine, hitting all the scoring elements along the way, and stuck the landing.

At this point, the crowd was up again cheering loudly and lobbying for a 10 along with the team.

“That was a basketball crowd,” Kondos Field said. “That was amazing.”

Once more, the judges gave them what they wanted – a perfect 10, Lee’s first.

“You’re always working in the gym to get that perfect 10,” Lee said. “Just to finally put it on my resume is amazing.”

The Bruins’ 49.725 score on bars was a season-high and ranks third on the school’s all-time bars scores.

Sophomore Madison Preston returned from an injury to grab a career-high 9.95 on vault, while senior Angi Cipra put up a 9.825 on her first floor routine of the season.

Their routines, along with solid displays from the other specialists, helped UCLA notch season-highs in every event, rounding out an energetic and entertaining performance.

“We’ve been waiting for that breakthrough weekend,” Kocian said. “I knew from the beginning of the season we could get a 198 because we have so much talent. It was just a matter of putting everything together. I think this a perfect time for us to start breaking through.”