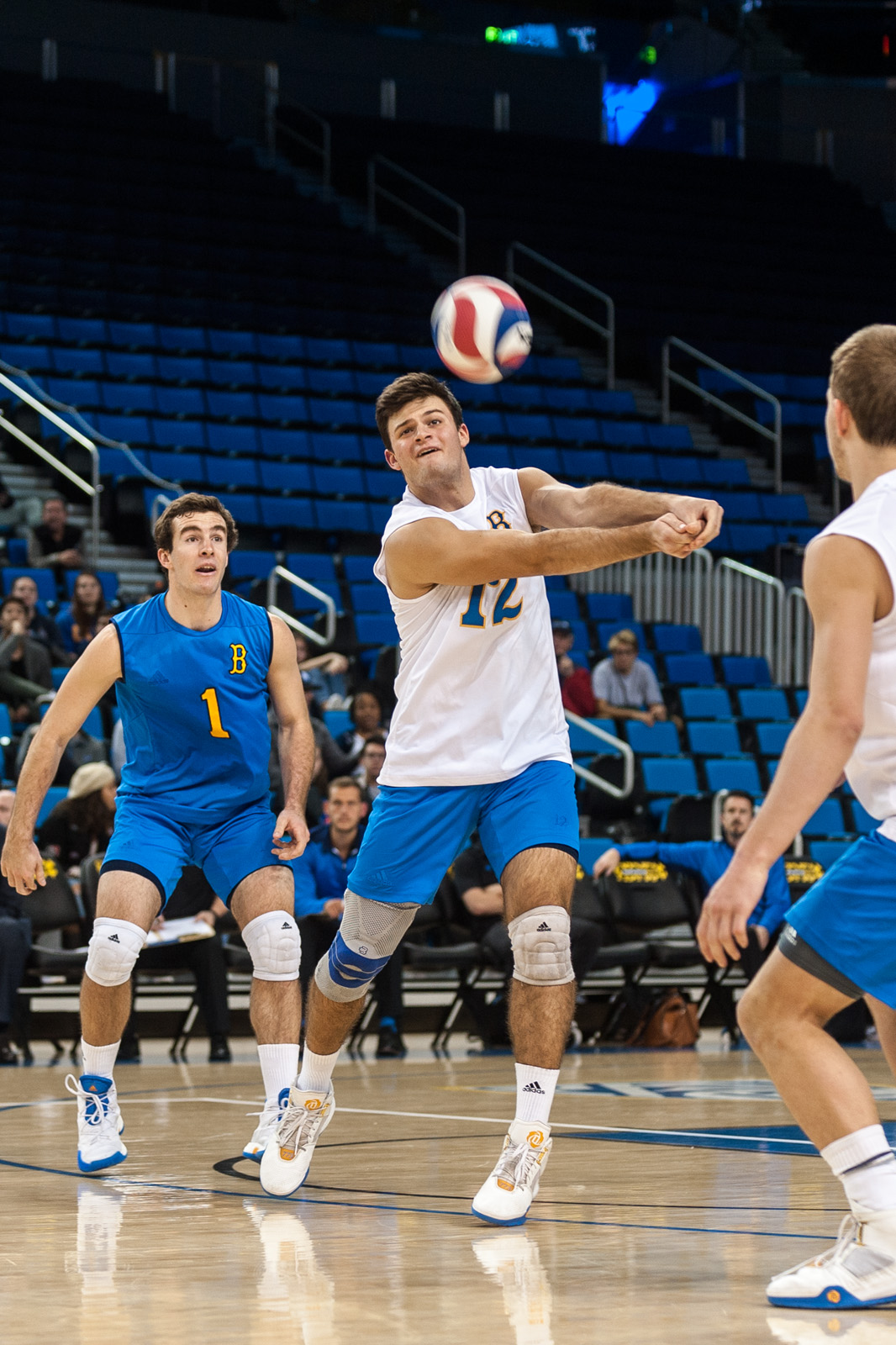 After both teams suffered losses last weekend, UCLA and Stanford men’s volleyball headed into their match Thursday looking to get their seasons back on the right track.

In the end, it was the Cardinal that powered through to claim the win.

“It was a quick turnaround. We got back late Sunday night and left Wednesday morning,” said junior outside hitter JT Hatch. “But we were excited to just get back out on the court and play after two losses in Provo.”

The injury-ridden Bruins couldn’t top No. 3 BYU on back-to-back occasions on the road, while the Cardinal fell to No. 13 Cal State Northridge and No. 2 Long Beach State in straight sets.

The Bruins jumped ahead early and were the first to double digits in set one, but saw the Cardinal narrowing the deficit to make it a one-point game, 20-19.

Sophomore outside hitter Dylan Missry put up a big stuff block to put the Bruins up 22-20, but the Cardinal got their offense rolling to tie things back up at 26. Freshman middle blocker Daenan Gyimah was stuff-blocked by Kevin Rakestraw, giving Stanford the first set, 29-27.

“The gym wasn’t very full, and it was kind of quiet. It was tough to get the momentum going,” Hatch said. “It was more on our side. We didn’t take care of the ball as well as we should have, and we served really poorly.”

The Cardinal rode their momentum into set two to take an early lead. UCLA wasn’t willing to let Stanford claim control of a consecutive set, answering with a kill from Missry to give them the equalizer 27-25.

The two teams were neck and neck at the beginning of set three, with neither able to make a run. The Cardinal kept the pressure on, tying the set at 20 and again at 23, but senior setter Hagen Smith and senior middle blocker Mitch Stahl came up with a huge block to end the set 25-23.

Jordan Ewert and Mason Tufuga led Stanford with 22 and 19 kills, respectively, and were eventually able to take set four 29-27. The final set also swung in favor of the home team, as they finished off the match 15-11.

“There were a couple guys who we really did not have an answer to, and we should’ve had an answer to,” Missry said. “We did not do one thing exceptionally. Nothing was good enough to win a match.”

Hatch led the Bruins offensively with 19 kills, followed by Missry’s 13. The Bruins failed to execute from the service line, finishing the match with a devastating 29 service errors.

“We really served the ball so poorly,” said coach John Speraw. “You’re just not going to beat many teams when you don’t put enough pressure on them.”

Stahl was back on the court Thursday after sitting both games out against the Cougars. The veteran middle finished with nine kills and three blocks.

“I think he looked fresh and I thought he played as well as you could’ve expected, considering he took as much as time off as he did,” Speraw said. “We’ve been relying on him to win sets with his serve and we couldn’t do that tonight. We’re going to have to have other people do it, and if not, we’re going to have a lot more losses like this.”