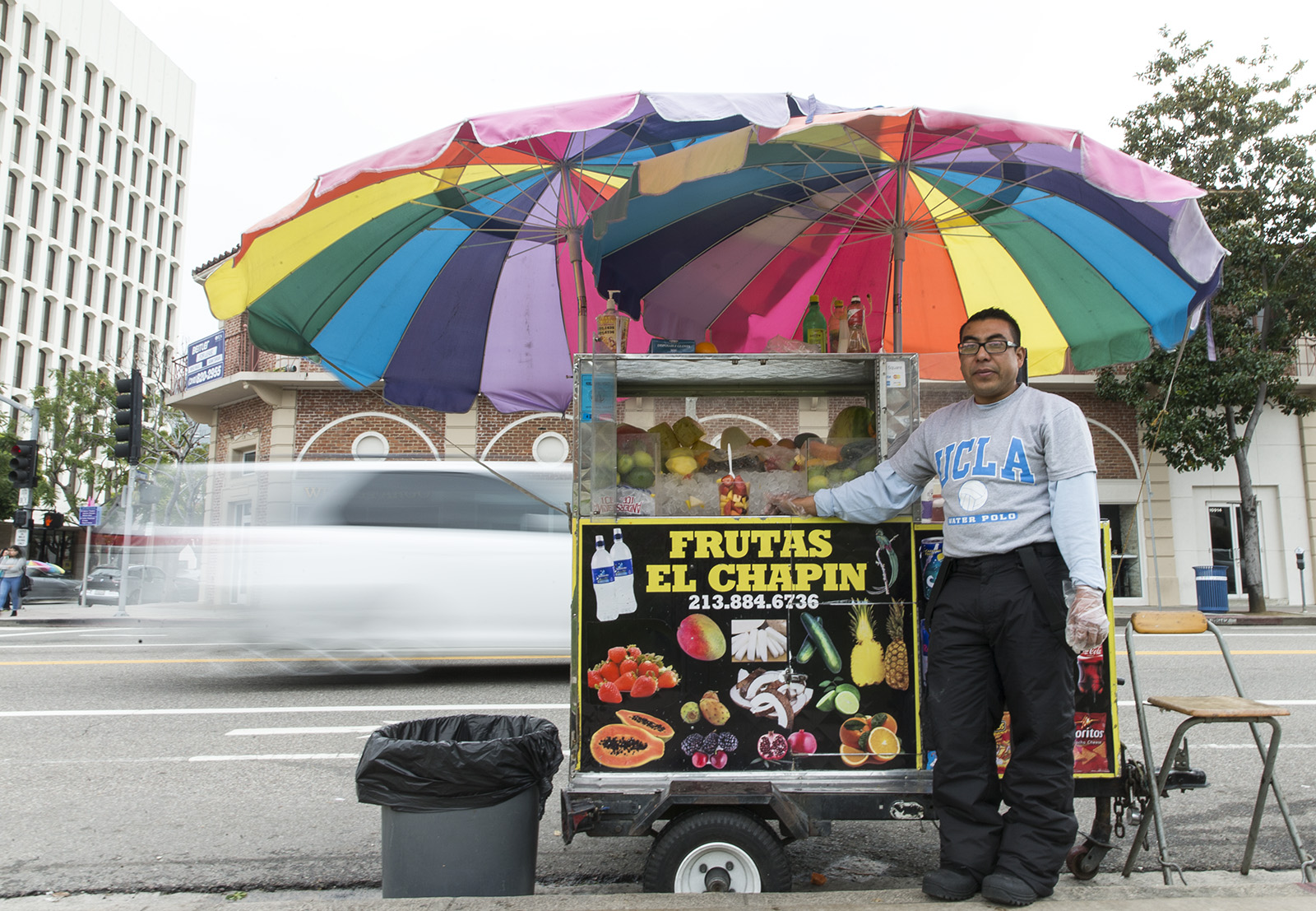 Freddy Augustin runs a fruit cart at the corner of Westwood Boulevard and Le Conte Avenue. He said he thinks his business would improve if street vending were decriminalized. (Aubrey Yeo/Daily Bruin senior staff)

The Los Angeles City Council is planning to decriminalize and regulate street vending to protect LA’s immigrant population from being deported.

The council is trying to shield street vendors from President Donald Trump’s executive order, which would deport immigrants with minor crimes or a perceived history of criminal acts, according to the Los Angeles Times. The current street vendor law cites people who sell food or merchandise on city sidewalks with misdemeanors, which could lead to deportations for immigrant vendors.

The new law will soon authorize the city to issue permits to vendors and revoke criminal penalties for selling on city sidewalks.

Officials said the city could take months to finalize the details of the new law. Until then, street vendors could be cited and fined, but not convicted of a crime.

Freddy Agustin, who runs a fruit cart at the corner of Le Conte Avenue and Westwood Boulevard, said he thinks decriminalizing street vending would improve his business. He said he gets the most business when he is more accessible, and the change would help with that.

Agustin said business is good for the most part and his Westwood customers are friendly. He said he thinks it is his positive attitude that maintains business with local residents.

“This job is the best,” he said. “This place is my paradise.”

Some Westwood officials were skeptical about decriminalizing street vending and said the new law would hurt business in the area.

Lisa Chapman, president of the Westwood Neighborhood Council, said the council decided in 2015 it did not want vendors in Westwood because they took customers away from local businesses.

Chapman added that street vending laws rarely get enforced in the Village because Los Angeles does not appropriate many funds to enforce it.

“Westwood has already suffered enough with trying to come back and become a vibrant place again and I just see (street vendors) as a deterrent to that,” she said.

Westwood businesses are required to provide bathrooms for employees and pay for utilities and property, sales and city taxes. Chapman said street vendors would not have to pay any of these additional costs and would only be responsible for the cost of a single permit to operate.

“They don’t have to absorb any of these other costs that it takes to run a business and it seems like it’s really unfair competition,” she said.

Andrew Thomas, executive director of the Westwood Village Improvement Association, said he was not in favor of a policy for the whole city, and would prefer that each Los Angeles neighborhood decide whether or not to allow street vending.

He said there were unanswered questions about where vendors could be located, what kinds of goods they can sell and who would monitor their activity.

However, Thomas said he thinks some communities in Los Angeles could benefit from street vendors.

“I don’t know that we have a need for additional vendors here on the sidewalk,” Thomas said. “But I think there’s some communities where there’s really an absence of retail or an absence of food that would probably be served by sidewalk vending.”

Laura Winikow, treasurer and educational community director of the Westwood Neighborhood Council, said she supports street vending in the Village because the unique food typically offered by vendors draws in visitors and potential customers for other businesses.

She said she believes vendors do not steal business because they sell food prepared in a way that is not available in other Westwood businesses.

“I just think Westwood is very short-sighted to protect (brick-and-mortar stores) so much that we prevent people coming in,” Winikow said. “(Street vending) is a great draw for people.”

Winikow added she thinks Trump’s executive order has transformed street vending into a human rights issue. She said she believes someone’s livelihood should not be destroyed just because they peddle things people enjoy.

“You cannot say our fruit guys should be thrown in jail and then deport them,” she said. “You just can’t.”