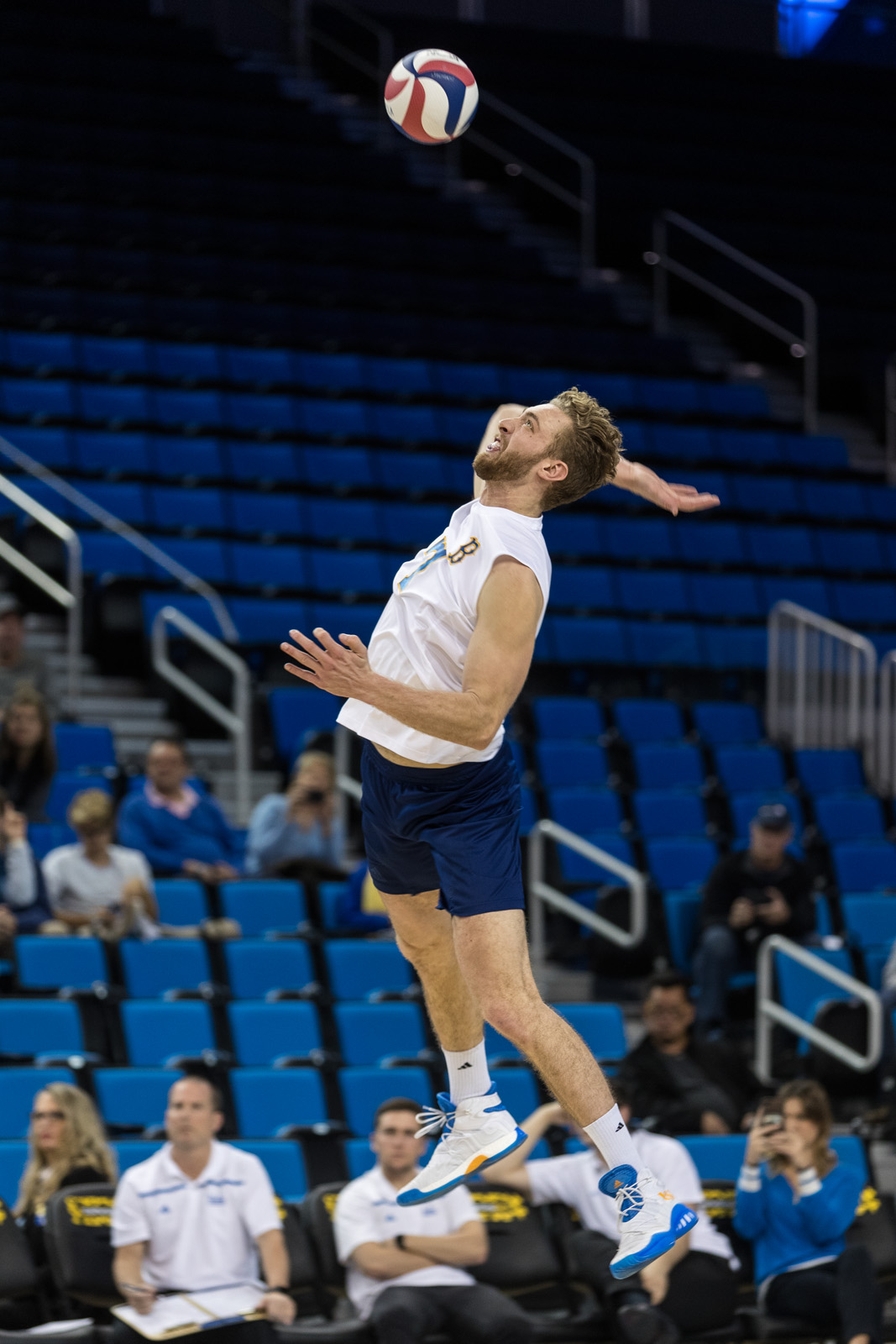 Senior middle blocker Mitch Stahl is No. 2 in rally-scoring era career aces with 105. Currently, Stahl is tied for the team lead in 2017 with 18 aces. Sophomore opposite/setter Micah Ma’a is the other Bruin with 18. (Hannah Ye/Daily Bruin senior staff)

With 67 service aces on the season, good for third in the nation, UCLA men’s volleyball is again proving that they are a serving team.

In terms of swinging from the back line, the No. 4 Bruins (9-3, 6-2 Mountain Pacific Sports Federation) are nearly doubling the output of their opponents, with 67 service aces for versus 39 against them.

Out of the 12 games that UCLA has played thus far, they’ve only been out-served in two, and the Bruins lost both games against powerhouses Ohio State and BYU.

[Related: No. 2 UCLA suffers two losses against No. 4 BYU]

The Bruins’ success can be attributed to their philosophy, which is basically the same from last year – swing away.

“It’s kind of the same, our team’s serving philosophy is to hit your best serve every time,” said senior middle blocker Mitch Stahl.

Stahl and sophomore opposite/setter Micah Ma’a lead the team with 18 aces each, while junior outside hitter JT Hatch follows with eight of his own.

Ma’a set a UCLA rally-scoring era record with 58 service aces during his freshman campaign, blowing past the previous record of 39.

“If you foul Steph Curry and let him see the ball go into the net, he’ll put 25 up on you real fast,” said BYU assistant coach Jaylen Reyes. “It’s the same with Micah’s serving. You want to get that kid off the line as soon as you possibly can because he can really hurt you.”

Meanwhile, Stahl moved into second place in the rally-scoring era career aces column with 105. The senior, however, has to notch 90 more aces this season in order to surpass Gonzalo Quiroga, the current No. 1 Bruin.

Despite the past success of UCLA’s serving game, Stahl believes that the team has improved this season.

“I think last year we weren’t consistent enough with getting that best serve in the court,” Stahl said. “Now, for myself, I’ve found a rhythm for my serve, Micah has found a rhythm for his serve, JT is starting to find his and (junior outside hitter Jake Arnitz) is slowly getting there.”

Serving has been a focal point in practice, especially since the last two games of the 2016 season, in which the Bruins were completely out-served.

UCLA managed only one ace, but 27 service errors, in a loss against a BYU team that swung for six aces and only nine errors in the penultimate game of 2016.

Then, in the NCAA semifinals, the Bruins improved only slightly, notching five aces and 26 errors during their loss to the Buckeyes who notched nine aces and 20 errors.

“We work on it every day because the last two final games of last season, that was our kryptonite,” Arnitz said. “So we’ve just been working on it a lot and we know that’s one of the most important parts of our game.”