No. 2 UCLA men’s volleyball suffers two losses against No. 4 BYU 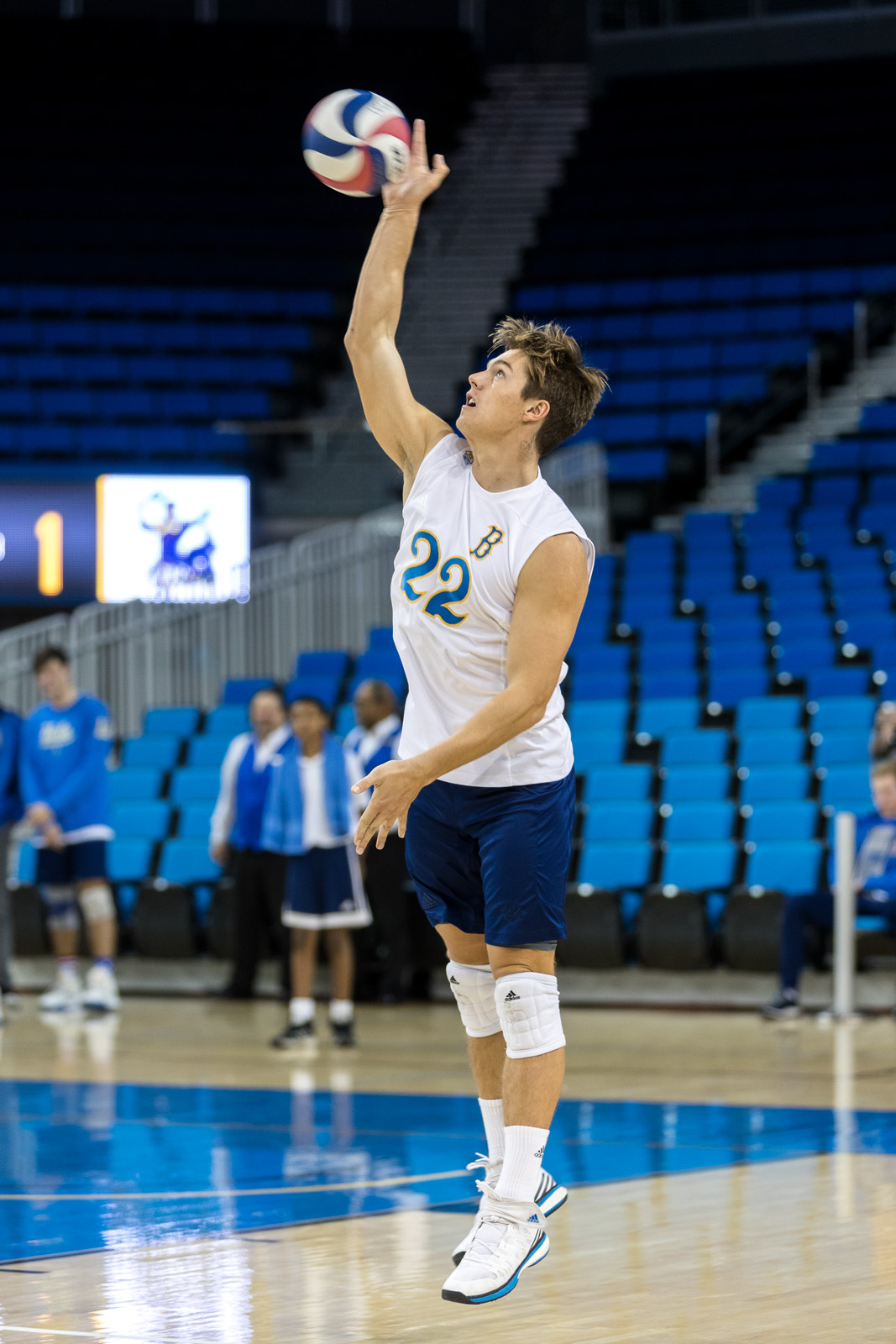 Senior Hagen Smith does not usually produce big offensive numbers, but against BYU, the setter notched 12 and 10 kills. The 12 kills Friday would mark a career-high. (Hannah Ye/Daily Bruin senior staff)

The No. 2 Bruins (9-3, 6-2 Mountain Pacific Sports Federation) dropped both games to the No. 4 Brigham Young University Cougars (9-2, 4-1) on Friday and Saturday in five and straight sets, respectively.

For both matches, the first set foreshadowed what would transpire throughout the rest of the game.

The first set on Friday went to BYU in overtime, finishing by a score of 28-26. The Cougars would then go on to win the second while the Bruins would nab the third and fourth. But in the final set, which was bookended by runs, BYU would again reign in the overtime victory 18-16 and take the game and match.

Despite the loss, it would be a career-night for a couple Bruins. Sophomore outside hitter Dylan Missry swung for a career-high 13 kills and added a career-mark 10 digs. Along with four other UCLA athletes, senior setter Hagen Smith would notch 12 kills while freshman middle blocker Daenan Gyimah roofed six block assists, both career-bests. Sophomore opposite/setter Micah Ma’a registered six aces, the most by a player in a MPSF match this season.

On the other side of the net, BYU junior opposite Ben Patch handed down 28 kills, a season-high.

“Even though it’s a thing we don’t like, we take some time to feel out an opponent,” said BYU assistant coach Jaylen Reyes. “So tonight we were way more familiar about what they wanted to do … from our end; we also served and passed the ball far better (Saturday).”

Before a crowd of over 4,500, the Cougars jumped out to a 7-1 lead and never relinquished the pressure en route to a decisive 25-13 set one win.

The Bruins finished the first set with a -.160 hitting percentage and would not crack even until midway through the second.

In set two, UCLA would battle back from more than five deficits, but seven service errors, one of which gave BYU the set, hampered any final push towards victory.

The final set, though, was different.

The Bruins were the aggressors this time and maintained leads until the very end. Three set points for the Bruins and two for the Cougars had the crowd on their feet. In a surprise move, BYU took out Patch, who made five service errors on the night, and inserted junior opposite hitter Tim Dobbert to serve. The move would pay off as BYU took a 30-29 lead then a block by junior middle blocker Price Jarman and senior outside hitter Jake Langlois sealed the win.

For the first time this season, Smith topped the UCLA leaderboard with 10 kills.

The loss of Stahl and Arnitz paved the way for other players to produce but was nonetheless a sizable loss as Stahl led the team in service aces and total blocks with 18 and 36, respectively, while Arnitz led, prior to the BYU games, in kills with 87.

Not only were the statistical losses felt but also the shear size was missed as both Stahl and Arnitz stand at 6-foot-7 while the Cougars have only one player that is listed under 6-foot-2.

With the two losses,UCLA men’s volleyball will have to wait to break the eight-year drought at Smith Fieldhouse in Provo.