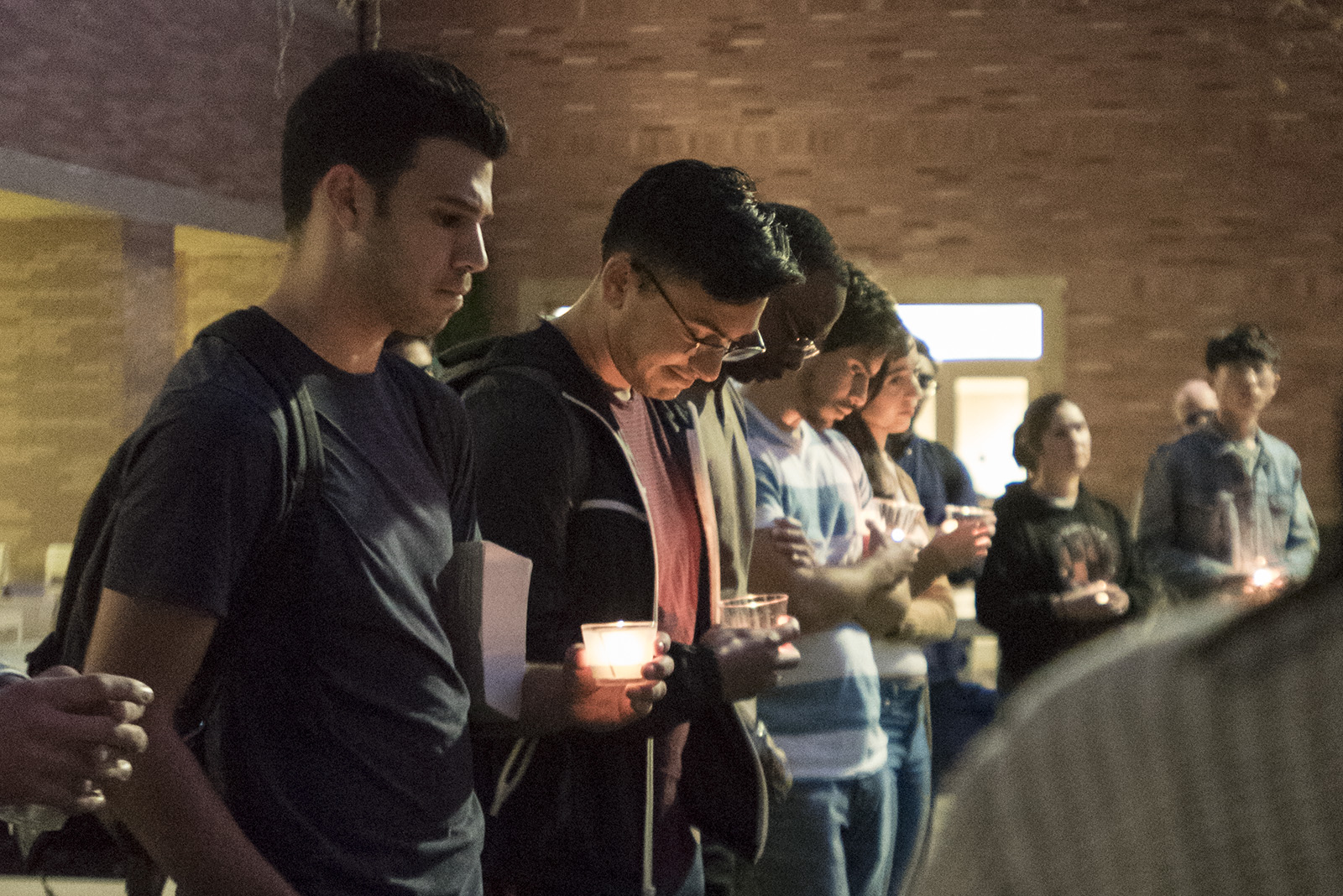 Holding candles and bowing their heads in quiet contemplation, UCLA community members gathered at the UCLA School of Law to support each other and heal after recent events affecting Muslim students and citizens. (Habeba Mostafa/Daily Bruin)

Law students and UCLA community members stood together in a large circle with heads bowed and candles in hand Monday evening.

About 60 people participated in the healing space on the UCLA School of Law courtyard hosted by the Muslim Law Students Association. The association said it wanted to help community members heal from recent events, including President Donald Trump’s executive order restricting travel of refugees and citizens of majority-Muslim countries.

“We hope you are all feeling strong and staying up,” the association said in an email to the law school community. “The past week has been particularly difficult for us, especially those who are directly impacted and bearing the brunt of the recent executive orders.”

About 150 UCLA students have been directly affected by Trump’s executive order in some way, said Chancellor Gene Block.

Aisha Sleiman, a member of the Muslim Law Students Association and law student, opened the event with a moment of silence. Then, several students shared their experiences with discrimination or offered support to students affected by Trump’s executive order.

“I feel like I’m that 9-year-old girl again,” said Sahar Khorramnezhad, a law student, referring to her memories of the Sept. 11, 2001, terrorist attacks. “And I just can’t understand why this country hates me so much.”

Khorramnezhad added she is worried her husband, who is in Iran working to get his green card, will not be able to enter the country she calls home after Trump’s executive order.

The executive order banned all Syrian refugees from entering the country indefinitely, all other refugees for 120 days and citizens of Iran, Iraq, Libya, Somalia, Sudan, Syria and Yemen for 90 days.

A few days later, a gunman fatally shot six people in a Muslim mosque as they prayed in Quebec City, according to The New York Times. Canadian Prime Minister Justin Trudeau called the shooting an act of terrorism.

On Monday, Trump fired Sally Yates, the acting attorney general, because she refused to support his executive order.

“Ms. Yates is an Obama Administration appointee who is weak on borders and very weak on illegal immigration,” the White House statement said. “It is time to get serious about protecting our country. Calling for tougher vetting for individuals traveling from seven dangerous places is not extreme. It is reasonable and necessary to protect our country.”

Yates sent a letter Monday afternoon to Department of Justice lawyers, directing them not to defend Trump’s executive order in court.

Several attendees were in tears as they expressed their frustration with recent discrimination against Muslims.

Nicole Jardim, a law student and member of the Black Law Student Association said she came to the event to support the Muslim community.

“I think when they’re hurting, we’re all hurting,” she said.

Firass Halawi, a law student, said recent events have reminded him that he is marginalized.

Halawi also said although he was pleased with the event itself, he is disappointed with the turnout.

“It’s disappointing at the same time, because it’s unfortunate that there are not more people out there supporting these issues,” he said. “It seems like Muslim lives aren’t worth as much as other people’s lives.”