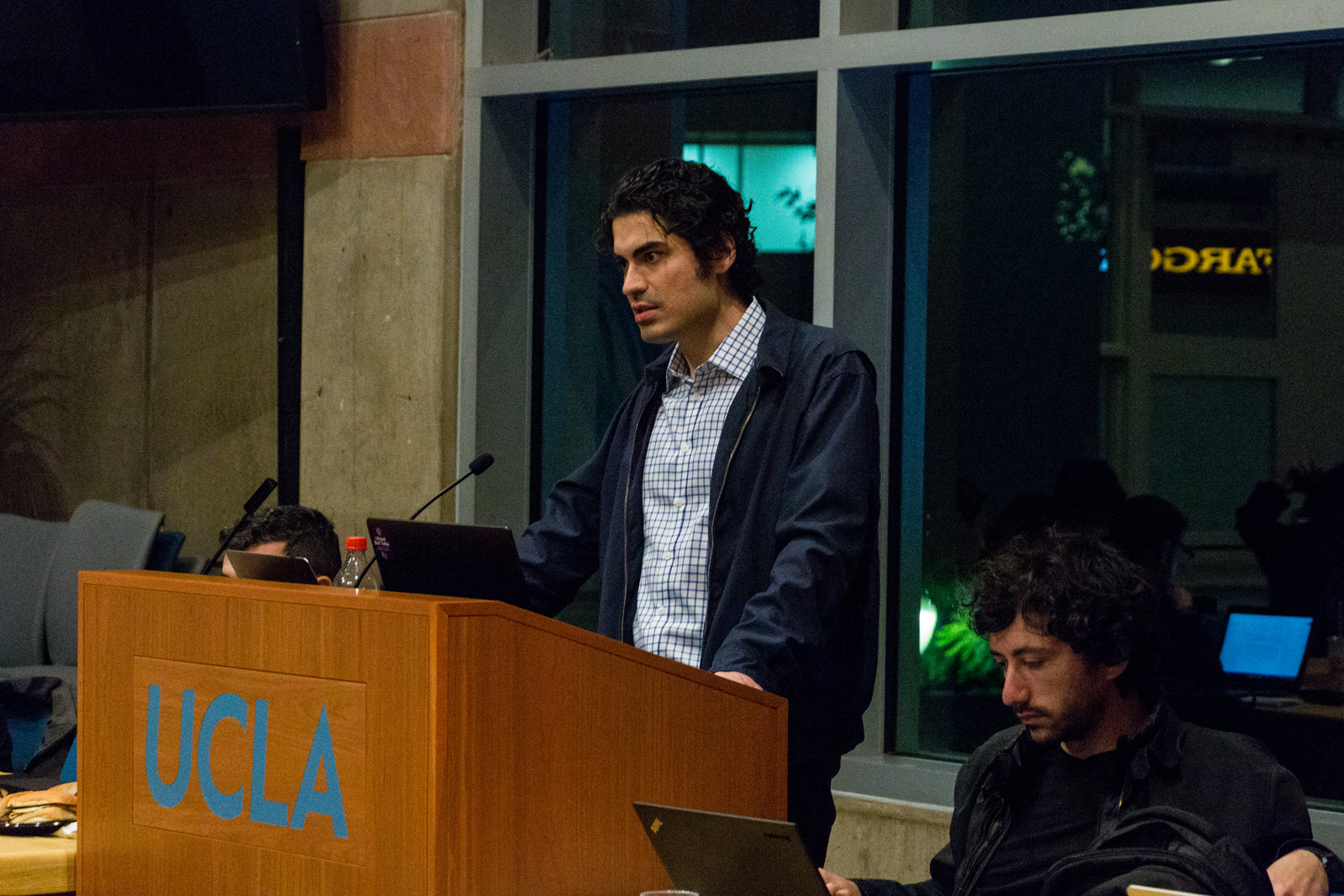 Some graduate students have been voicing concerns about a new travel grant program, and have brought their concerns to GSA forums. GSA President Michael Skiles said he thinks the program has been a large point of contention for graduate students. (Laura Uzes/Daily Bruin)

Some doctoral students are upset the Graduate Division is limiting the amount of travel funding they can obtain for research purposes.

The UCLA Doctoral Student Travel Grants for Conferences, Professional Development and Off-Campus Research Program, which launched in July, allocates up to $1,000 to doctoral students participating in research, conferences or other professional networking opportunities.

Before the new program, the Graduate Division gave departments money to fund students’ research and travel expenses, which departments would then give to students through different grants and fellowships. These grants are still available, but no longer include travel funds.

The new program is retroactive, so continuing doctoral students may only be eligible for the difference between the $1,000 and whatever amount they have received through grants, fellowships or departmental funds.

Chew said the division made the change because they were trying to avoid subjectivity in the grant decision process.

Lindy Comstock, a doctoral student in linguistics and representative on the Graduate Students Association Humanities Council said she was concerned about the fairness of the new policy and questioned whether it was necessary. She said she thinks the change is geared toward assisting South Campus students and may negatively affect North Campus students.

“There is a sense amongst the Humanities Council that we did lose sources of funding that were meaningful to us,” Comstock said.

She said the program now enables South Campus students to receive reimbursements to attend conferences, which previously was restricted to only those who give presentations at conferences.

Comstock said she thinks North Campus students typically have more projects to present and are expected to attend conferences to publicize their work and be competitive for the job market. While the funding is still there for them in the new policy, it is present in a more limited capacity because of the $1,000 cap, she added.

“Graduate Division should share with GSA officers its plans that affect graduate education,” Skiles said. “Ideally this dialogue should be happening, and happening very frequently. Continuing this dialogue will make sure changes help and don’t hurt students.”

Some graduate students said they feel the change would not benefit them.

Hannah Carlan, a doctoral student in anthropology, said she was not aware of the new policy until this fall, when she spoke with her adviser. She said the adviser told her she was only eligible for $300 in travel funding from the Graduate Division for the rest of her time at UCLA.

“They had retroactively deducted money that I had won for travel grants through my home department since I started in 2014,” Carlan said. “I had no control over the fact that that money had come from the Graduate Division, and would later be counted against me in the overall $1,000 that is now allocated for total travel funding during a graduate student’s career.”

Gabriel Suchodolski, a doctoral student in sociology, said he was not entirely aware of the changes, and therefore is unsure if this policy shift is beneficial or not.

“When you think about it, $1,000 isn’t that much (money) over five years,” Suchodolski said. “It could cover maybe two conferences.”

Additionally, the new policy applies exclusively to doctoral students, and does not include funding for students pursuing a master’s degree.

“Not many had been qualified for travel grants under old rules, but now none of them are,” Skiles said. “So many master’s (degree) students feel left behind by this new policy change.”

Some master’s degree students said they felt relatively unaffected by the policy shift.

Partha Bose, a financial engineering master’s degree alumnus, said he did not expect the university to fund his travel expenses during his time as a graduate student. He said he traveled to Chicago and New York for school while working on his master’s degree, but he funded the trips himself.

“Unless it’s for a PhD student, (funding) for travel is not as critical,” Bose said.

Sophia Law, a full-time MBA student said she had not heard of the policy change, but it did not affect her directly either way. She added she already receives partial funding for projects through clients that pay the UCLA Anderson School of Management for her thesis project team.

“However, I would have no other resources available if (travel funding) hadn’t been connected through my thesis,” said Law.