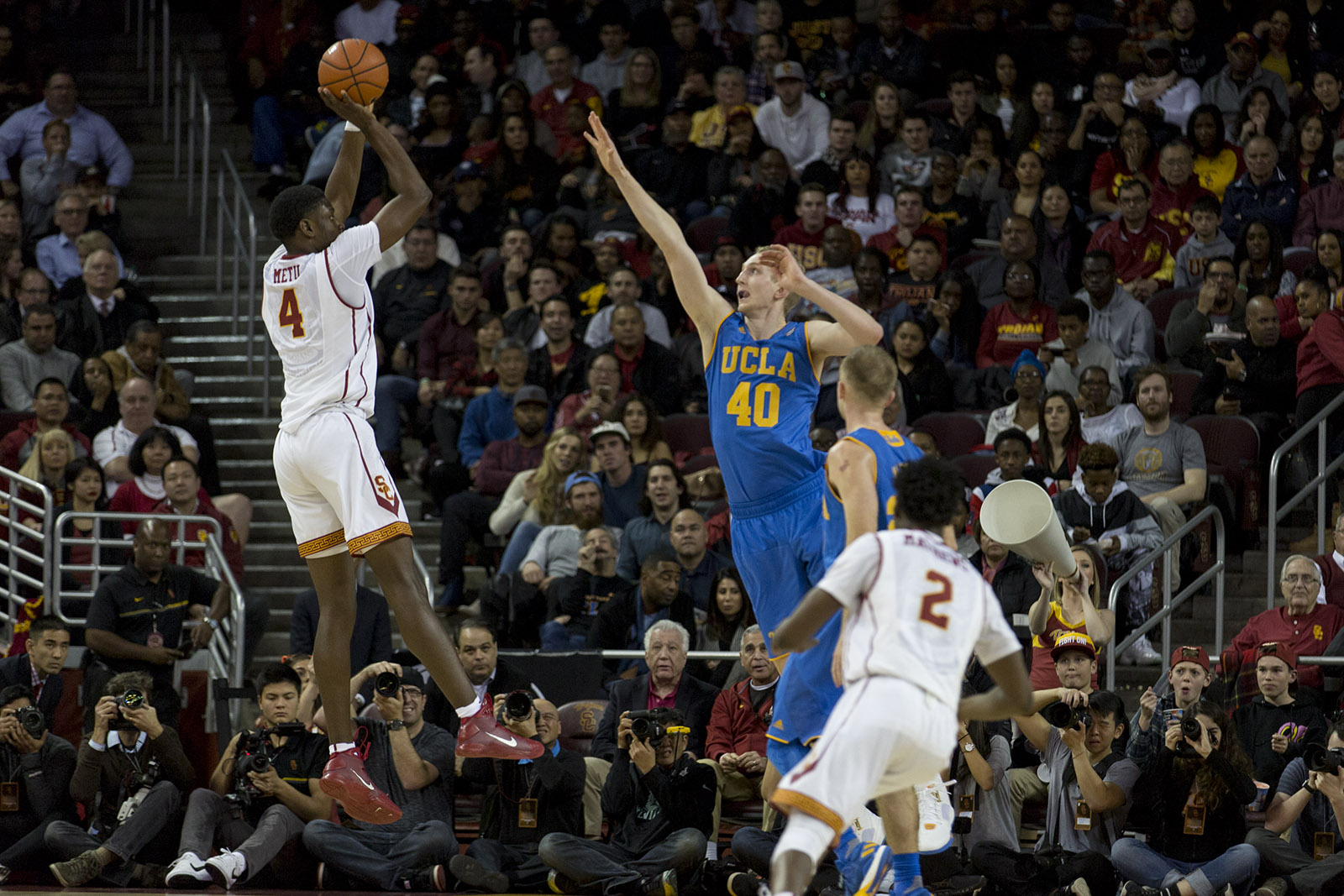 Against USC, UCLA’s junior center Thomas Welsh outperformed his season average in points with 13, but underperformed in rebounds, only pulling down seven on the night. Welsh was one of four Bruins to score in double digits. (Michael Zshornack/Assistant Photo editor)

No. 8 UCLA, which has benefitted all year from a tight-knit team dynamic, splintered in the face of adversity against its crosstown rival Wednesday night, falling 84-76 at USC for its second straight loss.

“We just had a team meeting – coach is frustrated, we’re frustrated,” said freshman point guard Lonzo Ball after the game. “We’ve gotta come together, and I feel like we went apart. … Adversity hit, and we all split ways.”

The adversity Wednesday came in the form of a USC zone defense that forced the normally crisp UCLA offense into an uncharacteristic 17 turnovers, including seven by Ball.

Early on, the Bruins seemed poised to run away with the game by taking advantage of the Trojans’ undersized man-to-man defense. They threw the ball into the post on nearly every possession to start the contest, and junior center Thomas Welsh began the game 5-for-5, helping UCLA build a lead as large as 10 points.

“We were going to get in foul trouble, or he was going to get 40 on us,” USC coach Andy Enfield said of Welsh.

So Enfield switched the Trojans into a zone, and the Bruins’ offense stalled. Over the final 13 minutes of the first half, UCLA turned the ball over 11 times and failed to hit a single 3-pointer as USC built a 12-point halftime lead on a healthy helping of transition opportunities.

Though the Bruins took better care of the ball in the second half, the Trojan zone held them to just 42.4 percent shooting from the field. Senior guard Isaac Hamilton poured in 17 points in the period, but fellow senior guard Bryce Alford failed to find a rhythm. He finished with just three points, his fewest in a game since his sophomore season.

The Trojans’ zone featured extended pressure and, with their four-guard lineup on the floor, plenty of speed, helping to take away the 3-point looks that often come against a zone. The Bruins, who average 11 3-pointers a game, hit just six on Wednesday.

On the other end, USC hit a season-high 14 3-pointers, many of them open looks from favorable spots. When the Bruins would trim the lead, the Trojans would counter with a bucket from deep.

With just under eight minutes left in the game, UCLA had moved to within four points, only to leave USC point guard Jordan McLaughlin wide open for a corner 3, which he drilled.

Sitting on the end of the Bruin bench near the scorer’s table, video coordinator Kory Alford slammed his clipboard against his head.

It was far from the only scene of frustration for the Bruins.

There was Ball, after throwing the ball away for one of his seven turnovers, committing a reach-in foul at halfcourt, igniting chants of “OVERRATED!” from the sellout crowd at the Galen Center.

There was freshman forward T.J. Leaf, after being called for a foul and subbed out of the game, forcefully snatching a towel and heading to the end of the bench, where he stood alone while he composed himself.

Then, of course, there was the team meeting afterward.

“I think on the court when adversity hits, everybody gets in their little shell, nobody talks to each other and that makes it tough,” Hamilton said. “You’ve got to have guys help each other constantly just to build that confidence. And that’s what we talked about. Hopefully that helps.”