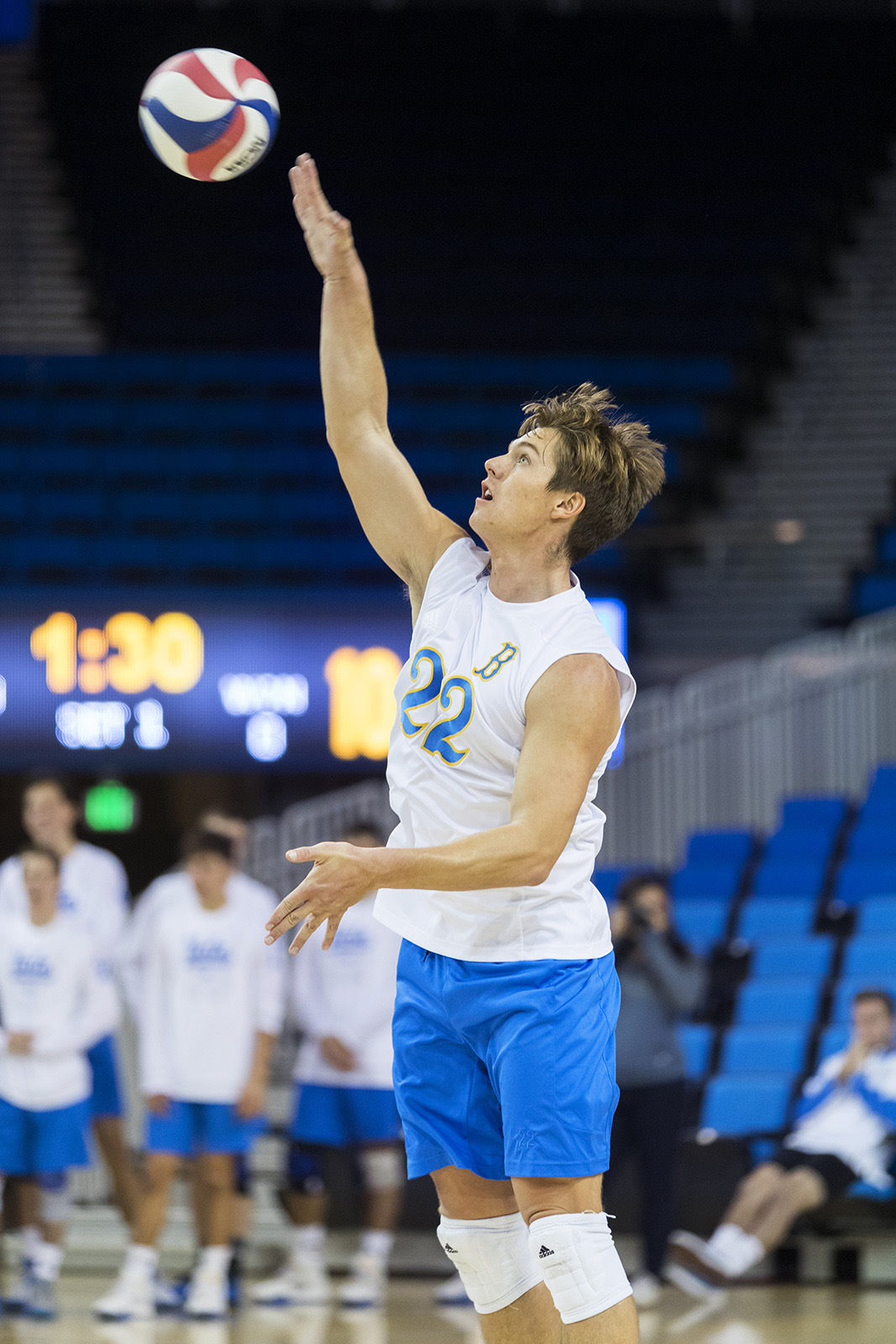 Senior setter Hagen Smith finished off the night with four kills and 15 assists in the Bruins’ sweep of UCSB. UCLA will travel to Santa Barbara to face UCSB again on Friday, concluding the two-game series. (Hannah Ye/Daily Bruin senior staff)

After their loss in Westwood, the Gauchos have less than two days to figure out how to combat the Bruins during their next showdown.

This is the first game in the home-and-away series between the two teams, with the second match taking place Friday in Santa Barbara.

UCLA took an early lead 18-6, as senior middle blocker Mitch Stahl hit .750 in the first set. It took the Bruins three set points, but they finished off set one with relative ease, 25-17.

“We know UC Santa Barbara’s a good team – they can scrap and really make you work for it,” said senior setter Hagen Smith. “I think we just found a rhythm and kept that pretty consistent throughout.”

The Gauchos didn’t let the home team take the rest of the game that easily. They took their first lead in the match during set two, 9-6, but weren’t able to hold onto the lead for long.

“In our conference, you don’t think it’s ever going to be a one-sided affair, and I don’t think this was one-sided,” said assistant coach John Hawks. “In the second set, they came out and put a lot of pressure on us. It just happened to be that we went on a little run in the middle of the set, and that made the difference.”

Sophomore setter/opposite Micah Ma’a served up an ace to tie things up at 14. The Bruins were the first to 20, and claimed the second set 25-20.

“Micah and I, we were working on our back sets to each other,” Smith said. “Because we have to split the time setting and hitting, we have to figure out when and how much is good enough.”

UCLA continued to control the match from there. UC Santa Barbara trailed by as many as seven points in the last set, and failed to close the gap.

The Bruins took set three 25-20 for a sweep against the Gauchos.

“The (UC Santa Barbara) setter did a nice job distributing the ball,” Hawks said. “They probably didn’t get the production out of the middle that they expected, but credit to our guys for following the game plan.”

Stahl finished the night with six kills, three aces and three blocks. His serving against the Gauchos pushed him up to No. 2 on the all-time rally scoring era school list, with 99, behind Gonzalo Quiroga, who played from 2011-2014 and had 194 rally scores.

Junior outside hitter Jake Arnitz led the team in kills with 10 for the night, followed by freshman middle blocker Daenan Gyimah who notched eight.

“I think just being in this arena, it kind of freaks people out,” said junior opposite Christian Hessenauer. “On Friday, I think (UC Santa Barbara) will really bring the competition. So we’re just going to expect a bit of a different team.”