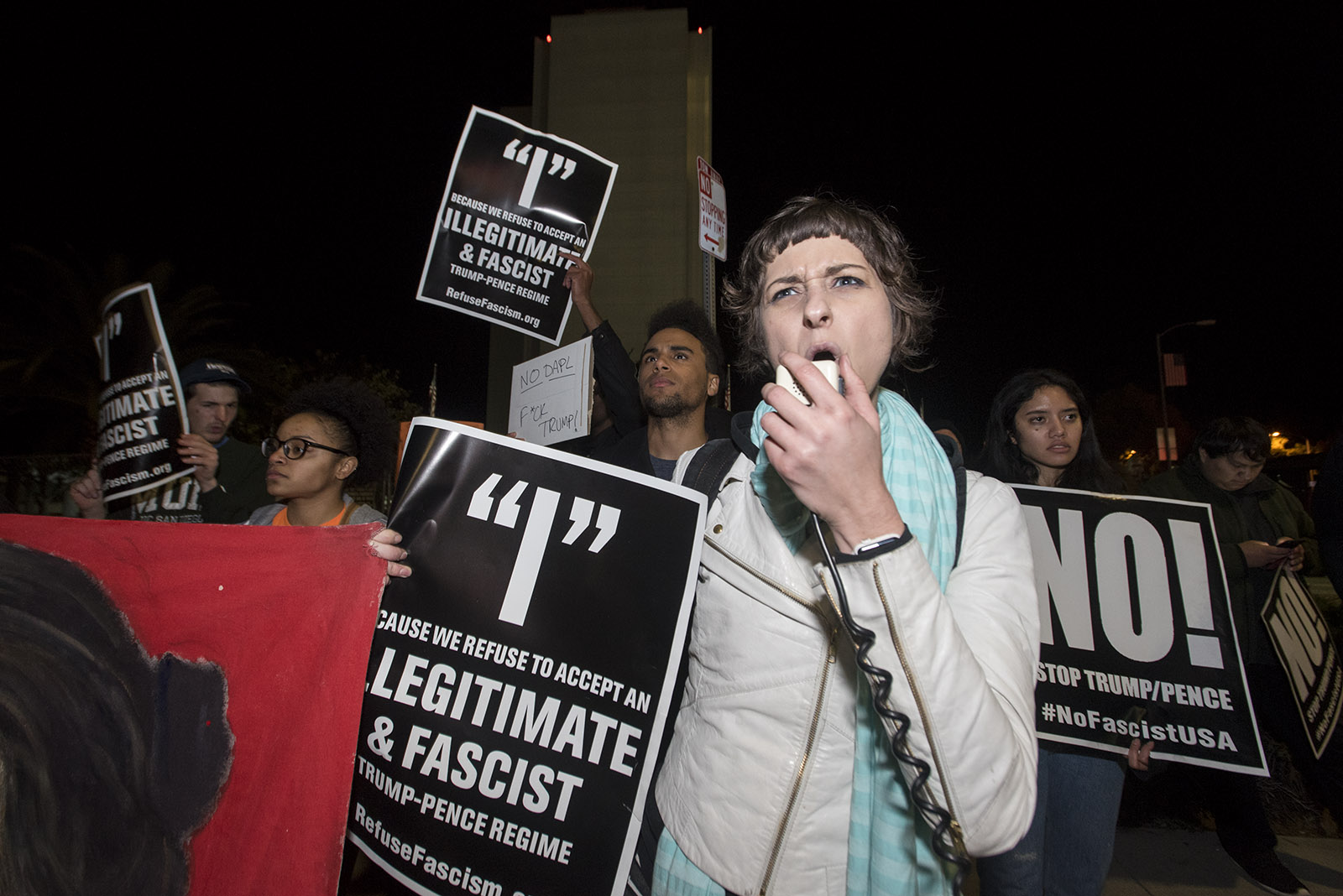 People protested the Dakota Access pipeline Tuesday by blocking traffic and participating in a round dance on Weyburn Avenue and Westwood Boulevard. (Jintak Han/Assistant photo editor)

Hundreds of people participated in a round dance, an American Indian tradition, on Weyburn Avenue and Westwood Boulevard on Tuesday night, blocking traffic in protest of the Dakota Access pipeline.

California for Progress, an organization that aims to support progressive causes, and the American Indian Movement, an advocacy group that works to support American Indian rights, organized the rally Tuesday morning after President Donald Trump announced he would allow construction to move forward. The 1,200 mile-long pipeline would run across the Missouri River – the principal source of water for the Standing Rock reservation in North Dakota – and through sacred burial grounds.

Protesters have been leading the movement against the development of North Dakota Access pipeline, termed NoDAPL, for several months to prevent the pipeline from being built. Critics say construction of the pipeline would damage historically and culturally significant sites. They also say if the pipeline leaks, it would contaminate drinking water and negatively affect the reservation.

After dancing, protesters marched back to Wilshire Boulevard and Veteran Avenue, chanting ‘Water is Life,” You can’t drink oil, keep it in the soil” and “Not my president.” Protesters blocked traffic as cars honked repeatedly in support. Participants continued to dance and play the drums in the crowd.

The protest remained peaceful and police helped protesters block traffic and obtain parking at the Wilshire Federal Building, said Frances Fisher, an actress and activist who helped organize the rally.

Fisher, who advocated for Sen. Bernie Sanders during his presidential campaign, said Sanders’ supporters decided to mobilize for other issues after he lost the Democratic nomination. Some People for Bernie members merged into California for Progress.

Fisher said after Sanders lost the nomination, she went to Standing Rock for two weeks because she was touched by the movement. She said she thinks the NoDAPL movement is in line with values shared by former Sanders supporters.

California for Progress and the American Indian Movement have been working together for months to organize rallies at Standing Rock and in Los Angeles, she added.

“It’s a sad day,” Fisher said. “ You have to go low and hit bottom. … That’s what galvanized people.”

Fisher said the Women’s March on Saturday is an example of how people’s disapproval of Trump has encouraged people to be active. She added she is disappointed people didn’t see through what she called Trump’s lies.

“He (and his cabinet) represent everything greedy and evil in human nature,” she said. “I was upset even though I knew this was coming. But you can be angry and get on Facebook or you can organize.”

Fisher added she hopes the rally will help encourage others to see that Trump does not reflect the right values.

“This is a rally to bring people together, to hold each other up,” she said. “We’re here to express that he’s going in the wrong direction.”

Tuesday night’s protest was the first demonstration in Westwood against the pipeline since the inauguration. Fisher said similar rallies were organized in Chicago, Washington, D.C., and other major cities.

In October, a number of UCLA students from the American Indian Student Association traveled to North Dakota, standing in solidarity with the Sioux tribe.

More than 100 UCLA students protested on Janss Steps and Royce Quad a month later in an event organized by the American Indian Graduate Students Association.