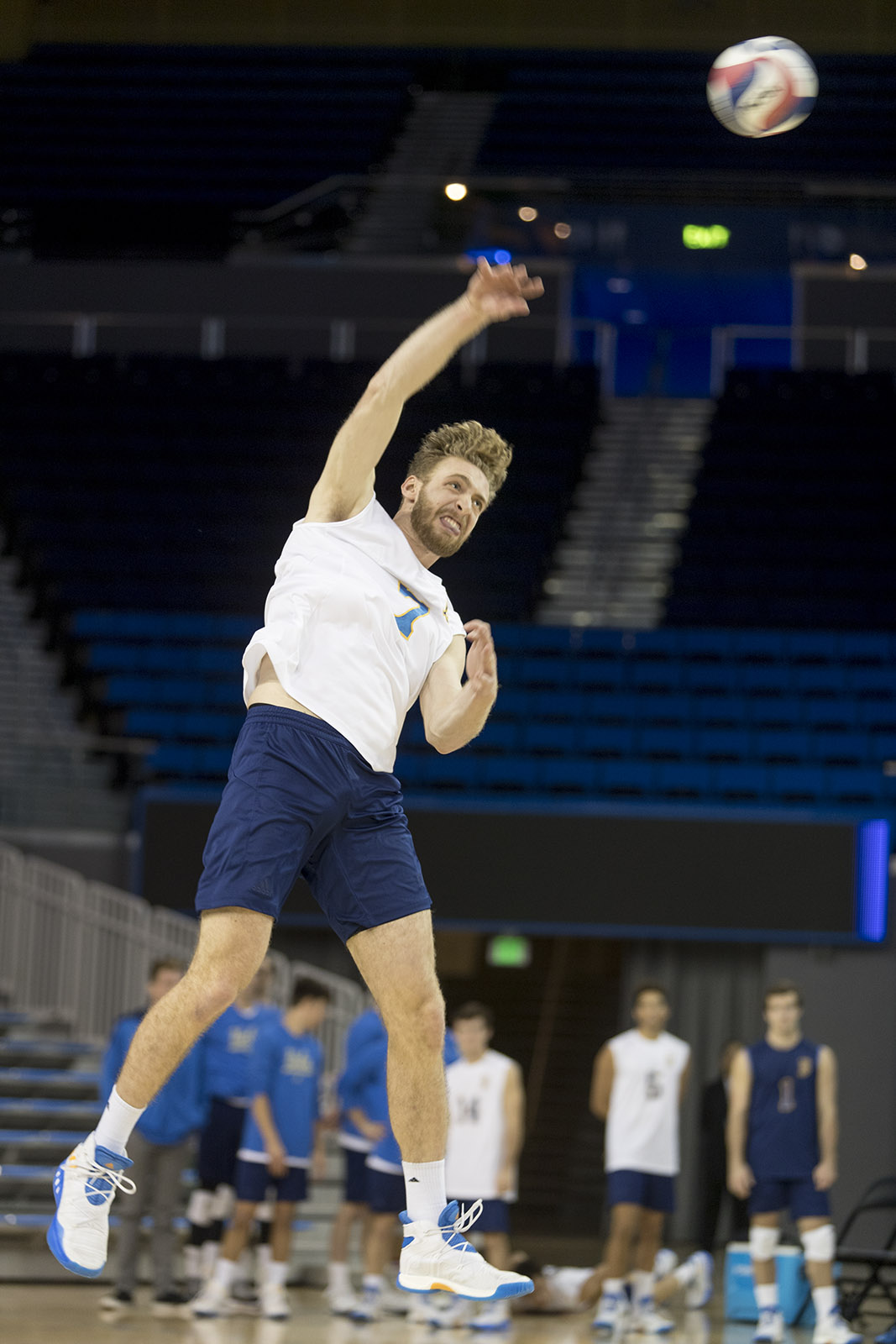 Senior middle blocker Mitch Stahl has been integral to the UCLA men’s volleyball team’s success over the past couple of years. This year, Stahl has continued his role of consistent veteran while playing alongside newcomer freshman middle blocker Daenan Gyimah. (Hannah Ye/Daily Bruin senior staff)

The middle blocker’s addition to the team brings depth to the No. 2 Bruin squad (6-1, 4-0 Mountain Pacific Sports Federation) at an already stacked position.

“We actually have a number of options. I think (redshirt junior) Eric Sprague has come back better, we’ve added Daenan, obviously we have (redshirt junior) Oliver (Martin) and (senior) Mitch (Stahl) who were starters last year,” said coach John Speraw. “I think we’re probably as deep in the middle as anyone in the country.”

Gyimah and Stahl have dominated playing time and have both consistently put up strong numbers thus far this season.

Gyimah leads the team hitting .563 and is second to only junior outside hitter Jake Arnitz in total kills. The freshman’s hitting percentage is currently higher than the UCLA single-season record of .539, set in 1994.

Martin and Stahl held spots in UCLA’s starting rotation last season, and while Stahl has held onto his spot, Speraw said that Gyimah is the second starter for now.

“You have to scheme for (Gyimah); he’s a unique offensive talent. He’s a unique tactical problem for other teams,” Speraw said. “But Oliver is going to play this year and he knows he’s a real important member of this team.”

Stahl, while not posting quite as high offensive numbers as Gyimah, still has a season hitting percentage of .359 and leads the team with 28 blocks. The veteran middle moved up to fourth on UCLA’s Career Block Assists Leader list with his 263rd block.

“Mitch is still doing a great job but (Gyimah) is a freshman and it takes a while to learn how to block,” Speraw said. “He’s long and stuffs more balls than people think and I think he’s going to be a great blocker. So, there’s still some developmental phases.”

They’re not just front row threats – both middles are also valuable for their serving efforts. Stahl leads the team with nine aces and Gyimah is close behind with six. After UCLA’s sweep of UC San Diego, Speraw said that Stahl’s serving runs were instrumental in putting the Bruins over the top in the first couple sets.

While the two players are similar in their contributions to the team, they are at the opposite ends of the spectrum of collegiate volleyball experience.

Prior to this season, Stahl had started 68 matches and has been a three-time All-MPSF honoree, along with a second-team All-American in the 2016 season. In his senior season, he has been named a pre-season first-team All-American by Off the Block.

“Mitch has really grown in his personality and emotional control,” Speraw said. “He can really add from a leadership perspective because he really is much more in control. He’s become a really complete volleyball player.”

While Stahl brings leadership, Gyimah could be the breath of fresh air to reinvigorate this experienced UCLA team, and is on track to be a more than satisfactory replacement for Stahl in the future.

“We have a really deep team so it helps a lot just playing each other, each side of the team,” Martin said. “We’re competing with each other so it’s a constant battle even in the gym. It’s like just playing any other team, so that really helps a lot.”